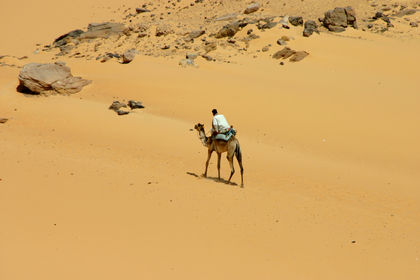 The living standards of Libyans have improved significantly since the 1970s, ranking the country among the highest in Africa. Urbanization, developmental projects, and high oil revenues have enabled the Libyan government to elevate its people's living standards. The social and economic status of women and children has particularly improved. Various subsidized or free services (health, education, housing, and basic foodstuffs) have ensured basic necessities. The low percentage of people without access to safe water (3 percent), health services (0 percent) and sanitation (2 percent), and a relatively high life expectancy (70.2 years) in 1998 indicate the improved living standards. Adequate health care and subsidized foodstuffs have sharply reduced infant mortality, from 105 per 1,000 live births in 1970 to 20 per 1,000 live births in 1998. The government also subsidizes education, which is compulsory and free between the ages of 6 and 15. The expansion of educational facilities has elevated the literacy rate (78.1 in 1998). There are universities in Tripoli, Benghazi, Marsa el-Brega, Misurata, Sebha, and Tobruq. Despite its successes, the educational system has failed to train adequate numbers of professionals, resulting in Libya's dependency on foreign teachers, doctors, and scientists.

Many direct and indirect subsidies and free services have helped raise the economic status of low-income families, a policy which has prevented extreme poverty. As part of its socialist model of economic development,

the Libyan government has weakened the private sector and confined it to mainly small-scale businesses. While this policy has damaged the Libyan economy significantly, it has also prevented the accumulation of wealth by a small percentage of the population. While the ruling elite (i.e., top civil servants, military officers, and politicians), enjoys much higher living standards compared to average Libyans, and corruption exists within its ranks, Libya is not a highly polarized society divided between extremes of wealth and poverty.

Wow -- good information; thanks! I will forward it to friends. I'm looking forward to reading your information on other countries.
2
Ron Nakatsui

This is what I have found on the internet

Here is the Libya information. "Many direct and indirect subsidies and free services have helped raise the economic status of low-income families, a policy which has prevented extreme poverty."
4
Patrick J Dorrian

If this is what an undemocratic Libya was like why does the west want to change it? 2 answers, toexploit the oil wealth and enlarge the private sector to increase the poverty. Jolly good show