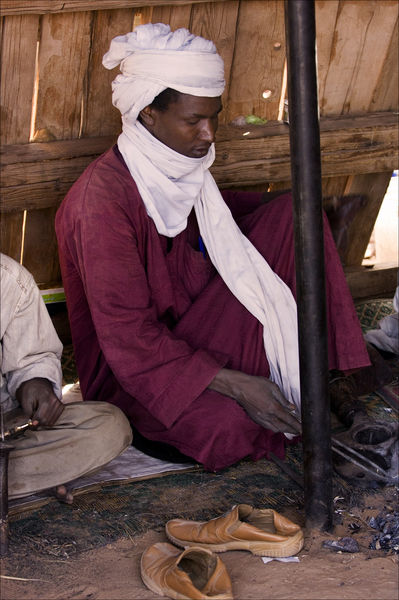 The Libyan labor law provides for wages and pensions, but prohibits independent trade unions. The government-created National Trade Unions' Federation is the only legal workers' organization. The labor law does not provide for the right to strike, but Qadhafi has confirmed its existence. Collective bargaining is not allowed, since the government must approve all labor agreements. The minimum age of labor is 18, the maximum work week is 48 hours, and the average monthly wage is roughly 270 dinars. At the official exchange rate, this works out to roughly US$750 a month, but is only US$100 at the unofficial (and more realistic) rate. The labor law provides for the equality of women with men, but traditional social restrictions on women's activities outside the home limit the practical effects of the law, and therefore create barriers to full participation of women in the workforce. Foreign workers may be denied rights provided for Libyan workers, and there are restrictions on their repatriation of income.

Libya's workforce is about 1.2 million strong as estimated in 1997. There are also 1 to 2 million foreign workers. The majority of the workforce are government employees. Unemployment was estimated at about 30 percent in 2000. The high unemployment rate is the result of years of sanctions as well as Qadhafi's efforts at preventing the emergence of a viable and growing private sector. Sanctions have been particularly effective in harming Libya's oil and gas exports, thus constraining economic security for many Libyans who directly or indirectly rely on these industries. Large infrastructure projects, financed by the government, also depend on export revenues. Thus, a decline in the activities of the oil and gas industries and large governmental projects has reduced employment opportunities, resulting in a large unemployment rate. This situation will likely change in the near future. In the aftermath of the 1999 suspension of UN sanctions, the growing interest of the European oil companies in the Libyan energy industry will increase its exports, which in turn will generate funds to be invested in the expansion of the industry and also in many other government projects. In short, the revival of the energy industry will surely help reduce unemployment in Libya.

I'm foreign worker here in libya working in a foreign construction company.
I just want to know if we work on rest days such as friday will be considered as double pay or how, and/or if considered payed.

i am from Nepal.How can we come there?Because there is no Embassy of Libiya.
3
Marjorie Ramirez

I am Filipino. I just had my operation few days ago (APPENDECTOMY). Please send me some info regarding the Sick Leave as per Libyan Labor Law. Thanks...
4
Prasad Rai

We are supplier company and wish to supply our skilled workers through your media. We have all categories of worker can be sent immediately.
5
Collins

I am a Nigeria living in UAE I Will like to come and work in Libyan if I have the chance but I need to be assure good secure.
Please if any am available
Thanks