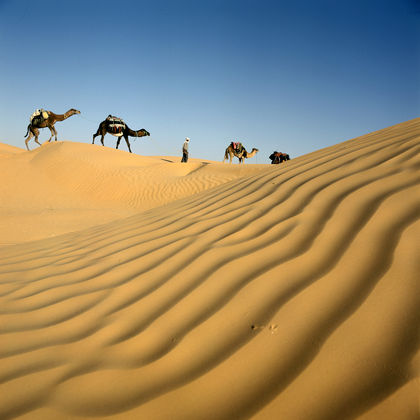 Democratic and Popular Republic of Algeria

Algeria is located in North Africa, bordering the Mediterranean Sea. It shares borders with Morocco, Mauritania, Mali, Niger, Libya, and Tunisia. Taken together, Algeria, Morocco, and Tunisia form what is known as the Arab Maghreb or West. With an area of 2,381,740 square kilometers (919,595 square miles) and a short coastline of 998 kilometers (620 miles), Algeria is the second largest country in Africa after Sudan, and is slightly less than 3.5 times the size of Texas. Algeria's capital city, Algiers, is located in the north on the Mediterranean Sea. Other major cities include Annaba and Oran, both in the north.

The population of Algeria was estimated at 31,193,917 in July of 2000, an increase of 6.2 million from the 1990 population of 25,010,000. In 2000, Algeria's birth rate stood at 23.14 per 1,000, while the death rate was reported at 5.3 per 1,000. With a projected growth rate of 1.7 percent between 2000 and 2015, the population is expected to reach 39.8 million by the year 2015. Muslims, mostly of the Malekite Sunni tradition, make up 99 percent of the population, while Christians and Jews make up the remaining 1 percent. A small percentage of the population are the indigenous Berbers, who speak Tamazight. Since 1995, the Berbers have been given wider autonomy and have been allowed to speak and teach their language. Arabic is the official and dominant language.

Algeria's population growth has slowed significantly since the early 1990s, reaching 2.8 percent in 1998, down from 3.06 percent in 1987. The slowdown is mostly attributable to a falling birth rate, which is now 2.15 children per family. Population growth is expected to drop even further in the coming years. The success of the Algerian government's family planning policies has ensured wider access to contraceptives and family planning education. The Comite national de la population (CNP) was established in October 1997 to oversee and coordinate national planning policies.

The population is generally young, with some 35 percent below the age of 14 and just 4 percent older than 65. Given the population makeup and the significant drop in the population growth rate, the government is faced with the daunting challenge of creating new employment opportunities, and is bracing itself for an aging population in the coming decades. Algeria's young population has also been a source of political instability, feeding an anti-government Islamic backlash that began in the early 1990s. Unemployment and limited job opportunities are largely responsible for an Islamic insurgency that has destabilized the country since 1991.

As in many developing countries, a majority of Algerians live in urban areas. In 1997, 60 percent of the population was urban, an increase of 29 percent from 1966, but the trend toward rural-urban migration is believed to have leveled off. Most of the population is

concentrated in the north, with the capital Algiers and its suburbs being home to the largest concentration of Algerians; 4 million people live in the capital.

Though Algeria's location would suggest that the country would have a booming fishing industry, actual fishing production remains low, largely due to under-exploitation. Since the late 1990s, the government has embarked on a modernization program to increase the productivity of the sector, but most fishing activity continues to center around small boats and family-owned businesses. The government has also been trying to attract foreign investment in this sector, in the year 2000 granting some 20 Japanese fishing boats the right to fish in Algerian waters. This agreement was based on a provision that the catch does not exceed 750,000 metric tons of red tuna a year.

Hydrocarbons, mainly oil and gas, are the country's main exports. Algeria's oil and gas reserves rank 14th and 5th largest in the world, respectively. During the 1970s, Algeria was a large producer of oil, but has since lost that status as oil was replaced by gas production as the country's main source of export revenue. Oil, first produced in commercial quantities in the late 1950s, accounted for 73 percent of Algeria's hydrocarbon productions in 1980, but now accounts for about 20 percent. France, Spain, Belgium, Turkey, and the United States are the main consumers of Algeria's oil, and plans are underway to expand export activities, mainly to Europe. Although most restrictions on oil exports were removed in the 1990s and the government no longer subsidizes the sector, the state-owned company Sonatrach continues to retain full control over its activities.

The oil sector opened to foreign investment in 1991. As a result, foreign companies are now allowed to invest and even buy existing oilfields, and despite the high political risk associated with these investments, several foreign companies operate in the country in 2001. A total of 18 foreign companies operate in the oil sector, bringing in around US$1.5 billion in investments. Natural gas production began in 1961, and in 2000 represented 57 percent of total proven hydrocarbon reserves. Algeria is the second-largest exporter of liquid natural gas in the world after Indonesia. The bulk of Algeria's gas is exported to Europe through 2 major pipelines that run through Tunisia and Morocco. Since the late 1990s, the government has been engaged in efforts to upgrade and expand oil and liquefied natural gas exploration by attracting foreign investments. It has also moved to increase the production of liquefied petroleum gas as a means to diversify income from this sector.

Algeria's non-hydrocarbon mining infrastructure remains underdeveloped. In addition to oil and natural gas, Algeria mines gold in the southeast Hoggar region and diamonds near the Mali borders, and exports high-grade ore, iron pyrites, phosphates, lead, zinc, mercury, barite, and antimony. Since the late 1990s, the government has made progress in removing restrictions on foreign and private investment in the non-energy mining sector in an effort to minimize the state's control over the sector. The sand, marble, and gold sectors have received special interest from small private investors.

The non-hydrocarbon manufacturing sector is a moderate though declining contributor to the Algerian economy. According to the EIU Country Profile for 2000, though manufacturing accounted for 12 percent of GDP in 1993, its contribution fell to 9 percent in 1999. The decline in manufacturing's contribution to GDP can be attributed mainly to the legacy of centralization and inefficiency that have characterized the state enterprises controlling the sector. Algeria's manufacturing industries are beset by an oversized bureaucracy and debt, and have, as a result, lost their ability to compete with imported finished products. The government's efforts since the 1980s to restructure the industrial sector into smaller state-run units and encourage joint ventures with the private sector have failed to produce the desired turnaround.

Before independence, food processing, textiles, cigarettes, and clothing constituted the main manufacturing activities in the country. Since the mid-1960s, a greater emphasis has been placed on heavy industry. Historically, Algerian companies have processed petro-chemicals, steel, metals, electronics, clothing, leather, paper, timber, chemicals, and construction equipment. Petrochemicals are an important contributor to GDP. Petrochemical industries include methanol, resins and plastics, and fertilizers, and are centered in the 2 cities of Skikda and Arzew. Production in the private sector recorded a 10-percent increase in 1999, in contrast to the non-hydrocarbon industrial state sector, which saw a drop in output of 1.5 percent in 1999. The pharmaceuticals, chemicals, construction equipment, and leather industries were the leading performers.

Financial services in Algeria are fairly outdated, and the lack of modern services is an obstacle to the growth of the private sector and foreign investment alike. Until 1998, the banking sector was dominated by 3 major state-owned banks. But private banks, including U.S. and French banks, have been allowed to operate in the country since 1998 as part of a government plan to reform the sector. A new money and credit law was adopted in 1990, and although the Treasury purchased most of the local banks' debt in 1994, these banks continue to suffer from bad loans , mismanagement, and political interference. The Algerian stock exchange was officially opened in 1999, also part of the government's plan to privatize the economy.

Tourism is not a major contributor to GDP, despite government efforts to encourage the sector. Its promising potential is stifled by a lack of investment and the endemic political violence in the country, although the south, where some of the government's most recent projects are located, has been spared from these problems. Potential holiday destinations are the mountains and deserts of the interior and the country's beaches. Although foreign tourists have since 1998 started returning to Algeria, the sector has a long way to go to full recovery.

Lacking many large commercial centers other than Algiers, Oran, and their suburbs, Algeria has a poorly developed retail sector. While Algiers is home to a variety of retail stores, the majority of towns in the interior of the country have small family-owned shops, farmer's markets, and temporary roadside stands.

Algeria has no territories or colonies.

The Embassy of Algeria in Washington, D.C. <http://www.algeria-us.org> . Accessed August 2001.

I LOVE LOVE LOVE THIS WEBSITE IT SHOWS ME EVERYTHING I NEED TO KNOW FOR MY PROJECT. ALSO, I WAS LOOKING FOR SOMETHING LIKE THIS AND I FOUND IT AT LAST.