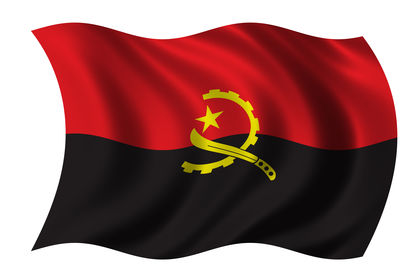 Angola is located in southern Africa, and borders the South Atlantic Ocean, Namibia, Zambia, and both Congos—the Democratic Republic of Congo and the Republic of the Congo. Angola has a total area of 1,246,700 square kilometers (481,351 square miles). It has a coastline of 1,610 kilometers (1,000 miles) on the South Atlantic Ocean. Comparatively, the area is slightly less than twice the size of Texas. The capital of Angola, Luanda, is located on the north-central coastline. The highest point in Angola is Morro de Moco at 2,620 meters (8,596 feet). Angola also includes the exclave of Cabinda (an exclave is an area of land that is part of another country but separated physically from that country). A province of Angola, Cabinda's size is roughly 7,300 square kilometers (2,800 square miles), and it lies south of the Republic of Congo on the Atlantic coast.

The population density in 1995 was 8.8 people per square kilometer (18.1 people per square mile). The urban population has increased slowly but steadily from 31 percent in 1995 to 33.6 percent in 1999. The illiteracy rate in Angola is very high; only 42 percent of people over the age of 15 can read and write. There is a significantly higher number of men who are literate than women (56 percent versus 28 percent).

There have been attempts at coffee production during the conflict, but continued fighting has made the sector's recovery impossible. There are several advantages to focusing on coffee production in Angola. First, it is an area where Angola can compete in the global market, hence supplementing oil as a major income generator. Second, Angolans have a lot of experience in the production of coffee. Third, the fertile land is well disposed to the cultivation of coffee. Today, the coffee industry is moribund. The U.S. Department of Agriculture estimates Angola's total coffee production for 2001 will be 65,000 bags of coffee (each weighing 60 kilograms). This is up slightly from 55,000 bags for the previous year. In contrast, Mexico was expected to produce 5.8 million bags, and Kenya's production was estimated at 1.1 million for 2001. Angola is not even on the list of the top 35 suppliers of coffee to the United States.

The fishing industry in Angola prior to the war was very important, and annual catches were about 600,000 tons. This shrank to only 35,000 tons during the war, but began to rise from 1993, when the catch was 122,000 tons, and this trend has continued. Angola has been building up its fishing fleet with the support of Spain, Italy, Portugal, and the Arab Bank for African Economic Development (BADEA). The World Bank helped the Angolan government set up the Angolan Support Fund for Fisheries Development. Angola has a long coastline which is especially rich with sardines, tuna, and mackerel. There is great potential for continued expansion in this sector.

Industry is the most important sector in Angola's economy, accounting for 53 percent of the GDP. The 3 important industrial sectors are mineral resources, energy, and manufacturing, the former two being by far the most significant. All of these were severely affected by the war, but since 1994 have increased significantly.

Angola has vast deposits of a large variety of mineral resources including diamonds, gold, iron ore, phosphates, copper, lead, and zinc. However, the most important mineral with respect to export is diamonds. Prior to 1975 Angola was the fourth-largest diamond producer in the world, but this dropped during the war because of large-scale theft, smuggling, and transportation problems. UNITA controls the majority of the diamond-producing land, which has added to the government's problems in controlling the diamond trade. In 1992 Angola exported diamonds worth $250 million. While diamond exports are increasing, they have not reached pre-war levels. With a stable peace agreement there should be no obstacles keeping Angola from reaching and exceeding former export levels.

Apart from diamonds, Angola's resources are vast, but largely untapped. The Angolan government's efforts to promote private investment led it to abolish the previously state-held monopoly of mineral rights. (This began on a small scale in 1986 in relation to diamonds). Mining ventures can consequently be privately held. However, the continued conflict makes it difficult to attract private investment, and these resources remain untapped.

Angola is a regional player in energy production. Angola co-ordinates the energy policy for the Southern African Development Co-ordination Conference (SADCC), and its energy secretariat is based in Luanda. Energy production is essential for Angola, with 90 percent of the country's total exports coming from oil. In 2000 oil contributed 45 percent to the GDP of the country. Energy is the only sector that expanded throughout the 1980s, during the war. The oil industry is run by the Angolan state oil firm Sonangol, in conjunction with foreign oil companies. Angola is the second-largest producer of oil in sub-Saharan Africa and provides 7 percent of all U.S. oil imports. The United States is the main purchaser of Angolan oil, buying some 70-80 percent of all oil exports.

New oil reserves are being discovered regularly, and faster than the country's reserves can be depleted. Foreign companies have not been deterred from investing in Angola's oil industry irrespective of the warfare. The oil industry is viewed as an attractive investment opportunity that offers the oil companies favorable geological conditions, low operating costs, and co-operation from the Angolan government. The total foreign investment in oil production in the 1980-86 period was US$2.7 billion. The investment level in the next 3 years was US$2 billion, with US$4 billion invested between 1993 and 1997.

Hydroelectric power has been a priority of the Angolan government. In 2000 75.03 percent of the electricity produced was hydro-generated. Several large rivers flow through the country and give an enormous potential for hydroelectricity. The current generating capacity exceeds demand locally and output is increasing. This makes Angola a potential regional exporter of hydroelectric energy. However the power supply has been irregular, partially due to sabotage by the warring factions, and a deteriorating infrastructure due to poor maintenance and lack of investment. However, the potential for regional export is vast when stability returns, even though Angola exported no electricity as of 1998.

Angola had about 4,000 manufacturing enterprises before the civil war, which employed 200,000 people. However, this was significantly reduced by the onset of the war. The only products that are manufactured and exported from Angola today are cement and refined petroleum products. There is potential for establishing the pre-war levels of production, but this will require stability and outside investment. It would also necessitate the creation of an infrastructure. Hence, investment in oil and diamonds will for a long time be more interesting to outside investors than Angola's manufacturing sector.

Angola has no territories or colonies.

HOW MUCH ARE COMLEMENTARY HEALTH PROJECTS APPRECIATED IN ANGOLA