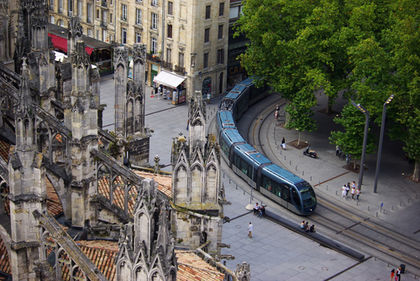 France enjoys one of the most sophisticated infrastructures in the world, developed through the govern-ment's heavy investment in the field and made possible by advanced technology. A network of various modes of transportation blankets the whole country, including air, land, and rail transportation. Transportation is also possible via rivers. The technologically advanced rail system— utilizing some of the fastest trains in the world—is operated by the French National Railways (SNCF), a state-owned company. There are a total of 31,939 kilometers (19,846 miles) of rail lines in the country. There are approximately 828,000 kilometers (514,605 miles) of roads in France, all of which are paved. About 47 per cent of the waterways are heavily used. There are a total of 474 airports in France, many of which serve international traffic. The major airline is Air France, which provides service to all corners of the globe. Many of the ports and harbors are equipped to handle the needs of freight as well as passenger ships. The major port cities are Dunkirk, Bordeaux, Marseille, Nantes, Rouen, Le Havre, Boulogne, Cherbourg, Dijon, La Pallice, Lyon, Mullhouse, Paris, Saint Nazaire, Saint Malo, and Strasbourg.

The communications infrastructure of France also ranks high among advanced countries. There were about 35 million main telephone lines in use by the end of 1998, with mobile cellular phone usage at about 35 percent of that figure. About 218 newspapers were sold in France per 1,000 people in 1996. This number slightly exceeds EMU member countries' newspaper circulation rate for the same period but falls behind the high income countries' average of 286. The number of radios per 1,000 people in 1997 was 937, which shows the same pattern with respect to the EU and high income countries' averages. Radios broadcasting in AM, FM, and short wave cater to domestic and international clienteles. Television set ownership is somewhere in the middle of EU countries. Cable TV is not as widespread in France as it is in either high-income or EU countries as a whole. France's ratio of 27.5 cable subscribers per 1,000 is a far cry from Europe's 110.3 and that of the wealthiest nations' 184. In spite of its vast mobile phone usage, France also lags behind both EU as a whole and its wealthiest countries. There are fewer Internet service providers (ISPs) in France

than in many other EU nations, but there is easy access to the Internet via both domestic and foreign ISPs. The dominant domestic telecommunications company, Mini-tel, is run by the government-owned France Telecom, which has a proprietary electronic commerce service. Even though it lags behind its counterparts in the developed world in some electronic communications industries such as the Internet, France is quickly catching up.

Nevertheless, France is a very conservative country, deeply committed to its own distinct national information infrastructure, which makes the country cautious in approaching innovations that do not originate within France. The government makes special efforts to prevent English, which is by far the most widely used language on the Internet, from taking over in communications. A law was even passed in the early 1990s in an attempt to bolster the use of French in the communications field, thanks to efforts of the Ministry of Culture. The French Internet industry and other communications sectors are more heavily regulated than those of Germany and Britain, and some economists maintain that this has significantly impeded developments in the Internet and related industries in the country. On the other hand, government is promoting the usage of information technology and began in 1999 to deregulate some aspects of the industry.

France is not rich when it comes to fuel resources, so it imports three-quarters of the fuel it needs, especially oil. The same does not hold true for electrical energy production, though. Electricity production reached over 480 billion kilowatt hours (kWh) in 1998. The biggest source of electrical power is nuclear energy, which supplies about 76 percent of the country's needs and making France the second largest supplier of nuclear energy after the United States. The next largest source of electrical power is hydroelectric, which supplies about 13 percent, which is produced by plants operating on the Isére, Durance, Rhine, Rhône, and Dordogne rivers. Additionally, a tidal power plant is located on the Rance River in Brittany. Fossil fuel represents about 11 percent of electrical power in France and supplies about 389 billion kWh of energy. France exports about 62 billion kWh of fossil fuel energy and imports 4 billion kWh more.

how does infrastructure development increases number of tourist in france?