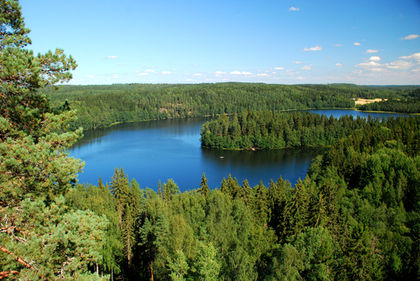 Located between Sweden and Russia, Finland also borders the Baltic Sea, Gulf of Bothnia, and Gulf of Finland. Finland's area, at 337,030 square kilometers (130,127 square miles), is slightly smaller than the state of Montana. Finland shares a long border of 1,313 kilometers (816 miles) with Russia, 729 kilometers (453 miles) of border with Norway, and 586 kilometers (364 miles) of border with Sweden. The remaining 1,126 kilometers (700 miles) of its boundary is coastline, excluding islands and coastal indentations. The capital, Helsinki, is the north-ernmost national capital in Europe, but it is found in the south of Finland, as are the majority of its 94 towns. Finland also includes the island province of Åland, located between Sweden and Finland. The islands are locally autonomous, have their own government, and are entirely Swedish-speaking.

The population of Finland was estimated in July of 2000 as 5,167,486. The population growth rate is a very small 0.17 percent and generally has been small. Finland has a high proportion of elderly: only 18 percent of the population are under 14 years of age and 15 percent are over 65.

Finland is extremely homogenous. Ethnic Finns make up 93 percent of the population, ethnic Swedes 6 percent, and the rest is mainly made up of the Sami (also called Lapps), Roma, and Tatar. There are 2 official languages: Finnish (spoken by 93 percent of the population) and Swedish (by 6 percent). Due to the harsh climate in the north, population is concentrated in the lowlands in the south of Finland. Approximately 81.2 percent of Finns live in urban areas with around 1 million concentrated in the capital, Helsinki, and its metropolitan area.

Formerly a source of emigrants (people moving outwards from a country), Finland is currently becoming a destination for immigrants (people who move into a foreign country). In 1996, the number of foreigners living in Finland was 74,000, with Russians accounting for about 20 percent, followed by inhabitants with Estonian, Swedish, and Somali former citizenship.

Metals and engineering now constitute the largest sector of Finnish industry, with motor vehicles and machinery driving much of the growth of the late 1990s. In 1999, mechanical engineering and metals manufacturing industries employed 187,175 people, and total revenues reached around FMk123 billion.

Finland holds a leading international position in the building of icebreakers, luxury liners, and other specialized ships. The are only 2 main ship building companies, Masa Yards and its rival, Finnyards, both dominated by Norwegian companies. Masa Yards was bought by the Norwegian firm Kvaerner in 1991 and Aker Maritime, another Norwegian firm, bought 60 percent of the shares in Finnyards in 1997. Both companies have specialized in niche markets in shipbuilding, which has helped them survive in an over-saturated global market. Finland's strong pollution control and other environmental laws, plus neighboring countries' environmental concerns and support from TEKES and other research organizations, has led Finnish industry to specialize in environmental technology. Finland made US$1.45 million of environmental equipment in 2000, much of it used by Finland's own pulp and paper industry.

Finland's abundance of forestry products is the historical heart of the Finnish export industry, accounting for almost 30 percent of total exports—although only 2.4 percent of the GDP—in 2001. There was record growth in nearly every aspect of forest industry in 2000. Total forest production increased by nearly 5 percent. Plywood production rose the fastest—over 8 percent compared with the previous years, with total production of about 1.2 million cubic meters. Sawnwood production rose by nearly 5 percent in 2000 to 13.3 million cubic meters. Paper and paper-board production reached 13.5 million tons, 4.3 percent higher than in 1999. Turnover in the forest industry in 2001 was worth FMk100 billion. In 1998, forest industries employed 95,886 people. Stora-Enso, the largest group in this sector, is the second largest producer of newsprint products in the world and had revenue of over FMk75 billion in 2000.

The electronics and electro-technical equipment industry employed 63,700 people and had revenues of FMk114.6 billion in 1997, while high-tech products accounted for almost 26 percent of total export value by 1999. The majority of growth in this industry can be attributed to the mobile-phone manufacturer Nokia. Nokia originated as a pulp and paper concern but began investing its profits in high-tech research in the early 1980s and is now one of the leading mobile phone manufacturers in the world. Nokia is an example of Finnish industry's emphasis on R&D; it spent almost 9 percent of its turnover on R&D in 1999. Nokia, however, is the only high-tech company in Finland with a significant market share, unlike Sweden, which has a range of companies in competition. This means that growth in this industry is dependent on Nokia's fate, a risky situation.

The third largest industry in Finland, the chemicals industry, had a value of FMk56 billion in 1999, which was over one-tenth of the total value in Finnish manufacturing. The chemicals industry focuses on a number of core areas, including chemicals for the forest industry, agribusiness, and other industries, as well as paints, plastic products, environmental products, petro-chemicals and oil products, and most recently biotechnical products. Finland's strong environmental consciousness has fuelled not only innovation in chemicals to help the environment—Finland was the world's top producer of water treatment chemicals in 2000—but also environmentally conscious business practices. In 1992 Finland joined a voluntary international program called Responsible Care, which is an environment, health, and safety initiative operating in 45 countries. Although only 12 percent of chemical firms have signed on, some of Finland's largest producers are members, meaning that over 80 percent of chemical production is covered by the initiative. Members commit themselves to continuous improvement in performance regarding environment protection, health, and safety and to open communication about activities and achievements on these issues. Some effects can be seen in the 60 percent drop in employee accident rates over the past 10 years, while emissions also fell significantly in 2000.

The recent growth of the electronics industry has spurred the production of plastic components and packaging for electronic equipment. In 1999, the chemical industry in total employed almost 39,000 people, or 9 percent of the total industrial workforce.

The Finnish food industry is a good example of how Finnish industry might grow throughout the 21st century. Finland has begun expansion into the niche market of "functional foods," researching and developing naturally-derived food additives which are deemed to have health benefits. One of the more well-known is xylitol, a sweetener derived from the birch wood chips of Finland's forests that has been shown to prevent tooth decay. Xylitol can be found in many chewing gums and as a sweetener in some medicines. The Finnish company Xyrofin is the market leader in producing xylitol; its predecessor Suomen Sokeri patented the industrial manufacturing method for xylitol in 1972. The more traditional sectors of the food and drink industry are also based on processing and refining raw materials and, in 1998, employed 40,700 people to produce a total output worth FMk49.3 billion. Meat processing accounts for over one-fifth of the total value-added sector, followed by beverages and dairy products. Russia, despite its economic troubles, is still a primary destination for food and drink exports. In 1997 Finnish food and drink industries sold Russia around 336 million euro worth of goods.

Sales volumes in trade and commerce increased 5 percent in 1997, especially the purchase of vehicles, construction materials, and household appliances. Retail , wholesale, hotels, and restaurants accounted for a little over 12 percent of the GDP in 1998. The sales industry is very concentrated, with huge supermarkets accounting for over half of all retail outlets for everyday goods. Approximately 217,000 people were employed in retail and wholesale trade in 1998. The major Finnish wholesalers and importers are Kesko Oy, SOK-chain, and Stockmann Oy. Each company also has its own retail operation, each including several department stores and separate chain stores. Kesko, a wholesale and supermarket chain, had a turnover of FMk35.6 billion in 1998, which was 8 percent of total revenues (FMk440 billion).

Transportation and communications accounted for 10.2 percent of GDP in 1998. The increase of exports and industrial production in the second half of the 1990s raised demand in land, rail, and water transport and output grew by 8 percent in 1997. Road transport dominates domestically as 93 percent of passenger traffic and 67 percent of goods transport take place on the dense network of Finnish roads. The railway sector is currently state-owned, although discussions are underway to allow other companies to use the rails for moving freight. There are currently no plans to privatize the Finnish railway company, which provides long-distance passenger transport. Shipping is important for Finland's international trade; in 1998 total shipping (imports and exports) between Finland and other countries totaled 76.59 million tons. Of that, two-thirds were shipped to other EU countries, 18 percent to Germany, and 16.4 percent to Sweden. Domestic shipping totaled 12.88 million tons, up from 11.85 million tons in 1997. Due to Finland's extremely cold winters, Finnish shipbuilding and shipping is dependent on the building and use of icebreakers. Total employment in the transport sector was 154,000 and total turnover in the same year was FMk440 billion.

Telecommunications contributed only a little over 2 percent to the GDP in 1997; however, it is the existence of a large, inexpensive, extremely sophisticated and efficient network that has enabled almost every other industry to grow. The telecommunications sector was fully opened to competition in 1995, and the government passed a series of laws to increase the flexibility of telecommunications operators sharing and trading access to infrastructure. The government also eliminated the need for operators constructing a fixed telephone network to purchase a license, although licenses are still required for mobile phone networks. High competition in this sector has kept tariffs among the lowest in Europe. Data processing services are in great demand owing not only to the Internet but also to the turn of the millennium and the adoption of the euro. The state-owned Sonera Corporation (previously Telecom Finland) and the 45 privately owned local telephone companies operating under the Finnet Group cover the majority of the telecommunications market.

Although accounting for only 3.5 percent of the GDP in 1998, financial services have been the source of fastest growth in the private services sector. Banks and other services have been recovering steadily since the recession of 1990 to 1993, and by 1998 net operating profits in the financial sector were FMk7.6 billion. Approximately 42,000 people were employed in the banking sector in 1999. A recent development, spurred by the advances in connectivity and other computer technology, is the rapid increase in Internet banking, which rose to around 1.5 million users in 1998. Merita Nordbanken was formed from the merger of the local Merita and the Swedish Nordbanken banks Together with the cooperative Okobank group and the state-owned Leonia. These 3 largest banking groups account for 87 percent of all domestic lending and 85.8 percent of deposits.

Finland has no territories or colonies.

Thank you guys so much! I'm doing a huge project on Finland and this information really helps. Thanks again, Sami
2
Riley Jane

Thanks for all the information! I do, howeber, need to know where to find the year's compulsory, literacy rate, students primary and secondary schools, pupil/teacher ratio, and number of Universities. I have this huge project and this is ALL I'm missing. Thanks for the help!!!
Riley
3
NAIDA

THANX FOR DA INFO ABOUT FINLAND I HAVE A PROJECT.AND THIS HELPS
4
Platypus

thanks doing a country profile project on Finland do you happen to know the agricultural density of Finland?