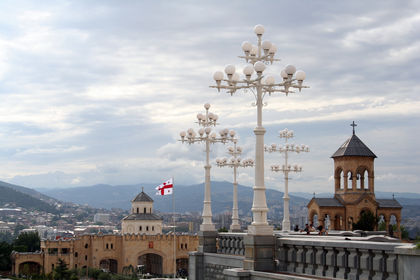 Georgia is located between Europe and Asia. East of the Black Sea, Georgia is separated from Russia by the Caucasus Mountains. It borders Turkey and Armenia to the south and Azerbaijan to the east. Georgia has a land area of 69,700 square kilometers (26,911 square miles) making it slightly smaller in size than the state of South Carolina. Approximately 75 percent of Georgia's territory is 500 or more meters above sea level. The country has a coastline of 315 kilometers (196 miles).

Georgia is an ethnically diverse state. Georgians comprise only 70 percent of the population, while there are minorities of Armenians (8 percent), Azeris (6 percent), Russians (6 percent), Ossetians (3 percent), and Abkhazians (1.8 percent). These groups, while small in number, have posed problems for the T'bilisi government as they are concentrated in specific areas and some have aspirations towards independence. Georgia contains 3 autonomous republics: Abkhazia, Adjara, and South Ossetia.

Georgia used to possess one of the world's richest manganese deposits in the Tchiatura and Sachkhere regions: present-day resources are estimated at about 200 million metric tons. Significant deposits of high quality mineral and drinking water exist in Georgia. Two-thirds of estimated resources (amounting to 17-18 cubic kilometers/4-4.3 cubic miles) are located in western Georgia at 10 to 15 meters depth while the remaining third in eastern Georgia is also accessible at a depth of 250 to 300 meters. A thriving industry during the Soviet period, bottled water production declined sharply after independence and by 1993 was down to 5 percent of pre-independence levels. In recent years, however, the mineral water industry has revived with the "Borjormi" label leading the way.

Georgia's manufacturing base is so weak that many of its most important enterprises can only operate without paying for electricity. The government, afraid of the potential redundancies, has refused to take decisive action. The metallurgy and chemical sectors are commodities of most importance to the Georgian economy, specifically manganese ore, ferromanganese, mineral fertilizers, and synthetic ammonia.

Georgia was once the tourism center of the Soviet Union with 3 million visitors annually, 250,000 of whom came from outside of the USSR. As Georgia descended into civil war in the early 1990s, its tourism industry ground to a halt. According to Georgia's State Department of Tourism and Resorts, about 383,000 people visited Georgia in 1999, of which 219,000 came from the CIS and 164,000 from other countries. Many of the hotels and health resorts that had catered to tourists were used to house the thousands of internally displaced people who fled to the capital after the defeat of Georgian forces in Abkhazia. Tourism is also hindered by a cumbersome visa regime that requires letters of invitation and submission of passports to embassies prior to departure. Visas can be obtained upon arrival at the airport but only at very high prices.

The attractions for travelers in Georgia include the beautiful coastal regions along the Black Sea, though the 2 autonomous republics of Abkhazia and Adjara dominate most of the coastline. With its large mountain ranges (the highest peak is 5,150 meters/16,897 feet), Georgia is ideal for skiing, and the Bakuriani and Gudauri ski resorts were very popular among Russian tourists in the Soviet era. Revival of this tourist attraction will, however, require heavy investment and continued political stability. Though tourism could become one of the country's leading industries, hotels and restaurants contributed only 2.2 percent of GDP in 2000.

The textile industry is also one that should witness significant development in the coming years. A legislative framework for investment and close proximity to EU markets complements the availability of raw materials and a cheap skilled workforce. Eighty-five percent of textile companies have been privatized, either as joint stock companies or companies with limited liability.

The legacy of communism and the reality of corruption ensured that the creation of a strong banking system in Georgia would be troubled. The absence of an effective banking sector made it difficult for entrepreneurs to get the capital needed to invest in private enterprises, while government interference forced banks to give loans to dubious projects and individuals, further debilitating the development of financial services. Hundreds of banks were established in the early 1990s with capital of US$500 or less. Between 1998 and 2000 the number of banks fell from 294 to 33 and more closures are expected as a result of bankruptcy, closure, or merger.

Georgia has no territories or colonies.

i have a question what are the 5 main tourist attractions of georgia?
2
paramjeet

want to see georgia, pls guide me for travel to georgia.
3
lovely

is this information lately uploaded? and if its not people need to upgrade it more often.