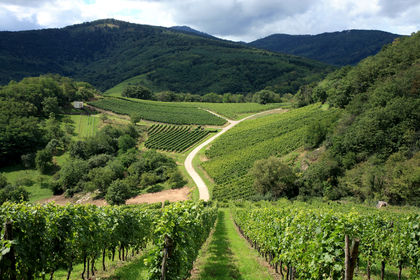 France has been one of the most dominant agricultural centers of Europe for centuries. That gave France an important role in European and, to some extent world, affairs in the pre-industrial age. Currently, France still leads Europe in agriculture, excluding the Russian Federation. With about 730,000 farms, approximately 7 percent of the workforce is employed in agriculture or similar sectors such as fishing or forestry. When all people engaged in agriculture-related activities (including the processing of agricultural goods, for example) are considered, the percentage of the population engaged in agricultural production is much larger. As of 2001, many younger people tend to look for employment outside of family farms and help out only as part-timers. This trend, however, has generated an opportunity for others looking for jobs in agriculture. According to the French Ministry of Agriculture, the share of population actively involved in farming is decreasing. Nevertheless, new creative methods of marketing and agritourism have attracted some young talent to the sector. The sheer size of the land used for farming, about three-fifths of the total, indicates the place of agriculture in the lives of French people. In the post-World War II era, government has made a significant effort to modernize French agricultural production by switching to more scientific methods and modern equipment. In 1997, about 86 percent of farms owned at least 1 tractor, and farmers increasingly upgrade equipment. The size of irrigated land in 1997 is twice that in 1979.

The major agricultural products that place France among the top producers in the world market are sugar beets, wine, milk, beef and veal, cereals, and oilseeds. Producing 29 million metric tons of sugar beets, France leads the EU. It takes second place in both the EU and the world in the production of its highly popular wine varieties, with 5.3 million metric tons. Though fifth in the world, France ranks second in the EU in milk production, totaling 23.3 million metric tons. France is the major source of meat and veal in the EU with 1,815,000 metric tons. What is commonly known as "Mad Cow Disease" (an illness first discovered in British beef that causes death if it infects humans) created a rift among European countries, especially when France prohibited British beef from entering the country. In the cereals category, which includes soft wheat and grain maze, France leads the EU. With 4.1 million metric tons of production, France also holds the leading position in oilseeds in the EU.

The biggest export items among agricultural products are various types of beverages and alcoholic drinks. According to the Ministry's numbers, the value of alcoholic exports reached 56.6 billion francs in 1999. This amount registered a 6 percent increase over the previous period. Cereals and flour exports, which increased 12 percent, totaled 36 billion francs. Meat and other animal products experienced a shrinkage of 7 percent but were still valued at 28 billion francs. All categories of prepared food brought 27 billion francs into the country in the same year. However, this reflected a decline of 10 percent from the previous year. Dairy products also suffered a loss of 2 percent in the world market share, generating 24 billion francs. Demand for French sugar and sugar refineries declined sharply in the world market by about 8 per cent in 1999. The total export revenue obtained by this category was 11 billion francs. The economic crises in world markets played a role in the declines experienced by French exporters of agricultural products. The EU and the United States are France's principal customers for agricultural products.

France is also an importer of agricultural commodities. Prepared food tops the list of imported agricultural items. Figures from 1999 indicate that France imported 19 billion francs worth of meat and other animal products. Even though it has a sizable coastline, France imports a large segment of its fish demand from abroad, which was valued at 16 billion francs in 1999. Fruits, dairy products, and various beverages cost France 14, 12 and 10 billion francs respectively in the same year. All import categories experienced moderate shrinkage between 3 and 6 per cent, except meat, animal products, and fish-eries, all of which remained unchanged from 1997. France did most of its shopping from the same countries to which it sold its products.

Almost half of farm income in France is generated by livestock raising, and the other half is contributed by crops. Cattle are raised mainly in the north and west; sheep and goats primarily in the south and east, which is drier and more mountainous. Pigs and chickens are raised everywhere in France. The Paris Basin area is the source of wheat while some rice comes from irrigated fields of the Rhone delta. While Burgundy, Champagne, Bordeaux, and Alsace are well-known wine regions, wine is actually produced all over the country.

Fishing does not contribute to the French economy in comparison with the agriculture on the national scale. According to the data released by the Ministry of Agriculture, fish production in 1998 reached nearly 600,000 metric tons, a slight increase of 1.5 percent over the previous year. Because of favorable prices, though, the fish products sector exceeded 6.5 billion francs. The exports of the sector fall far behind imports, creating a trade deficit in fisheries which is more than double the exports. However, France still ranks twentieth in the world in total fish production. Locally, fishing plays an important role in such areas as Normandy and Brittany, the Southern Atlantic coast, and the Mediterranean. Concarneau, Boulogne-sur-Mer, Lorient, and La Rochelle are the main fishing ports of France.

France's forests are prized for both economic and ecological reasons. The National Forestry Service, founded in 1966, is responsible for managing the country's forests. From 1850 to 1900 a big reforestation campaign occurred, and as of 2001, about 27 percent of French land is covered by forests, making it the third-most forested country in the EU. Two-thirds of the forests are occupied by deciduous trees, and the rest are conifers. France's forests have grown 35 percent since 1945 and continue to grow by about 30,000 hectares each year. Close to 4 million people in France have private ownership of wooded areas. The marketed wood harvest was up in 1998 from its level in 1997 by about 1.6 percent. The rise in the wood industry is attributed to the renewal of activity in construction. As in many other countries, forests in France are utilized not only for wood production but as recreation as well. Hence, while supplying wood products and playing a role in a healthier environment, forests also contribute to the national economy by serving the tourism sector.

hello;) I would like to know whats the major agriculture cron in France?
2
immaqueen

the notes are good but i need the factors and problems.
3
Susy Cawthorn

I would like to know if there was a dairy farm in France owned by a family with the last name of "Coulte". That would be my great-grandmother's parents. I so want to find more about her. I knew her but nev er sat & asked a million questions.
4
tbaby

what does France lead the world in? You know, what products?
6
tassadduq

can someone give information about agriculture universities in france and there location ,. i have to get admission
7
monaj

I would like to know which company is the famous Agri-Product Company in France, Thanks!
9
Rajendra Darai

I am very much intrested to work in the France in the field of agriculture.So i want to get a detail information to get work permit in your country.
10
samantha

This is a good site it really helped me with my assigment thank you to who ever mad this site :)
11
sally

this site is amazing. i have learnt alot THANKYOU!
12
sally

this site is amazing. i have learnt alot THANKYOU!
13
jason symons

American living in Chailly-en-Biere (55 km se of Paris). Would like to know, by season or time of year, what vegetables and fruits are grown. I wonder what the yellow tipped plants are that are all over the area and soon to be harvested. Just would like specifics since I live here.

Thanks helped a little but I need what crops are harvested in what seasons!!
18
Marisol

This was so helpful with my History report on France. Thank you so much!
19
maria

I NEED THE AGRICULTURAL INDUSTRIES AND TECHNIQUES
so i request you to add the industries so i can pass my wall magazine comp. which helds in our school
21
marcus

Why are products from other countries sold at the markets in France?
22
cherry

hi,im canadian-tunisian-living in dubai-studying in a british school.i would like to know do france have more of mixed farms than other types.???
p.s: this helped me with my humanities hw ,...thx
24
Milana

Hello everyone, i'm kyrgyz girl, and i'm going to go to France, and I want to know the french industries, this state is very helped to me, THANK)
25
Meyta

Hi everyone, I'm struggling to identify the top French producers of wheat. Any information will be much appreciated.
26
harwant singh

LOVE this website. so much info, i m so acing my assignment
28
YASH

Is there any body, who tell me list of agrochemical companies in France ?
30
kishore k

Just want to thank whoever wrote this, it helped me out a lot in my project.
32
Vivboo

Awesome website, create more of these. It helped me with my project a lot.

Thank you so much! It helped a lot with my geography project! Please make more of these!
:D
34
Mariola

These notes that have been given is correct as we have written in the scratch part but we want to know about the art the living of France.
Hope you understand..
Merci
36
Flitzerous

This was actually good this stuff helped me on my project!
37
Kennedy

Which state, region or city of France is likely to employ migrant in farming. I need to know so i can go in search for farming job. Thank you.
38
Steven Brian

Would like to know, by season or time of year, what vegetables and fruits are grown in France
39
McLain

Iâ€™m doing a project in which I need to know the geography of France and just want to know if the land in France is fertile or not i read the page and didnâ€™t find anything about it so can someone plz find the paragraph number if there is one that would help me thnx
40
Jimmie N. Barnes

Can you tell me any details about a decision made by France around 2000-2002 ± relating to a refusal to accept either Agricultural product or GMO from the USA or USA based company (Probably Monsanto)?
I was in France at the time and it was very prominent in the news but back in the USA - nothing. (big surprise eh?)