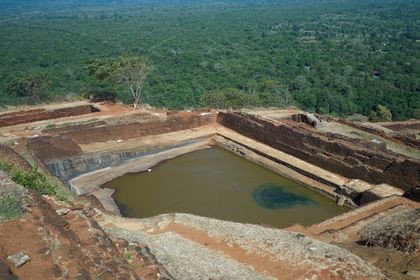 Sri Lanka is an island nation-state in the Indian Ocean. It is located 880 kilometers (547 miles) north of the equator, off the southern tip of India, and has a maximum length of 432 kilometers (268 miles) and a maximum width of 224 kilometers (139 miles). The island has an area of 65,610 square kilometers (25,332 square miles) and a total coastline of 1,700 kilometers (1,056 miles). Sri Lanka is slightly larger than West Virginia. Its capital, Colombo, lies on the country's western coast.

Sri Lanka's population was estimated at 19.24 million in 2000, indicating growth of 11.5 percent compared with the 1991 population of 17.25 million. Sri Lanka has the slowest-growing population in southern Asia—estimated at 0.9 percent yearly—and its population is projected to increase to 23.55 million by the year 2025. The density of Sri Lanka's population is fairly high, at 280 persons per square kilometer (725 per square mile). In 2000 the birth rate was estimated at 16.8 per 1,000 people and the death rate at 6.4 per 1,000 people. The majority of Sri Lanka's people live in the rural sector (67 percent), in urban areas (22 percent), and on plantation estates (11 percent). The infant mortality rate (16.5 per 1,000) and overall death rate are low for a developing country, and the average life expectancy (69 years for men and 73 years for women) is the highest in southern Asia. The low fertility rate and high life expectancy has led to a larger increase in the older population than the younger population. It took most western countries 45 to 135 years for their elderly population to double, while in Sri Lanka this process is expected to take only 2 decades. Sri Lanka is expected to have the third oldest population in Asia in 2025. The rising burden of maintaining an aged population could exert considerable restraints on the government's fiscal resources, and the need to provide retirement support income and health care will have serious consequences on the economy as a whole during the next 2 decades.

An important characteristic of the Sri Lankan population is its ethnic and cultural diversity. Approximately 74 percent of the population are Sinhalese, 12.6 percent are Sri Lankan Tamils, 5.5 percent Indian Tamils, 5 percent Muslims, and the remainder consists of Burghers, Malays, and others (2.9 percent). Among the ethnic groups, the Sinhalese were the earliest inhabitants of Sri Lanka and are descendants of the first colonists who occupied the island during the 5th century B.C. Most of them are Buddhist, and speak a language called Sinhala, derived from several Indo-Aryan languages. The Sri Lankan Tamils are the descendants of the early Dravidian invaders from southern India. They are predominantly Hindu and speak Tamil, one of the major Dravidian languages of southern India. Indian Tamils are the descendants of laborers brought by the British planters in the 19th century to work on plantations. The Muslims are the descendants of early Arab traders who settled in SriLanka

The major source of government revenue in Sri Lanka is taxes (86 percent). However, unlike the United States, the contribution of income taxes to government revenue is negligible, at 13 percent, while indirect taxes dominate government revenue. There are 3 major sources of indirect taxes: the goods and services tax (GST), excise tax , and the national security levy (NSL). The GST is a recent addition to the tax system (introduced in April 1998), replacing the business turnover tax. The GST is levied on a value-added basis at a uniform rate of 12.5 percent with full credit given to all inputs. GST revenue accounted for 26 percent of the total tax revenues in 2000. An excise tax, which contributed 23 percent of the total tax revenue during the same period, is levied mainly on liquor, tobacco, petroleum, and motor vehicles. The third important source of government revenue, the NSL, was initially introduced as an interim measure to finance the rising cost of war in the north and the east. It has become an important contributor to national tax revenue, contributing 17.5 percent. The NSL is levied at a rate of 6.5 percent. Taxes on international trade account for 16 percent of the total tax revenue. With the liberalization of trade and restructuring of the tariff regime, which began in the late 1980s, revenue from taxes on foreign trade has been declining.

The personal income tax (PIT) rate in Sri Lanka has 4 brackets, ranging from 10 percent to 35 percent. The PIT's contribution to the government tax revenue is small (about 1 percent of gross domestic product) and is lower than most other countries. The economy's high dependence on subsistence agriculture, low levels of income and tax compliance, and inefficient tax administration are the key contributors to low levels of PIT revenue. The corporate income tax (CIT) in Sri Lanka of 35 percent (flat rate) is relatively modest and is similar to the rates in other Asian economies. However, the CIT tax yield in Sri Lanka is quite low, as many firms are offered tax incentives to encourage investment.

Manufacturing accounts for 16 percent of the gross domestic product and employs nearly 400,000 people. The textile industry is the largest of Sri Lanka's industries, contributing 63 percent to industrial sector growth (1999). Other major manufacturing industries include processed diamonds, food and beverages, light engineering, chemicals, petroleum, rubber and plastics, and machinery and equipment. The manufacturing sector that evolved under the import substitution development strategy in the 1960s to cater mainly to the domestic market has transformed into a sector catering to the foreign market. Much of the industrial output is exported and it is the single major export earner in the economy (in 1999, industrial exports accounted for 54 percent of total export earnings). This remarkable achievement is attributable to the policy reforms introduced during the post-1977 period. Under the reforms, the private sector was encouraged to participate in export-oriented industries through various incentives, and several free zones were established. This resulted in a significant inflow of foreign investment; the private sector emerged as the major contributor to industrial output. Overall, market-oriented policy reforms introduced during the post-1977 period have led to far-reaching changes in the structure and performance of the manufacturing sector.

Mining is a minor economic activity contributing about 2 percent of the gross domestic product (1999). The country's mineral extraction industries include the mining of gemstones and graphite; excavation of beach sands containing ilmenite and monazite; and quarrying quartz sand, clay, and salt. Gem mining is traditionally the most important activity, producing high value gem-stones such as sapphire, ruby, and topaz, and a variety of semiprecious stones, most of which are exported. Sri Lanka leads the world in high-grade graphite mining.

Wholesale and retail trade, the largest sub-category in the service sector, accounts for about 21 percent of the gross domestic product (1999) and employs about 22 percent of the workforce (2000). With the lifting of import controls and the government monopoly in the importation and distribution of essential consumer goods during the post-1977 period, the trade sector expanded rapidly. Domestic trade accounts for half the value of the trade sector. Increased participation by foreign firms in domestic trade in Sri Lanka is a relatively recent phenomenon, with international food franchises such as McDonald's and Pizza Hut in operation. Numerous small outlets including street stalls serve the retail trade, and in the major cities there are large shopping centers and supermarkets.

Banking, insurance, and real estate accounted for 8 percent of gross domestic product in 2000. This sector expanded rapidly following the 1977 policy reforms that dismantled the virtual government monopoly in the insurance industry and lifted the restrictions in the banking industry. The increased incentives for the private sector led to the emergence of several new insurance companies and banks. A total of 6 new local banks were established and 11 foreign banks opened branches. The banking system consists of 11 local and 16 foreign banks. Two development finance institutions and several merchant and investment banks are also active participants in the financial markets in Sri Lanka. In addition, 22 financial institutions providing credit facilities are in operation. The Sri Lankan financial system comes under the regulation of the Central Bank of Sri Lanka, which is the monetary authority of the country.

Tourism is an important activity with potential for growth. The country known as the paradise in the Indian Ocean offers a diversity of environments and tourist attractions, from tropical beaches and arid lands to lush forests, tea plantations, and a rich archaeological heritage. Promotion of tourism in Sri Lanka began in the late 1960s with the establishment of the Ceylon Tourist Board. Between 1976 and 1982, the number of tourist arrivals grew rapidly at an annual average rate of almost 24 percent, reaching a peak of 407,230 before declining to 337,342 in 1983 as a result of the civil unrest in the country. As the political violence in the country intensified, international tourist arrivals continued to fluctuate with a general trend of decline. Tourist arrivals increased to 436,440 in 1999. Tourism generates US$275 million in foreign exchange annually and employs approximately 87,600 workers. The majority of tourists to Sri Lanka come from Western Europe (65 percent), Asia (26 percent), and North America (5 percent).

Sri Lanka has no territories or colonies.

Dear all, I was wondering who's the writer(s) of this content, because I've have to mention them for my report. Thanks in advance for your earliest reply.
3
chandrasiri

is the width of SriLanka measured from batticloa to Colombo?