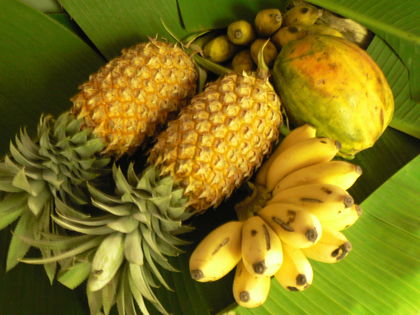 Sri Lanka is a developing economy based largely on agriculture, services, and light industry. Agriculture accounts for approximately 21 percent of the gross domestic product (GDP) and employs 38 percent of the workforce. Agricultural output is divided between cash crops from plantation agriculture and food crops from subsistence agriculture. Cash crops—namely tea, rubber, and coconuts—are largely grown on plantations. Rice is the principal food crop and the main livelihood for over 70 percent of Sri Lanka's rural population. Manufacturing industries account for approximately 19 percent of the gross domestic product and employ about 17 percent of the workforce. Chief manufactures include textiles, ceramics, petroleum products, vegetable oils, fertilizers, and cement. The service sector is the largest of the Sri Lanka economy, employing 45 percent of the workforce and contributing roughly 60 percent of GDP. Tourism, banking, finance, and retail trade are the major components of the service sector.

The country is endowed with many natural resources. It has an equatorial climate with a high average rainfall. The land is fertile and suitable for growing a variety of crops, and one-third of the land is arable. Rivers cascading from the central hill country provide energy to generate hydropower, the major source of electricity in Sri Lanka. The country also has rich fishing resources. Sri Lanka's mineral resources include titanium ore, graphite, kaolin, and gemstones. It also has large deposits of unexploited iron ore.

Foreign trade is an important segment of the Sri Lankan economy. Major imports include petroleum, consumables, machinery and capital equipment, motor vehicles, and various manufactured goods. Major exports include garments, tea, rubber, coconut products, foodstuffs, gems, and jewelry. Sri Lanka is the largest exporter of black tea in the world and the third largest producer of natural rubber. A variety of gemstones, for which Sri Lanka is world famous, are also exported. Significant quantities of high-grade graphite, for which Sri Lanka is a world leader, are also exported. The industrialized countries taken together as a group accounted for 75 percent of Sri Lanka's total exports in 1999 and the United States is the largest single buyer of Sri Lanka's exports, with 39 percent in 1999. Other major export markets are the United Kingdom, Germany, Japan, Russia (tea), China (rubber), India, and the Middle East. In terms of imports, Japan is the single largest exporter to Sri Lanka. Motor vehicles, spare parts, and woven fabrics are the major items imported from Japan. India is the second largest exporter, followed by Singapore, South Korea, Taiwan, the United Kingdom, and the United States.

Sri Lanka is a mixed economy, in which both the private sector and the state sector engage in the production process. Foreign investments are encouraged and several free zones have been established. The country's banking system is well developed, so that both foreign and local banks function in the economy. Sri Lanka is committed to a free market ideology and has one of the most liberal foreign trade regimes in the world. This contrasts greatly to what the Sri Lankan economy looked like during the first 3 decades after the country gained independence from Great Britain in 1948. The economy that evolved in Sri Lanka under British rule was predominantly oriented towards agriculture, with plantation agriculture being the major contributor to the nation's growth. The 3 plantation crops—tea, rubber, and coconuts—accounted for 30 percent of the gross domestic product in 1948 and the bulk of the output was exported. Manufacturing was an insignificant activity in the economy. Banking and commerce were, for the most part, only used to support plantation agriculture. Nearly all foreign exchange earnings were derived from the plantations. The country depended on imports for nearly three-fourths of its food requirements and almost all of its manufactured goods.

The Sri Lankan economy has since become highly diversified; it has rapidly growing manufacturing and service sectors, agricultural activities have been modernized, and the country is nearly self-sufficient in rice production. The significance of the 3 major export crops (tea, rubber, and coconuts) as the main source of export earnings has fallen (from 90 percent in the 1950s to 16 percent in 1999) and the significance of manufacturing has risen (from 1 percent of exports in 1950 to 60 percent in 1999). These changes in the structure of the Sri Lankan economy are a result of varying economic policy measures adopted by the government since independence. Development strategies that shaped the Sri Lankan economy over the last 5 decades may be distinguished under 2 eras: the first era covering the period between 1948-76, and the second era during the post-1977 period.

During the first era, development policy focused on achieving the objectives of equity and economic growth. The instruments adopted to achieve economic growth were aimed at import substitution industrialization, both in manufacturing and foodstuffs. The key measures used to achieve this growth strategy were the imposition of various restrictions on imports, and the encouragement of domestic production. Extensive social welfare programs such as price subsidies on food, statutory price controls on consumer goods , and the provision of free education and health services were the instruments used to achieve greater equity. The welfare programs achieved significant improvements in the area of human development, including lower mortality rates, increased life expectancy, and high literacy rates. However, high welfare expenditures restrained the nation's capital growth and ability to invest, slowing economic growth and causing high unemployment and low wages. During the 1951-1976 period, per capita gross domestic product grew only at an average of 0.2 percent per year. The achievements of the import substitution policies were even less noticeable, except in the production of rice and subsidiary food crops. With a worsening trade balance crisis, most newly established industries operated well below capacity due to a shortage of imported goods. This, coupled with increased government participation in industrial development, hindered industrial growth and the ability to remain commercially viable. The continued government intervention in all spheres of economic life reached its climax at the end of the first policy era.

The second era of Sri Lankan economic development (post-1977) marked a shift towards a free market economy. The strategy aimed at liberalizing the economy from excessive government controls and it chose the private sector as the engine of growth. Policies were designed to accelerate economic growth by stimulating private investment through various incentives and also to increase the country's foreign earnings by promoting export-oriented economic activities. The liberalization policies, pursued under the watchful eye and participation of the International Monetary Fund and the World Bank, met with success at the beginning. Stimulated by enhanced levels of foreign aid and investment, the economy was successful, recording real growth rates of about 6 percent per year until 1986. During the following 5 years, however, there was a marked deceleration of growth caused mainly by the disruptive effects of the ethnic conflict on economic activities. Gross domestic product grew at an annual average of 2.7 percent between 1986-1989, and at an annual average of 5 percent between 1990-2000. During the second era, the level of income in the economy grew significantly with per capita gross domestic product more than doubling (from US$382 in 1975 to US$802 by 2000).

The transition to a free market economy based on a liberalized trade and exchange rate regime has brought benefits to the Sri Lankan economy. Unemployment, a problem for decades, has reduced significantly, and remains at historically low levels (8 percent in 2000). Nonetheless, the high levels of inflation , fueled by the sharp deterioration of the Sri Lankan currency, combined with the mounting cost of civil war has raised the cost of living to very high levels. The soaring cost of living has made many Sri Lankans struggle to satisfy their basic needs. Over 45 percent of the population depends on benefits under the income supplement programs initiated by the government. The balance of payments problem remains unresolved. The persistent trade deficit has led to increased reliance on foreign aid to meet the country's import requirements, leading to an inevitably mounting foreign debt . Foreign debt as a percentage of the gross domestic product, which accounted for 21 percent in 1975, grew to 75 percent in 1994, and amounted to 59 percent in 1999.

This article is way too long for my aquired tastes. I do not feel the need to read so much. You need to make this short and sweet and get to the point. Thank You.
3
Sara

i like the explicitness of this article. i could get an insight into the history of the sl economy, which is a part of my mgt course 'APPLIED INDUSTRIAL ECONOMICS'. thank u!
4
waruna chinthaka

This article was very useful for my studies and it is very informative, thank u for the contribution.
5
chamu

This article was really helpful to do my presentation on Economy of Sri Lanka for my Masters studies in political economy. thank you so much
7
Dinithi

Great article, enjoyed reading it.
It captures all relevant aspects. It would be better if the source of statistics are too quoted to give further credibility.
8
Saheli bagya

Very useful article for everyone.in my point of view there must add some information about enpowering of sri lankan econom .by the way thanks you to point out about those factors.
9
Nimesh Perera

Thank you very much with the article, it has very good stats
help me with course work