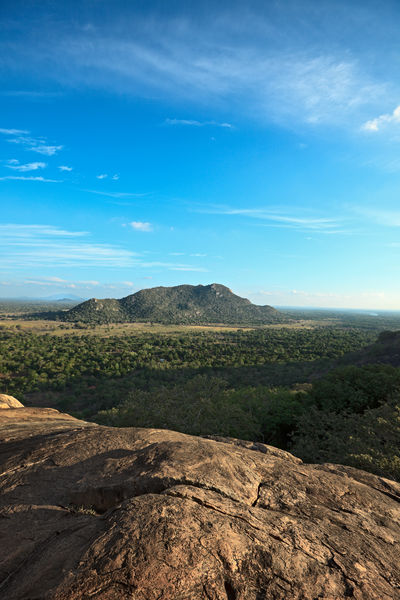 Agriculture is the most important sector of the Sri Lankan economy. Even though its contribution to the gross domestic product declined substantially during the past 3 decades (from 30 percent in 1970 to 21 percent in 2000), it is the most important source of employment for the majority of the Sri Lankan workforce. Approximately 38 percent of the total labor force was engaged in agriculture in 1999. In the subsistence sector, rice is the main crop and farming rice is the most important economic activity for the majority of the people living in rural areas. During the last 5 decades the rice sector grew rapidly and output more than tripled, reaching the highest ever output of 2.9 million metric tons in 1999. Increases in the area under cultivation, and improved productivity due to the modernization of agriculture are the main reasons for an increase in production. The rehabilitation of Sri Lanka's extensive ancient irrigation network and massive new investment in construction and maintenance of irrigation infrastructure led to a large increase in the area under rice cultivation. Between 1960-2000, the area used to grow rice increased 6 times to 546,249 hectares. The modernization of farming methods, such as the use of high-yielding seeds, tractors, and chemical fertilizers also led to increased productivity in the rice sector. Between 1960-1999, rice yield per hectare doubled from 1,877 kilograms to 3,672 kilograms. In addition to rice, various other food crops are produced for local consumption. They include yams, pulses, grains, vegetables, and fruits. Most of these crops are cultivated in family gardens, except for potatoes and sugar. Sugar cane is cultivated in the dry zone, and Sri Lanka produces only 15 percent of what it consumes domestically.

The major plantation crops of tea, rubber, and coconuts continue to figure prominently in the economy of Sri Lanka; however, the contribution of these commercial crops to gross domestic product declined from 11.5 percent in 1970 to 5 percent in 2000. Tea, the prominent crop of the plantation sector, grows in many parts of the wet zone, and in particular in the central hill country. Sri Lanka is famous for its high quality black tea, and is the largest supplier in the world. In 1999, 269.3 million kilograms of tea (95 percent of total tea production) was exported, earning US$621 million in foreign exchange. The United Kingdom, Russia, and the Middle East are the major export markets.

The second major commercial crop is rubber, growing in the ridge and valley country of the wet zone interior. Of 159,000 hectares under cultivation, about 80 percent was being tapped (harvested) and in 1999, 96.6 million kilograms of rubber were produced. A sizable proportion of rubber production is used in the domestic manufacturing sector (56 percent in 1999) and the remainder is exported. In 1999 export earnings amounted to US$33 million. China is traditionally the major buyer of Sri Lankan rubber. The performance of this sector has been subject to instability due to unfavorable movements in world prices. Competition from synthetic rubber producers has caused rubber prices to drop. However, with rising petroleum prices (the major ingredient for synthetic rubber) there is a chance for world rubber prices to improve.

The third commercial crop, coconuts, is grown mainly in the hinterland of the western seaboard. Production in 1999 accounted for 2,828 million nuts, the highest output since 1986. Coconut (mainly coconut milk) is a major ingredient used in food preparation in Sri Lanka, and nearly 65 percent of the output is consumed locally. The remainder is exported in the form of kernel products (desiccated coconut, coconut oil, copra), coconut cream, and coconut milk powder. In 1999, kernel products generated US$129 million in foreign exchange.

Forestry and fishing are less important components of the economy. Forests in the dry zone were cleared for settlement and agriculture early on. Unsustainable agricultural practices such as chena cultivation and logging resulted in land degradation and a reduction in the size of forest reserves. The country has abundant fishing resources, with an exclusive economic zone covering over 500,000 square kilometers (193,050 miles), a coastline of about 1,700 kilometers (1,056 miles), and a massive network of inland water reservoirs suitable for fish farming. However, this potential has not yet been exploited. Most marine fishing is concentrated in coastal areas, which account for about 12 percent of the exclusive economic zone. Total fish production in 1999 was estimated at 280 thousand metric tons, and the contribution of this activity to gross domestic product was about 3 percent in 1999. Fishing is a traditional livelihood for people living in coastal areas: in 1999 about 145,000 people were employed in fishing activities. A slow-growing sector, fish production increased at an annual average of only about 3 percent between 1992 and 1999. Poor production is mainly due to a lack of technical knowledge and equipment.

The livestock sector in Sri Lanka is small, consisting mainly of the dairy and the poultry subsections. Unlike in the United States, where dairy production takes place on large farms, in Sri Lanka dairy farming is a small-scale domestic activity. Total milk production in 1999 accounted for 342 million liters, sufficient only to meet about one-fourth of local needs. The remainder is imported in the form of powdered milk (in 1999, 54,000 metric tons of milk powder was imported). An important development in the livestock sector was the rapid increase in the poultry production. In 1999 approximately 57 million metric tons of poultry meat was produced, increasingly becoming a common source of animal protein in Sri Lanka.

Is it possible to buy composting worms in Sri Lanka. If so from where?
6
iresha

what are the farming methods and cropping systems in Sri Lanka?
7
[ ]

It was very interesting in its own way. It was still helpful since I couldn't find anything else useful.
Is there any types of vegetables and fruits in particular?
8
miyuru dahanayaka

I wanna know about guava farming farmers and exporters. This information for my final year research paper. If you able to suport please send me a e mail.
10
Dinuka

I'd like to know the primary crops and the percentages grown in Sri Lanka.
12
Alan Perera

Where are the best manyok “cassava” in srilanka ?? Please help thanks looking for export quantity
13
Poornima

This article is good and informative. And i want to know which time period in Sri lanka implemented agricultural / crop diversification programe ?