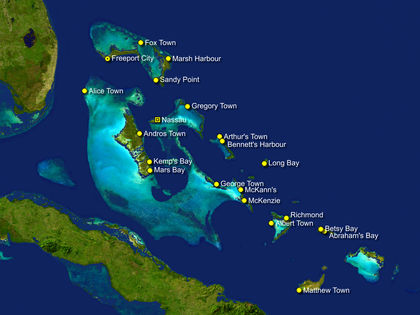 Commonwealth of the Bahamas

The Bahamas is a chain of 700 islands and about 2,000 cays (low islands or reefs of sand or coral). However, only 29 of the islands are inhabited. The Bahamas is in the North Atlantic Ocean on the eastern edge of the Caribbean, just 72 kilometers (45 miles) southeast of Florida. It has an area of 13,939 square kilometers (5,382 square miles) and is a bit smaller than Connecticut. The islands have a total coastline of 3,542 square kilometers (1,368 square miles). The largest city in the nation is Nassau, the capital, and the second largest is Freeport.

Bahamians are primarily of African descent (85 percent). People of European ancestry make up 12 percent of the population and the remaining 3 percent is of Asian or Hispanic origin. English is the official language, and

religious worship is largely Christian. The Baptist church has the biggest following (32 percent), with the Anglican, Roman Catholic, and Protestant churches well represented. The literacy rate is high, almost 100 percent.

Most Bahamians reside in urban areas, with two-thirds of the population living on New Providence Island where Nassau is located. Many others live in or near Freeport on Grand Bahama Island. There are small settlements throughout the outer islands, called the "Family Islands".

The Bahamas has no territories or colonies.

Sealey, Neal E. The Bahamas Today: An Introduction to the Human and Economic Geography of the Bahamas. London: Macmillan Caribbean, 1993.

i have heard so much about the bahamas,done a research on it and i can realy say that it is realy a paradise on earth.
3
jasmin

Bahamas is my dream place together with my family hope to it will come true.
4
Linda

This is the most beautiful country I have ever visit, love it
6
bryoni allen

The Bahamas is the dream place that i would really like to visit and i wish that u should have given us some more information like some tourists attractions.
7
joey

I love this country bahamas, can someone give me a contact of any african preferably a nigerian residing in bahamas?- (soldoru@yahoo.com) I want to visit the country soon and I will like to see my fellow african/ nigerian in bahamas, thanks
9
Dominick Buchanan

I love this city so much everybody should come. It will be nice the coral reefs
10
Mayer Separzadeh

Question #1. Can a foreigner buy a piece of property unders his or her name?
Question #2. What is the value of a beach property in relation to Miami?