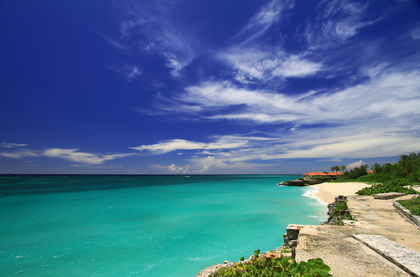 Barbados is an island situated between the Caribbean Sea and the Atlantic Ocean, northeast of Venezuela and east of the Windward Island chain. It covers an area of 430 square kilometers (166 square miles), roughly 2.5 times the size of Washington, DC. Its coastline is 97 kilometers (60 miles) in length and its capital, Bridgetown, is situated at a natural harbor on the southwest coast of the island.

The population of Barbados was estimated at 274,540 in mid-2000, representing a growth rate of 0.55 percent over the preceding year. The average annual rate of population increase from 1995 stands at 0.3 percent. At current rates, the island's population will reach approximately 288,000 by 2010. The government wants to restrict population growth because Barbados is one of the most densely populated countries in the world (estimated at 619 people per square kilometer in 1997, or 1,603 people per square mile). There is a well-organized family planning program in the island and the birth rate, at 14.45 per 1,000 population in 2000, is one of the lowest in the region. The migration rate was extremely high until the 1970s but, at 0.32 migrants per 1,000 population, is now low by regional standards.

The age structure of Barbadians reflects government planning policy and high living standards, with only 22

percent of citizens aged 0-14 years, 69 percent between ages 15 and 64, and 9 percent over 65. The infant mortality rate is 12.37 per 1000. Approximately 80 percent of people are of African descent, while a small but economically powerful white minority accounts for about 4 percent of the population. The rest are of mixed ethnic background. English is both the official and the spoken language, and the religion is Christian, represented by Protestant, Anglican, Roman Catholic, and other conventional churches.

Barbados has no territories or colonies.

Sugar and molasses; rum; other food and beverages; chemicals; electrical components; and clothing.

DIS helpin me alot with my social studies project
3
kurtisha

great info. exactly what i need for my social studies project THANKS
4
april

I got more information than I needed for my social studies report. This is best place I can get information from for anything I need to find out.
5
Taylor

Thanks this helped alot with my report. Glad I looked here!