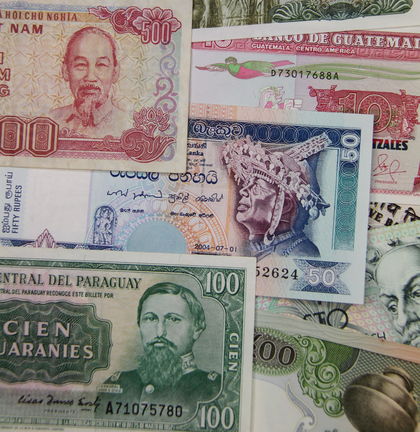 The Paraguayan currency has been remarkably stable in comparison to most of South America. The most significant hindrance to economic stability in Paraguayan history was the War of the Triple Alliance. This war, from 1865 to 1870, killed most of the nation's male population and devastated the national economy. Soon after, in 1870, the nation began reconstruction efforts and rebuilt the economy. The economy finally found stability again in the late 1910s and early 1920s.

The 1940s and 1950s were marked by price instability, and in response the government established the Banco Central, a central bank intended to perform many tasks. Its responsibilities included regulating credit, promoting economic activity, controlling inflation , and issuing currency. It also regulated banks (commercial, investment, and mortgage banks), savings and loans, finance companies and institutions, and capital markets. Further, the bank administered monetary controls and price stability. The Banco Central was successful until the 1980s. The 1970s and early 1980s showed rapid growth attributed to joint hydroelectric power ventures with Argentina and Brazil, but as the power plants were completed, the rapid economic growth came to an abrupt halt. The stable prices, credit expansion, and exchange rates of the 1960s and 1970s were replaced by the increasing inflation in the mid 1980s. By 1988, inflation had risen more than 30 percent. The Central Bank successfully tamed inflation with rising interest rates during the 1990s.

The growth of the 1970s allowed Paraguay to avoid the hyperinflation and the balance of payments crises that plagued the rest of the Southern Cone (Brazil, Argentina, and Uruguay). Large exports of soybeans and cotton also helped maintain growth and stability in the economy during this time, with the exception of a brief period from 1981 to 1983, when GDP fell more than 15 percent because of a combination of factors. Adverse weather shrank agricultural exports, currency in neighboring Brazil and Argentina was suffering devaluation , and trade relations with Brazil and Argentina were unfavorable.

The 1990s were a time of mixed results in economic development. The banking system is developing but still small. In 1992, the government approved measures to develop a stock market, and in 1995 Bolsa de Valores, the Asunción Stock Exchange, was created. It showed slower growth than expected at first, but now the stock market has grown and expanded to include many foreign corporations. Countries with companies listed the United States, South Africa, and Japan.

From 1993 to 1995, the GDP per capita increased by 18 percent and inflation dropped from 20 percent to 15 percent. In the late 1990s, though, Paraguay suffered from the devaluation of the currencies of other Mercosur member nations, particularly Brazil in 1998 and 1999. Still, the Paraguayan economy shrank only 0.06 percent in response to Brazil's devaluation of the real (Brazilian currency). Paraguay's currency value fluctuated little in the late 1990s, though many economists expected it would, due to severe political instability. The 2000 exchange rate showed G3,502 equal to US$1.