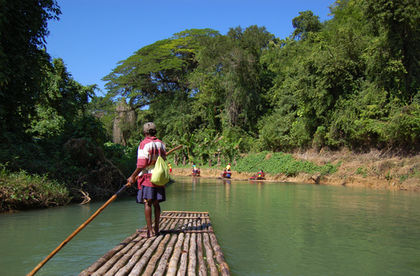 When it comes to wealth, Jamaica is a land of extremes. On the northern coast—home to tourism—and in the suburbs of Kingston, wealthy Jamaicans live in first-rate housing, visit shopping centers featuring the best imported goods, and enjoy an elevated standard of living. Living in such suburbs as Cherry Gardens, Arcadia Gardens, and Forest Hills, the wealthy send their children to private schools and to universities abroad, and employ private security forces. Yet not far from these wealthy enclaves a significant number of poor Jamaicans live in squalor, with poor housing, limited food supply, and inadequate access to clean water, quality health care, or education. Kingston's poor congregate in the slum districts of Trench Town, Jones Town, and Denham Town, where

water supplies are often polluted and violent youth gangs clash with police for control of the streets.

The wealth is distributed largely along racial lines, reflecting Jamaica's slave-plantation heritage. The descendants of black slaves tend to be among the poorest classes in Jamaica, while white and mixed-race descendants of plantation owners and traders tend to be better off. These extremes are reflected in the nation's distribution of income: in 1996 the wealthiest 20 percent of Jamaicans controlled 43.9 percent of the wealth, while the poorest 20 percent controlled only 7 percent. In fact, the poorest 60 percent controlled just 34.3 percent of wealth. Due in large part to the decline of services in urban slums, the percentage of people with access to safe water has declined from 96 percent in the period from 1982-85 to 70 percent in the period from 1990-96; access to sanitation facilities (plumbed toilets) has dropped from 91 percent to 74 percent in the same period.

Jamaica's rural poor also face difficult circumstances, for many workers must try to grow their own crops or participate in the informal economy —in some cases, the drug trade—in order to survive. Both the rural and urban poor have suffered from the long decline in the quality of social services provided to Jamaicans. Though the British built a well-developed health and education system on the island in the post-World

World War II years, a lack of government funding for schools and hospitals has meant that these services have declined in quality over the years. Despite this deterioration, 93 percent of Jamaican primary-level students are enrolled in school, and a government-funded health-care system ensures that Jamaicans have access to adequate health care.

Jamaica's high inflation and dependence on imports—especially for food, gasoline, and clothing—has meant that the poor have had to spend a high amount of their relatively small incomes on the necessities of life. Despite governmental food subsidies for the poor, similar to food stamp programs (vouchers that can be exchanged for food in grocery stores) in the United States, most poor Jamaicans spend more than half of their income on food and beverages. The difficulty that many Jamaicans face to earn a living on the island has contributed directly to the high immigration rate of the country and to its very low population growth. Despite the difficulties faced by Jamaica's poor, a study conducted by the Overseas Development Council judged that Jamaica's quality of life was better than both Mexico and Venezuela and equal to that of neighboring Trinidad and Tobago.

What is the poverty rate of Jamaica?
I cannot find it anywhere on the internet and I was wondering if you knew.
2
John Grimes

I am a black American (half mexican and black). The disparity in wealth and or education is appalling there. I have traveled to Jamaica and I love it. The people are the nicest that I've met and I've been all over the world. A few years ago I sent a letter to Ministry of Education during the time that I was still teaching school and offered to come and teach there for free during one summer if my boarding would be paid for. I mailed a letter out on 2 occasions and never got a response or even a phone call. What's up with that? If things work out for me and money is not an issue I plan on going back and teaching for free whether the government pays me or not. I will make a difference.
3
Rich Trapani

I just got back from Jamaica after spending a week volunteering with the Missionaries of the Poor. The poverty that I saw was astonishing, especially for a nation just a couple of hundred miles from the United States. While I am a proponent of capitalism, I am appalled that more is not being done to alleviate the suffering of so many people. Father Richard Ho Lung, the founder of the religious order in Kingston, definitely has done a great deal to help those in need. May God bless him and the Missionaries of the Poor!
4
Rashad O. Shaheed

What are the dominant religious groups in Jamaika, and are they active in providing humanitarian services to the population in need?
5
desrene brown

I am a citizen of Jamaica and I love it here. I would nt want to exchange my garden of paradise for any other place. if there is an increase in employment where the citizens can live more comfortably, then it will be heaven!!
Thanks to you all for you services and may God continue to bless and keep you!1
6
Dancin

What is the % of rich people, and the % of poor people?
7
tamlison

Thank you. You just helped me with a last minute assignment.
10
david harrison

Im travelling with my family to Jamaica for Xmas for the first time. Ive been waited a lifetime. Been doing some soulsearching and research about parents beautiful Island. But sometimes I wondered WHY!.
I saw a You tube Documentary "Life and Debt" about the ever present IMF agreements which bought the country to its knees. Everything is perpetually in decline since, And it adopts the same IMF model today just without financial subsidising..
Many weak negotiating & bad agreements helped alter the worlds perceptions of a people Basically stating that theres no economy in supporting such a nation for the IMF. And the desperate Jamaican leaders didnt even see it. So surviving didnt become a option, it became a way of life.
History shows that Jamaica has always been divided, so it was easy pickings for the IMF. Bad Aid is apparently all it deserves. Globalisation is about seeing the big picture but you have to know where you stand among your competitors. Does Jamaica, I think not.
11
Sherman

Am obsessed with the country jamaica, Yearning to visit there soon.
12
Kayla

I am a born Jamaican,and i believe it is beautiful island, however yes the country is somewhat segregated with the poor living in one area far from the rich and middle class but when it comes to races in Jamaica... from my observations...there are a lot of mix races here ( i am of African and Syrian descent) my grandma was a Lebanese and my paternal grandma and Indian so were all mixed up in Jamaica...hence the motto -Out of many one people
13
dontaskmeRN

true!! I visited both 'sides' of Jamaica over the years, and was quite shocked, so I decided to do some research worth it completely next visit is going to have a mission
14
Ian

Jamaica economy downfall starts from the time of the cold war. I guess it was a patient of what we know today as FAKE NEWS. THE GREAT COUNTRY we call USA started the fake news about Jamaica turning into communist country because they were getting Grant's from Russia and Russia was investing alot in Jamaica. USA was not and they are in our backyard. Russia needed Jamaica as much as Jamaica needed them. We produce the most in bauxite in the world and Russia was our number one customer. So the MIGHTY USA sees that we too friendly with Russia so they started this fake news and sanctions Jamaica. Which they have done to many countries now ( Venezuelan Iran n korea etc) and many in the past.So when them finish best up them chest, Russia back out and what happened to our number one exporter? Ask the young kids of today what is bauxite? I remember one day coming from school with a friend and walking through Ironshore golf course and an American call us over to help look for his golf ball he lost in the bushes. My friend found the ball. The American man gave my friend 30cents Jamaican and gave me a American quarter. This was in the late 70s. I look at the money and say. What am I going do with this quarter..it can't buy nothing..it no worth nothing in Jamaica. The point is Jamaica dollar and economy was stronger then the US back then before USA came up with the fake news about Jamaica. And what America did after...they take all rich people from Jamaica and tell them to live there and bring all them money with them cause Jamaica going to take it all from them. So these sanctions are not only to force out a government but leave a devastating impact on a country for many lifetime. Look at it...America is just 500 miles from Jamaica. Have u seen America build any schools or hospitals or roads for Jamaica. But Russia did, China did. Watch out we might get sanctions because of the coronavirus and we friends with China. Also the countrys that US bail out after imposing sanctions are white or countries that have something they want.
15
Daneil Hodges

Could I get the citation for this work, please. I would love the author's name, year of publication and place of publication.
Thank you!