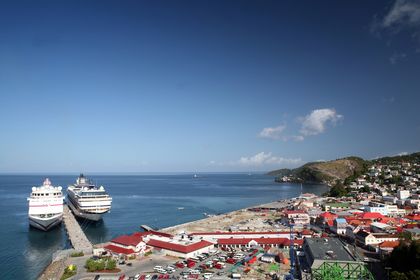 Grenada is an island situated between the Caribbean Sea and Atlantic Ocean, north of Trinidad and Tobago. Its total area is 340 square kilometers (131 square miles), about twice the size of Washington, D.C., and its coastline measures 121 kilometers (75 miles). Grenada has 2 dependencies in the Grenadines island chain: Carriacou and Petit Martinique. Carriacou (pronounced Carr-ycoo) lies 37 kilometers (23 miles) northeast of Grenada and is 33.5 square kilometers (13 square miles) in area, while Petit Martinique lies 4 kilometers (2.5 miles) further north and is only 486 acres in area. The capital of Grenada, St. George's, lies on the island's southwest coast and is the only town of any size.

Grenada's population was estimated at 89,018 in July 2000. This figure marked a drop of 0.36 percent from the previous year and a reduction of more than 2 percent from the estimated 1991 population of 91,000. Grenada's population has been declining for several decades despite positive statistics in terms of child mortality, life expectancy, and death/birth rate ratios. This is largely explained by a high rate of migration, calculated at 16.54 migrants per 1,000 population (2000). Grenadians migrate in large numbers to neighboring islands such as Trinidad & Tobago, where employment opportunities are greater, or more commonly to the United States and Canada. At current rates, Grenada's population will stand at approximately 86,000 in 2010.

Grenada's population is youthful, with 38 percent of Grenadians under the age of 15. A majority of the population lives in rural villages, and the World Bank estimates that only 37 percent are urban dwellers. The island is small enough for people to work or conduct their business in St. George's without living in the capital. About 85 percent of the population is of African decent, with smaller mixed-race and Indian communities. The latter are the descendants of indentured laborers (servants or laborers who pay an employer for transit to the employer's country, and work off their debt, often for many years) brought to the island after the abolition of slavery in 1833. English is the island's official language, though some Grenadians speak a French dialect, and Roman Catholicism, observed by 53 percent of Grenadians, is the dominant religion.

Grenada has no territories or colonies.