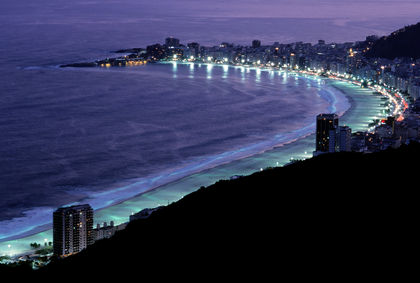 Roads are the primary method of transportation in Brazil of both passengers and freight. With an estimated 21.31 million passenger cars and 5.5 million commercial vehicles in 1998, the highway system is inadequate and poorly maintained. There are approximately 1.98 million kilometers (1.23 million miles) of highways in Brazil, but only 184,140 kilometers (114,425 miles) of these roads were paved in 1996. A study by the World Bank shows that in the early 1990s 28 percent of the country's highways were in poor condition. Furthermore, the lack of proper maintenance increased transportation costs in Brazil by nearly 15 percent over the same period. The government implemented road construction plans in order to integrate the industrialized south with the less developed northeastern and northern areas. This integration enabled agricultural producers to move goods to ports located in the coastal areas for exportation. The railway system in Brazil is very limited. There are only 27,882 kilometers (17,326 miles) of tracks in Brazil (excluding urban commuter lines) and this number is in decline as track falls out of service.

In contrast, Brazil's air transportation is well developed with 48 main airports, 21 of which are international. In 1998 about 31 million passengers used Brazilian airlines, traveling a total of 27.39 million kilometers (17.02 million miles). The total weight of airline freight was equal to 602.74 million metric tons and Brazilian airlines carried freight over 2.2 billion kilometers (1.36 billion miles). Guarulhos International Airport at São Paulo and Galeão International Airport at Rio de Janeiro are the most important and active international airports of Brazil.

Hydroelectric plants generate most of Brazil's electrical power, responsible for 91 percent of the total production. Secondary sources include fossil fuels and nuclear energy. Only state companies are allowed to supply electrical power to the population, producing a total of 316.927 billion kilowatt-hours (kWh) of electricity in

1998. Domestic production falls 20 billion kWh short of domestic need, causing Brazil to import electricity from neighboring countries such as Paraguay. Power supply is reliable most of the time, and shortages and blackouts are infrequent in urban areas.

Telecommunications services are well developed. Privatized in 1999, telephone service is provided by a number of privately held foreign capital companies. The country has approximately 19 million main lines in use (1997 est.) and 8 million mobile cellular phones in use (1998 est.). There are 138 television broadcast stations (1997) that are sent to 316 television sets per 1,000 people (1998). Computer access is still limited, evidenced by the number of personal computers (30.1) and Internet hosts (1.84) per 1,000 people recorded in 1998.

Brazil has many things that need to be improved in the infrastructure, but another big problem is corruption.