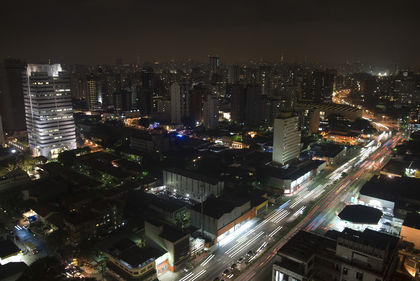 Located in South America, Brazil is the fifth largest country in the world, after Russia, Canada, China, and the United States. Brazil has an area of 8,511,965 square kilometers (3,286,482 square miles), extending 4,320 kilometers (2,684 miles) from north to south and 4,328 kilometers (2,689 miles) from east to west, and a total coastline of 7,491 kilometers (4,655 miles). Brazil borders all the countries of South America except Chile and Ecuador. Brazil's capital city, Brasília, is located in the country's midwest; its largest cities, São Paulo and Rio de Janeiro, are located in the southeast.

Brazil is the most populous country in Latin America and the fifth most populous country in the world. The highest concentration of Brazilians live in the Atlantic coastal region. Of the total population, the states of Minas Gerais, Rio de Janeiro, and São Paulo contain approximately 41 percent; the states of Rio Grande do Sul, Bahia, Pernambuco, and Ceará contain about 23 percent; and the remaining states hold about 36 percent. The population is extremely urbanized with 78 percent of the population living in cities. Approximately 29 percent of the population is between 0-14 years old, 66 percent is between 15-64 years old, and only 5 percent is over 65 years old.

About 55 percent of the Brazilian population is comprised of whites, the descendants of Portuguese, German, Italian, Spanish, and Polish immigrants; 38 percent are mixed white and black; 6 percent are blacks of African descent; and others comprise 1 percent. Immigration was a major determinant of the population structure in Brazil. During colonial times, Portuguese and Africans immigrated to the northeastern region of Brazil. During the period between 1821-1945, approximately 5.2 million Europeans immigrated to Brazil, settling in the southern agricultural regions. After World War I, the Japanese community in Brazil grew to become the largest expatriate Japanese group of the world, with more than 1 million immigrants.

SUGAR. Since the time of Portuguese colonization, Brazil has been the largest producer and exporter of sugar in the world. Sugarcane production is concentrated in the northeastern area. Brazilian companies process sugarcane into sugar and alcohol. Sugar is mostly exported to the rest of the world while alcohol is mostly used as fuel for passenger vehicles. Passenger vehicles in Brazil are powered by either a combination of oil and alcohol, or solely alcohol. The Brazilian government developed research and financial incentives for utilization of alcohol in passenger vehicles after the world oil crisis in 1973-74. Brazil's sugar production in 1999-2000 was equal to 20.1 million metric tons. Sugar exports for 1999-2000 were equal to 11.3 million metric tons.

Brazil's dairy production is the sixth largest in the world (after the United States, India, Russia, Germany, and France), but all of its production is consumed domestically. Total production of fresh cow's milk was equal to 22.8 million metric tons in 2000.

Brazil's pork production was equal to 1.95 million metric tons in 2000, mostly for domestic consumption. Fishing is limited, and lamb and sheep are not raised in Brazil due to the tropical weather.

The manufacturing sector contributed 22.7 percent of the gross domestic product in 1999, engaging 11.8 percent of the workforce in 1998. The manufacturing sector decreased as a percentage of gross domestic product from 31 percent in 1979 to 29.5 percent in 1989, and 22.7 percent in 1998 and 1999. This was caused in part by a lack of foreign investment and inflationary problems during the 1980s and 1990s. The instability generated by inflation and uncertain government policies caused tremendous fluctuations in manufacturing growth rates. Major products in the manufacturing sector are televisions, VCRs, telephones, and computer chips. There are a few national companies that are domestically oriented, such as Consul and Brastemp. There are also companies that are primarily export oriented, such as Nokia, Intel, and Compaq.

State participation in manufacturing occurs in the production of textiles and clothing, footwear, food, and beverages. These industries comprise a large proportion of the manufacturing sector, but there are also new industries that have been developed in the last few decades with government aid. Machinery and transport equipment, construction materials, sugar cane and wood derivatives, and chemicals are important manufacturing industries. Direct government participation is noticed in the oil processing industry and passenger jet aircraft industry through partial ownership of such companies. Indirect government participation is noticed in the textile industry and machinery industry through export subsidies and low interest loans.

Automobiles are the most important manufactured items in Brazil. Brazil's passenger automotive production was approximately 1.25 million passenger car units, 350,000 commercial vehicles, and 17,000 tractors in 1998. Machinery and transport equipment were the biggest exports from Brazil, accounting for US$12.6 billion in 1998, or 25 percent of total exports. Brazil has manufacturing plants for General Motors, Volkswagen, Ford, Fiat, Honda, and Toyota. Workers are highly unionized, receiving the highest salaries among the manufacturing industries. In 1998, 292,290 people were employed in the industry.

Crude steel production in 1998 was 25.76 million metric tons. Vast reserves of ore and high domestic demand for steel products have helped the industry. Brazil exported US$3.67 million in steel and ore in 1998.

The national textile industry is responsible for 3 percent of world production. Total sales average US$19 billion per year; exports were US$2.9 billion in 1998. Brazil has the largest textile operating facilities in Latin America. The textile industry is also labor intensive, employing 1.43 million people in 1998. Fibers and leather are used to produce clothing, shoes, and luggage. Brazilian shoes are exported mainly to Europe, where they are famous for their quality. The Brazilian textile industry was comprised of 44,478 mostly small producers in 1998.

The Brazilian paper and pulp industry was responsible for the production of 273,000 metric tons of newsprint in 1998. The industry consisted of approximately 200 companies, employing approximately 80,000 people directly in their processing operations and 60,000 people in forestry operations. Pulp and waste paper exports were US$1 billion for 1998.

The mining sector was protected by the 1988 constitution against foreign majority participation of direct mining companies. This was a setback for the development of the mining sector because domestic investors lacked the capital for extensive mineral exploration. Private Brazilian investors and Brazilian corporations own the majority of the mineral industry. The participation of foreign capital is very limited due to Brazilian mining laws. However, in 1995 the Congress approved an amendment to the constitution allowing private companies (including foreigners) to participate in the mining industry through joint ventures , deregulating investments, and the privatization of state-owned mining plants. Shortly afterwards, the state-owned Companhia Vale do Rio Doce was privatized.

In 1999 mining contributed 0.6 percent of the gross domestic product of Brazil. The country is the world's largest producer of bauxite, gemstones, columbium, gold, iron ore, kaolin, manganese, tantalum, and tin. Major exports are iron ore, tin, and aluminum. The states of Minas Gerais, Bahia, and Goiás, located in the midwest of Brazil, have deposits of diamonds and other precious and semiprecious stones. In 1991 production of diamonds accounted for 1,500 carats, sixth in the world. Reserves of petroleum in Brazil were estimated in 1997 to be at 657 million metric tons.

The number of tourists that visit Brazil increased considerably during the 1990s. In 1994, 1.8 million foreign tourists visited Brazil, generating receipts of US$1.9 billion. In 1999, 5.1 million foreign tourists arrived, spending over US$4 billion. Argentina ranked first with 1.5 million visitors in 1999, American tourists ranked second with 0.6 million visitors, and Germans ranked third with 0.3 million visitors. The average annual income of visitors in 1999 was US$37,000 and they spent an average of US$79 per day, excluding expenses of international airfare. Brazil has over 10,000 hotels and other forms of accommodation. Approximately 63 percent of the existing hotel rooms were occupied in 1998. Hotels generate over 1 million jobs and pay over US$400 million in taxes.

Tourists are attracted to Rio de Janeiro for its notable sights: the Pão de Açúcar (Sugar Loaf Mountain), with its cable car; the Corcovado, with its statue of Jesus Christ the Redeemer; and Copacabana Beach, with its beautiful people and mosaic sidewalks. The historic city of Ouro Preto in Minas Gerais, and the churches of Bahia also attract many tourists. Ecotourism is developed in the Amazon Valley cities such as Belém and Manaus, the Iguaçu Falls in the south, and in the flooded areas of the Pantanal located in the western central region. Brazil is most famous for its Carnival, that usually takes place in February. Rio de Janeiro's Desfile das Escolas de Samba (Samba Schools Parade) attracts millions of tourists every year.

Foreign and government investments in tourism are important to the economy. The Inter-American Development Bank (IDB) and the Brazilian government invested 1.2 billion in the northeast region, starting in 1994. Investments in that region were responsible for renovating airports, improving public sanitation, preserving natural ecosystems, and restoring cultural practices. These investments rapidly boosted the tourist economy in the northeast, and foreign investment helped with the construction of multimillion dollar resorts in the coastal areas of the northeast. Such investments helped attract an increasing number of tourists to the northeast region. Other investments funded by the IDB and Brazilian government are planned for the Amazon and Pantanal regions, and in the south of Brazil.

The government owns most of the financial sector, the largest component of the services industry. The 3 largest banks of Brazil—the Bank of Brazil, Federal Economic Register, and National Bank of Economic and Social Development (BNDES)— accounted for US$181.5 billion in total assets in 2000. The assets of the 3 major banks represented approximately 23 percent of the gross domestic product in 1999. The government holds the majority of the stocks of 3 national banks and a variety of state banks, with the exception of the privatized State Bank of São Paulo (BANESPA), the seventh largest bank in Brazil, and the State Bank of Rio de Janeiro (BANERJ).

The Bank of Brazil is the largest bank in Brazil and the largest financial institution in Latin America. It has 12.9 million customers and agencies in 30 different countries, employing 90,378 people. The total assets of the Bank of Brazil were worth roughly US$71 billion in 2000. The second largest bank, the Federal Economic Register, had assets worth approximately US$63 billion, employing 102,614 people in 2000. BNDES's assets were worth approximately US$48 billion, employing 1,246 people.

The Brazilian Discount Bank (BRADESCO) and Itaú have the largest assets in the private sector . BRADESCO has 3.6 million customers and more than 26 million checking accounts. Total assets for 2000 accounted for US$40 billion and US$27 billion for BRADESCO and Itaú, respectively.

The total assets of the 50 largest banks in Brazil were worth US$436 billion in 2000. This represented more than 50 percent of the total gross domestic product of that year. This part of the financial services sector employed 492,230 people in 2000.

This sector is responsible for the highest number of employed people in all sectors of the services industry. The number of companies that employ 500 or more workers is low; there were 75 companies which hired 500 or more workers in 1997 in the retail section, and 31 companies with 500 or more workers in the wholesale section. The bulk of employed people in this sector come from companies that employ less than 500 employees. Combined retail and wholesale sectors were made up of 708,635 retail and wholesale outlets. Total sales in the sector amounted to approximately US$300 billion in 1998. There are few retail chains in the economy. Most of them are located in the capitals of each state but are not part of the retail context in the less developed economies in rural areas. Food, grocery, and other retail chains are located in the coastal areas whereas small family-owned businesses compose the retail sector in smaller cities. The smaller retail businesses are responsible for employing a large number of people.

Brazil has no territories or colonies.

Bak, Joan L. "Political Centralization and the Building of the Interventionist State in Brazil." Luso-Brazilian Review . Vol. 22, No. 1, Summer 1985.

Great article!
I found this article after I had completed my report over Brazil, of course. I can only say that if i would've foun it before hand it would've made my research 100% easier!
2
Claire

Hi thank you for this awesome artical. Now i know more about Brazil and i'm thinking about visiting there a lot.
4
kylee

Like when you have a project about Brazil you really need this stuff badly! but when i found this life was 10 times easier thank you so much for this info! :)