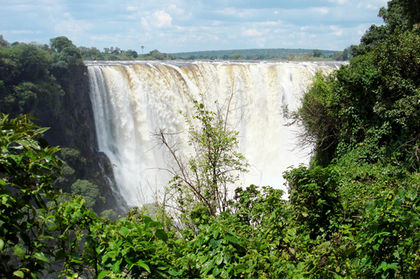 Zimbabwe sits astride the high plateaus between the Zambezi and Limpopo rivers, its main drainage systems. Much of the country is elevated, 21 percent being more than 1,200 meters (3,937 feet) above sea level. The topography consists of 4 relief regions. The high veld (an open, grassy expanse) rises above 1,200 meters and extends across the country from the northeast narrowing towards the southwest. The middle veld, lying between 900 and 1,200 meters (2,953 and 3,937 feet) above sea level, flanks the high-veld, mostly extending towards the northwest. The low veld stands below 900 meters (2,953 feet) and occupies the Zambezi basin in the north and the more extensive Limpopo and Sabi-Lundi basins in the south and southeast. The eastern highlands have a distinctive mountainous character, rising above 1,800 meters (5,906 feet), and include Mount Inyangani (sometimes called simply Inyangani), standing at 2,592 meters (8,504 feet) above sea level.

The country's population is diverse and was estimated in the mid-1980s to include—besides the indigenous people—some 223,000 people of European descent as well as 37,000 Asians and people of mixed ethnic backgrounds—all of them the legacy of the colonial era. The indigenous people accounted for more than 98 percent of the population in the mid-1997 estimates, and were comprised mostly of 2 broad ethnic or linguistic groups: the Ndebele and Shona. The Shona comprised 71 percent and Ndebele 16 percent of the population in 1997. There are, in addition, several other minor ethnic groups such as the Hlengwe, Sena, Sotho, Tonga, and Venda who constituted the other 11 percent. English, Shona, and Sindebele are the official languages universally taught in schools.

Urban growth has been rapid in recent years. Over the 1982-92 period, the population of Harare, the capital, is reported to have almost doubled from 656,000 to 1,189,103, while that of Bulawayo, the second-largest

city, increased from 413,800 to 621,742 over the same period. The urban poor, operating within the highly competitive informal sector are now a large and increasing part of the urban social structure.

Zimbabwe has no territories or colonies.

Hodd, M. "Zimbabwe." In The Economies of Africa. Aldershot:Dartmouth, 1991.

"Zimbabwe." In Africa South of the Sahara. London: Europa Publications, 2000.

this was great and think you should send the whole thing to me it helped me alot.. i
2
Tory

I am writing an essay for school on this country and this was very beneficial to me . It helped me learn many things that where needed to know fro this asighnment :)
3
chirori rememberance

this article helped me a lot. if there is something new please keep me updated