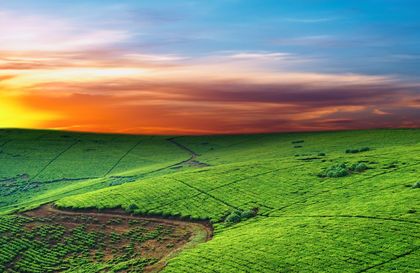 A landlocked state in Eastern Africa, west of Kenya and east of the Democratic Republic of the Congo (former Zaire), Uganda has an area of 236,040 square kilometers (146,675 square miles) and a total land boundary of 2,698 kilometers (1,676 miles). Comparatively, the area occupied by Uganda is slightly smaller than the size of Oregon. Uganda's capital city, Kampala, is located in the country's southeast on the shore of Lake Victoria, Africa's largest lake and the source of the river Nile. Lake Victoria is also bordered by Kenya and Tanzania.

The Ugandan population is primarily of African descent, consisting of thirteen principal ethnic groups, although there are actually 49 such groups in total. The rest of the population is made up of Asians and Europeans (around 1 percent) and a fluctuation of refugees escaping from crises in neighboring countries—most recently from Sudan, Rwanda, and the Democratic Republic of the Congo. It is important to note that Uganda had a large number of Asian citizens at independence in 1962; however, the majority of them were forcibly expelled under the regime of General Idi Amin (1971-78) in a racist attempt to "Africanize" the country.

Uganda is commonly conceived to be the epicenter of the HIV/AIDS epidemic; in fact HIV/AIDS in Uganda is commonly accepted to be a pandemic (the occurrence of a disease over a whole country). It is estimated that 110,000 Ugandans died from AIDS in 1999, and it has been the most common form of death of young adults since the late 1980s. It is important to understand that these deaths resonate beyond their own profound significance due to the socio-economic effects of HIV/AIDS. For example, the drawn-out nature of death from AIDS requires a large amount of care and attention. Therefore, large numbers of, predominantly, women who could be productively employed are spending their time caring for

the dying. In addition, by 1999 the cumulative number of orphans created due to AIDS since the pandemic began reached 1,700,000. This raises the problem of the development and guidance of Uganda's children. However, the Ugandan government was one of the first in Africa to promote public education programs and openness about HIV/AIDS. As a result of this proactive policy, Uganda is one of Africa's success stories for reducing HIV/AIDS; for example, 10,235 AIDS cases were reported in 1990 but only 1,406 in 1998.

Coffee is by far the most important factor in the nation's entire economy. Uganda is one of the largest producers of coffee in sub-Saharan Africa and exported 197,200 metric tons in 1998, second only to Côte d'Ivoire. This provided US$314 million in export earnings. Although this was a drop in earnings from the 1996 level of $396.2 million, the 1996 harvest had provided 81,511 metric tons more than in 1998. The country's high altitude, relatively high rainfall, and mild climate are suited to the growing of coffee. Robusta coffee is grown in areas near Lake Victoria and in some Western districts. Arabica coffee is grown in the volcanic regions in Mbale and Kapchorwa where the cooler, higher altitude provides the increased rainfall necessary for the growth of this more profitable crop. The dual process of the devaluation of the Ugandan Shilling and its flotation was intended to provide an incentive to producers to take advantage of more competitive exports and thus expand their production of exportable goods. On face value this process was a success as producer prices dramatically increased. For example, coffee farmers received a 182 percent rise in the price paid for their product, and there was an annual average growth of coffee exports of 6.5 percent between 1990-1997.

However, the apparent growth of Uganda's coffee exports does not take account of smuggling into the country from neighboring countries such as the war-torn Democratic Republic of Congo whose farmers often do not receive as good a price for their crops as those in Uganda. Furthermore, increased productivity was based upon an increase in the area cultivated rather than on higher yields. When there is a rise in available cultivated land it acts as an increased drain on the country's environmental resources. The 50 percent projected rise of the population by 2015 more than likely will increase competition, and perhaps conflict, over ever-decreasing land plots.

Regarding improvements to the agricultural sector, farmers simply lack the access to capital ( see Services rubric below) in order to mechanize production and increase agricultural productivity. Productivity per agricultural worker was an average of US$345 per annum over 1996-1998. In consequence, farmers are unable to take full advantage of increased returns for the export of coffee when they do arise, for instance, during the coffee boom of 1994-95 where the price in U.S. cents to a pound of coffee was 126.83. This failure to improve production is based upon a lack of investment and an assumption of the continuation of the usually relatively low levels paid by the volatile world market for primary commodities . For example, in 1999 the price in U.S. cents to a pound of coffee was only 67.65. Considering the long-term maturity of coffee plants, the instability of international markets does not provide much of an incentive for improved efficiency of production. It should also be noted that export crops such as coffee are very susceptible to natural disasters, which further reduces their economic viability. For instance, a hurricane in 2000 pushed Uganda's national harvest back a year.

Due to the severe insecurity permeating Uganda through the 1970s and most of the 1980s, tourism was a very limited sector. Today, the majority of Uganda is entirely safe for tourists and the country has a lot to offer, such as a number of beautiful reserves and national parks, vast lakes, rare and endangered wildlife, relatively untouched rural communities, and safe cities. By 1995, 159,899 tourists provided receipts of US$188 million; by 1997 receipts from tourism rose to US$227 million. However, it should be noted that internal tourism expenditures drew out almost as much money as was brought in to the country, with US$137 million being spent by Ugandans abroad in 1997.

Uganda's banking system had been in disarray throughout the 1970s and 1980s, in part due to an almost full government monopoly of this sector. The 2 most important national banks, the state-owned Bank of Uganda (BOU) and the Cooperative Bank, had received automatic liquidity support from the Uganda Central bank (UCB) up until the early 1990s—that is, the UCB would supply banks with money to prevent their financial collapse even if they had been making irresponsible and irretrievable loans, often to allies of the various political regimes. As a result, the UCB's non-performing loans accounted for 75 percent of its total loan portfolio. Uganda's most important financial mechanism was bankrupted.

In order to make the UCB less of a drain on state revenue, the IMF and World Bank encouraged its privatization, a 48 percent cut in personnel, and a reduction of branches from 190 to 85. The improved stability of the banking sector has encouraged people to save, and a 1995 IMF report claimed that bank deposits grew from 4 percent of GDP in 1989-90 to 5.8 percent in 1993-94. However, due to the economy's severe underdevelopment, low incomes, and low opportunities for lending, there is limited incentive for private-sector banks to operate. Even though the economy has been substantially liberalized, foreign banks have failed to reinvest or to re-establish themselves, or to innovate their practices in Uganda, in part due to the fact that more than half of commercial banks made losses in 1994.

The privatization of the banking system has reduced the availability of basic banking services, in particular for rural farmers. In 1972 there was one branch per 34,000 people; by the mid-1990s this figure was 164,000. This means that the most important sector of the economy, namely agriculture, receives insufficient investment to improve productivity. Primarily due to fraudulent practice by employees, 3 of Uganda's national banks collapsed in 1999, namely the Cooperative Bank, International Credit Bank, and Greenland Bank. This has given foreign-owned banks such as Stanbic, Barclays, Standard Chartered, and Trans Africa Bank increased footing in those areas they deem commercially viable, thus providing greater competition against the remaining national banks.

Uganda has no territories or colonies.

Belshaw, D., and P. Lawrence. "Agricultural Tradables and Economic Recovery in Uganda: The Limitations of Structural Adjustment in Practice." World Development. Vol. 27, No. 4, 1999.

Tukahebwa, G. B. "Privatization as a Development Policy." In Developing Uganda, edited by M. Twaddle and H. B. Hansen. Oxford: James Currey, 1998.

Uganda Shilling (USh). The largest Ugandan note in circulation is USh10,000 and the smallest is USh50. Recently introduced coins come in denominations of 50, 100, 200, and 500. There are plans to discontinue all notes in these denominations.

i am fine in india . how are uganda people . i think there are to hard workers
2
Levson Kimbugwe

Helo, thank you so much for that basic research, I've really learnt alot than I even knew about my home country but could you please base on current affairs not only on history. I guess the research draws more attention to the years between 1995 - 2000 but its now 2011 remember. Your positive reaction our gratitude
3
Roger Garza

Colleagues, better compare Uganda to the UK. The UK is slightly bigger than Uganda but the population of the former is almost 2.5 times that of the latter. Peter Nsubuga
5
???

Great info for my project thank you!!! p.s. i did cite your cite on my sources