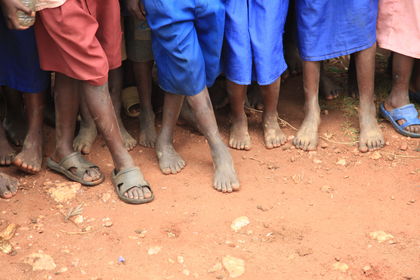 With an average GDP per capita of US$332 in 1998, Uganda is one of the poorest countries in the world. The vast majority of Ugandans are farmers on small plots of land which are used for subsistence agriculture or for the cultivation of cash crops such as coffee and tea. However, most of this land is owned by landlords such as chiefs or government functionaries who seldom reinvest in the productive capacity of the village as they can simply rely on rents. This disparity of the ownership of the means of production is reflected by vast inequalities in the distribution of income. The poorest 20 percent of the country controls only 6.6 percent of the wealth, whereas the richest 20 percent benefit from 46.1 percent. In fact, 69 percent of the population lives on less than US$1 a day and the majority of this limited income (63 percent) is spent on food. As a result, in a country whose government spends only 1.9 percent of its GDP on health, the majority of Ugandan citizens struggle to acquire even the most basic health care. There are only 4 doctors and 28 nurses per 100,000 people. Nonetheless, the government has helped to reduce the infant mortality rate from 110 deaths per 1,000 births in 1970 to 84 by 1998.

Most Ugandans have to work 2 or 3 jobs simply to survive, often even to secure a standard of living below the poverty threshold. Moreover, one or more of these jobs are often within the informal sector which draws taxation

revenue away from the government. With the increased unemployment levels associated with the privatization and reduction of employment opportunities in the public service, the army, and former parastatals, workers have become an increasingly flexible and less expensive factor of production. Consequently, trends after 1991 have been in the direction of increased inequality, both between rural and urban areas but also in intra-urban terms, as wages did not increase anywhere near as fast as the rise of profits.

The labor surplus and the desperate need for employment has meant that employers can offer almost whatever they want for wages as they know that they will fill their vacancies. As Susan Dicklitch observes in her book, The Elusive Promise of NGOs in Africa, even the middle class, the traditional bastion of democracy and agitator for change, like the working class are "often too busy trying to eke out a living" to fulfil their historic political role. However, if Uganda's GDP continues its 7 percent annual growth of recent years, if President Museveni's anti-poverty strategy promoted in March 2000 is effective, and if the country continues to benefit from the proposed US$2.3 to US$2.5 billion in external aid, then there is hope that the standard of living for the majority may improve.

This is a very useful article. Please update it to reflect the current trends in Uganda.
3
matthew

The major cause of poverty could be the government that pays less heed to development programmes. worsestill the country's population is characterised by internal and external conflicts like between tribes and religions.the main solution is having a joint effort to fighty poverty by the people.
4
Joseph Mulungi

Great effort. Thank you. My request though is that just as you kept track of the GDP in 5year intervals from 1975 to 1998, can you please kindly update this page to reflect current state of affairs in Uganda? Update is long overdue.
5
kyeza william

Examine Uganda's implications of the population situation to the realization of the third millennium goals.Help me so that i can answer that question.
6
police isaac

The article in very interesting but please highlight more on the current trend in Uganda.thanks
8
okanya brian

I enjoyed reading this basing that i was born in 1984. And your research started about 1985. I think looking by the trend lending and borrowing money from banks, the commercial sector has become so tight. There is need to analyse the trends from 1998 to now. No clear picture at the moment. I think the economy of the country is getting worse by the day. No figures but i live in it.
10
Akiso Jude

i really enjoyed it because it has helped me in my research about poverty which is a threat to our country Uganda mostly in rural areas.
11
yee

This was a good website. helped with my school project. Yay this good thanks bro