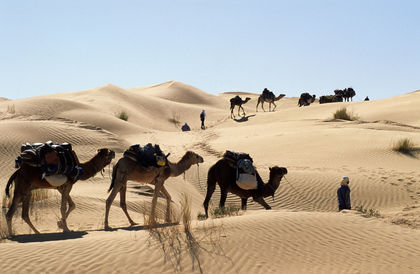 Situated in northern Africa, Tunisia is bordered by Algeria on the west and Libya on the southeast and by the Mediterranean Sea on the north, where it has a coastline of 1,148 kilometers (713 miles). Tunisia has an area of 163,610 square kilometers (63,169 square miles), making it slightly larger than the state of Georgia. Its capital city of Tunis is located on the country's northern coastline.

The Tunisian population is almost entirely of Arab descent (98 percent). Europeans make up 1 percent of the population, and Jewish and other ethnic groups make up the rest. Tunisia's population is young: 30 percent of the people are below the age of 14, and only 6 percent are older than 65. The population is increasingly concentrated along the eastern coast, with 43 percent either living in the capital city or on the mid-eastern and northeastern coasts. There has been a large population shift from the countryside to the cities due to increased job opportunities in the urban areas; since 1984, 86 new towns have been created.

Tunisia was the first Arab country to initiate nationwide birth-control programs. Since the creation of the Department of Family Planning and Population in 1966, the birth rate has fallen sharply, from 3 percent in 1966 to 1.17 percent in 2000. This drop is the result of an increase in the standard of living, widespread access to education, and improved health care. The number of women who are entering the labor force increased by 12 percent in 2000, and women's rights are actively promoted.

The production of oil in Tunisia began in 1966 when 2 main oil fields in the southern part of the country were tapped: El Borma and Ashtart. Over the years, many smaller oil fields have been discovered, and by 2000 there were 28 known oil deposits. In 1999, just over 4 million tons of crude oil was produced, and it is estimated that Tunisia has 55 million tons (400 million barrels) of total oil reserves. In spite of the fact that Tunisia has fairly small oil reserves compared with those of other countries in the region, overseas companies still consider it worth the risk to prospect for oil because the tax laws are favorable to even the smallest of discoveries. In 1999 more than US$100 million was invested in exploration, with some 40 separate explorations being carried out in 2000. Petroleum products, such as motor fuels, fuel oil, and liquefied petroleum, are not being produced to full capacity because of the small size of the state-owned refinery at Bizerte on the northern coast.

Prior to 1966, gas was largely imported via the TransMediterranean pipeline that transports Algerian gas to Italy. In that year, British Gas invested US$600 million into the Miskar field in the Gulf of Gabés, a site that produced 168 million cubic feet of gas per day in 2000, a figure that was forecast to rise to 230 million in 2001. Given plans by British Gas to invest an additional US$450 million in 2001, it is likely that this industry will continue to grow and become increasingly important.

Tunisia is one of the world's largest producers of phosphates, which are found mainly in mines in the southern part of the country. Private-sector activity is limited in this industry which is dominated by the state-owned Compagnie des phosphates de Gafsa. A reduction in exports, falling world gas prices, and rising labor costs led to financial difficulties within the company in the mid-1990s, but it recovered with the upturn in world prices. In 1999, about 8 million tons of phosphates were produced. Tunisia also has reserves of other important minerals including iron ore, lead, zinc, and sea salt. The production of iron ore has been steadily declining since 1993 as reserves neared depletion.

Manufacturing accounts for 20 percent of Tunisia's GDP and employs 20 percent of the country's labor force in 5 different sectors: textiles, food processing, mechanical and electrical industries, construction materials, and chemicals. Almost one-third of the manufacturing sector is involved in the production of textiles, a sector that grows an average of 6 percent a year. In 1999 the textile industry accounted for 6.7 percent of the GDP. Some 1,800 firms are involved in textile production, 700 of which are partly or totally owned by foreign companies. Textile exports were valued at more than 3 billion Tunisian dinars in 1999, a figure equal to 23 percent of total exports; however, the sector is heavily dependent on Europe for its raw materials and faces the challenge of increased competition from Asia.

Manufacturing overall continues to perform better than any other sector, having grown an average of 5.2 percent a year since the early 1990s. However, product quality is variable, and much of the labor force is under-skilled. Manufacturing is dependent upon imports of raw materials, spare parts, and capital goods and is challenged by increasing competition within its European export markets. Tunisia signed an association agreement with the European Union in 1995 which will lead to free trade in industrial goods with Europe by 2008. In 1996, the government initiated a project aimed at industrial modernization.

Employing 270,00 people, the tourism sector is of vital importance to the Tunisian economy, contributing 6.2 percent to the GDP each year and 16 percent to foreign exchange earnings. In 1999 Tunisia welcomed 4,832,000 tourists, three-quarters of whom were French, German, Italian, or British. In the wake of the Gulf War (1990-91) the number of tourists fell sharply, and in 1995 there was a brief downturn due to an economic decline in the European Union. The sector has been growing steadily since that date. Important Tunisian tourist destinations include the historic site of Carthage and the many locations in the desert where the film Star Wars was shot.

The government has identified the need to attract tourists from Central and Eastern Europe. Development has slowly started to expand beyond the principal resort areas, and more moderately priced restaurants are beginning to open. Tunisia is becoming increasingly popular as a multi-seasonal destination because of its range of climactic conditions, its popular skiing resorts, and its attractive beaches. It still remains heavily dependent on the European market. Compared to the rest of north Africa, revenue per tourist remains fairly low: US$340 compared with US$468 in Morocco and US$850 in Egypt (all 1999 figures). This low amount is mostly due to the lack of opportunities for tourists to spend their money.

The financial-services industry is largely regulated by the Central Bank of Tunisia. In 1999 there were 8 development banks, 2 merchant banks, 13 commercial banks, and 8 offshore banks . The banking system continues to be highly inefficient, holding large amounts of debt. In 2001 the sector is planning to open itself up to foreign competition following agreements signed with the European Union and the World Trade Organization.

The financial markets in Tunisia are composed of a semi- privatized stock exchange (partly owned by the government and partly owned by the private sector) known as the Bourse des Valeurs Mobiliéres (BVM), plus various bond and stock/bond funds. The government opened the BVM in 1990 primarily to encourage foreign investment, but it has not succeeded in its aim due to the overvaluation of stock, illiquidity (unavailability of hard money), and a lack of investor confidence. In response, the government privatized the managing company, BVM, and set up a state-controlled watchdog, a central share depository, and a guarantee fund. In 2001, there were 23 mutual funds, 87 investment funds, and 25 risk capital funds totaling US$1.24 billion.

Tunisia has no territories or colonies.

AWESOME INFO! I love your website i can find any information for my projects for the universty.
3
mohamed zahrouni

I love Tunisia! I love the Tunisian people! Tunisia is the best! Woah there other countries, you don't look like Tunisia to me!