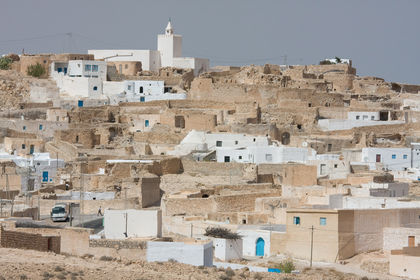 The distribution of income in Tunisia, like that in many developing countries, is quite unequal. The top 20 percent of the people in Tunisia earn 46.3 percent of the country's total income while the 20 percent at the bottom of the scale earn only 5.9 percent of income. The majority of wealthy Tunisians live in Tunis and are able

to purchase the most expensive imported goods from up-scale shops. Still, unlike many less developed capitals in the Middle East, there is a real sense of community in Tunis and a desire to create an egalitarian society.

When President Zine El Abidine Ben Ali came into office in 1987, about 22 percent of the Tunisian population was living below the poverty line, impelling him to declare an all-out war on poverty in his inaugural speech. In 1992 he created the National Solidarity Fund whose goal was to promote 1,144 disadvantaged regions throughout the country, at an estimated cost of US$500 million. Since 1996, more than US$300 million has already been raised. Created in 1998, the Tunisian Solidarity Bank has also offered thousands of micro-credit loans (loans of very small amounts to help get a small business started, for example) to young graduates and small business owners.

Currently, the 6 percent of the population who are under the poverty line receive heavy subsidies from the government. Tunisia's first involvement with the World Bank in 1960, an education project, is testimony to the country's commitment toward the reduction of poverty and the redistribution of wealth. Various indicators also show a substantial improvement in the living standards of all Tunisians over the past 20 years. Average life expectancy increased from 67 in 1984 to 72.4 years in 1999. The annual rate of population growth dropped from 1.7 percent in 1994 to 1.1 percent in 2000. The per capita income