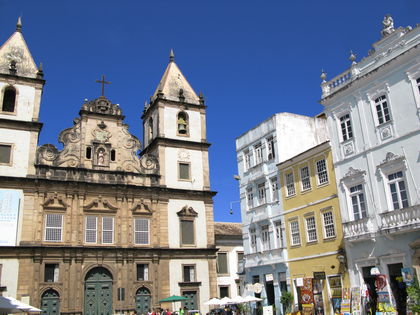 About 3000 BC , nomadic Nahuatl Amerindians, originally from present-day Mexico, migrated to Central America. The Pipil Amerindians were living in the region now known as El Salvador at the time of the Spanish conquest. They were an agricultural people, with a civilization similar to that of the Aztecs, except that the Pipil had abolished human sacrifice. In addition to the Pipil, two smaller groups, the Pocomans and the Lenca, lived in the area.

In 1524, Pedro de Alvarado, a Spanish conquistador sent by Hernán Cortés from Mexico, invaded El Salvador. After being forced to retreat by Amerindian resistance, he returned in 1525, defeated the Pipil and founded Sonsonate and San Salvador. During Spanish colonial period, San Salvador was one of six administrative regions under the captaincy-general of Guatemala. Spanish settlement consisted of a few cattle ranchers and some farmers.

The republic was formally proclaimed on 25 January 1859. Turbulence, political instability, and frequent presidential changes characterized Salvadoran history during the second half of the 19th century. This period also saw the growth of coffee as El Salvador's leading product. The Salvadoran elite, known as the "14 families" or simply "the 14," created large coffee plantations, often on the land of displaced Indians. There followed a period of relative stability during 1900–30, but the seizure of power in 1931 by Gen. Maximiliano Hernández Martínez brought a period of constant military rule for almost 50 years. Hernández ruled for 13 years. Known for his mysticism, he also presided over the brutal suppression of a peasant uprising in 1932, with about 30,000 people killed. Few of the governments after Hernández even tried to reduce the gap between the landowners and the landless classes, and those who did were doomed to failure.

Landless Salvadorans found land available in neighboring Honduras. During the 1960s the influx of Salvadorans increased, provoking countermeasures from the Honduran government. Tensions rose between the two nations, and on 14 July 1969, they went to war for four days. The immediate occasion of the conflict was the Central American soccer championship (which El Salvador won over Honduras on a disputed referee's call), leading US journalists to dub it the "Soccer War." A total of 3,000–4,000 people on both sides were killed. After an OAS-sponsored cease-fire, the two sides worked out a peace settlement, which was signed on 30 October 1980. A leftover border dispute was settled by the International Court of Justice (ICJ) in 1992.

In 1972, the military candidate for president was opposed by José Napoleón Duarte of the Christian Democratic Party (PDC). Duarte was denied election by fraud and sent into exile. Pressure for reform now came from the armed resistance from several leftist factions. The right unleashed "death squads" whose function was to intimidate and eliminate any who attempted to introduce change to the country.

By the late 1970s, the situation had become a civil war. The guerrillas had consolidated under the Farabundo Martí National Liberation Front (FMLN), and right-wing violence escalated. The military had not distinguished itself in its response to the violence, having engaged in widespread repression against suspected rebels. In 1979, a coup brought to power a set of reformist officers, who found common cause with such civilian leaders as Duarte. The junta liberalized the political system, setting legislative elections for 1982. The junta nationalized banks and the coffee export trade, while launching an ambitious and controversial land-reform program. Attacked by both left and right, the junta was unable either to suppress left-wing guerrillas or to control its own security forces, which began their own vigilante campaigns even as the angry landowners hired "death squads" to suppress opposition among peasants, students, clergy, and other groups.

In December 1980, José Napoleón Duarte of the Christian Democratic Party was installed by the junta as president—El Salvador's first civilian head of state since 1931—and a state of siege was proclaimed. Human rights groups could scarcely keep up with the number of violations occurring. In 1980, Archbishop Romero was assassinated while celebrating mass. In January 1981, the guerrillas launched their unsuccessful "final offensive," and throughout the rest of the year the bloodshed continued unabated. It is estimated that at least 62,000 people died between October 1979 and April 1987, most of whom were civilian noncombatants murdered by death squads and government security forces.

The junta headed by Duarte oversaw the drafting of a new constitution, adopted on 20 December 1983 by a constituent assembly that had been elected in March 1982. An interim president, Álvaro Alfredo Magaña, served through the March 1984 presidential election. In 1984, Duarte defeated Roberto D'Aubuisson Arrieta of the National Republican Alliance in a runoff election in May. Duarte thus became the first constitutionally elected president in over 50 years.

Duarte's regime was a difficult balancing act between right and left, in the midst of attempts to bring about reform. The Christian Democrats won a majority in the National Assembly in the March 1985 legislative elections, but Duarte's overriding problem was the ongoing civil war. Eventually, economic dislocation brought on by Duarte's austerity measures and charges of corruption led to the election in 1989 of ARENA's (National Republican Alliance) Alfredo Félix Christiani Burkard. As Christiani came to office, many feared the worst, for ARENA had been tied to former candidate D'Aubuisson, an extreme anticommunist who had frequently been accused of plotting against the government and supporting the death squads.

Christiani allayed these fears, and then some others. He called for direct dialogue between the government and the guerrillas. Although the process was rocky, and punctuated by military escalations, on 31 December 1991 the government and the FMLN signed an agreement, the Chapultepec Accord, which supplied the long hoped-for political solution to the civil war. A ceasefire took effect 1 February 1992, and held until 15 December 1992, when the FMLN officially laid down its arms.

New elections were held in 1994, and voters returned ARENA to power, with Armando Calderón Sol winning the presidential runoff election. Calderón embarked on an ambitious economic liberalization plan, cutting tariffs, privatizing banks and pensions, and attracting foreign investment. However, in spite of healthy economic growth of 4–5% a year, underemployment and low wages continued for much of the nation's workforce, accompanied by an upswing in violent crime. In the countryside, marauding bands robbed agricultural workers, while urban dwellers fell prey to organized gang activity, imported by Salvadorans returning to the country from the United States in the early 1990s. In spite of a 1996 12-point government plan that included investment in infrastructure and social services, the electorate voiced its discontent with the ruling ARENA party in the March 1997 parliamentary and local elections by giving the leftist FMLN its first significant legislative boost since the 1992 peace accords and effectively legitimizing the former guerillas as a major political force. FMLN representation in the 84-member legislature increased from 14 to 27 seats, while ARENA's share fell from 42 to 28 seats. In addition, FMNL candidates made significant gains in local elections throughout the country. The accord calls for reforms throughout the military, including the purge of officers linked to human rights abuses, and a reduction by 50% of the force. While the former has been a slow process, the latter goal was achieved ahead of schedule. In addition, paramilitary groups were to be banned, and land reforms were to be initiated.

Presidential elections were last held on 7 March 1999. The ruling ARENA party retained control of the presidency. ARENA's Francisco Flores won with 51.4% of the vote. In the March 2000 parliamentary election, ARENA only obtained 36% in the Assembly, securing 29 out of 84 seats in the legislative body. The strong showing by the FMLN made them the largest party in the Assembly, with 31 seats. In the most recent parliamentary elections, held in March 2003, the FMLN consolidated its position, but did not win ground as it got 31 seats in the Assembly. ARENA fell to 27 seats. The parliamentary elections were widely seen as a prelude to the March 2004 presidential election. The 2% margin of victory enjoyed by FMLN will make that election a highly contested affair, but the former leftist guerilla movement turned political party could very well win the presidency for the first time in that country's history.

where is the growth of population, economy. it shoul have the overall groth since 2000