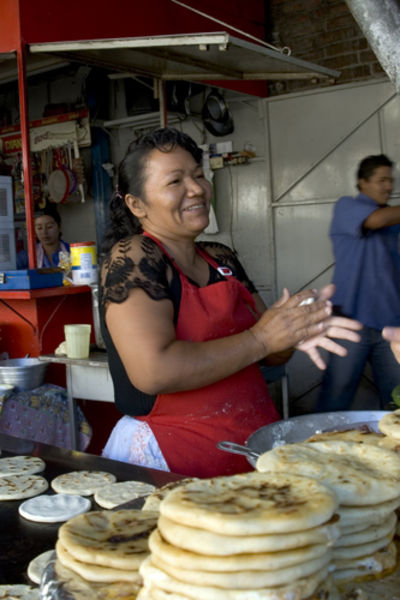 FLAG : The national flag consists of a white stripe between two horizontal blue stripes. The national coat of arms is centered in the white band.

WEIGHTS AND MEASURES : The metric system is the legal standard, but some old Spanish measures also are used.

The population of El Salvador is racially and culturally homogeneous, with about 90% mestizo (mixed white and Amerindian), 1% Amerindian (mainly the Pipil tribes), and 9% white.

The official language of the country is Spanish. A few Amerindians continue to speak Nahua.

In 2002, 16,800 personnel were in service with reserves consisting of registered former soldiers. Military numbers had been reduced prescribed by the peace accord ending civil war. There were some 15,000 members in the army, 700 in the navy, and an air force of 1,100. The paramilitary consisted of the national civilian police numbering 12,000. In 1999, $112 million, or about 0.7% of GDP was budgeted for national defense.

The fishing industry, which centers on shrimp, has undergone significant development since it first gained commercial importance in 1957. The best coastal fishing grounds are off the southeastern sector. Scaled fish include freshwater robalo, sea bass, mullet, mackerel, swordfish, and redmouth; a tuna industry has been operating since 1963. The total fish catch was 9,590 tons in 2000.

By 2000, El Salvador had at least 19 insurance companies in operation. The 1995 Insurance Law provided national treatment for foreign insurance firms. In 2001, there was $59 million worth of life insurance premiums written.

According to the Heritage Foundation in 2000, El Salvador has the most open trade environment in Central America. El Salvador completed a Tariff Reduction Program in 1999 and as a result has tariffs of 0% on capital goods, 0–5% on raw materials, 5–10% on intermediate goods, and up to 15% on final products. Some items, such as textiles, agricultural products, and vehicles receive higher tariffs of up to 40%.

El Salvador has no territories or colonies.

THIS IS VERY GOOD INFORMATION THANK YOU !IM AM GONNA GET GOOD GRADES ON MY PROJECT
3
ms.suh