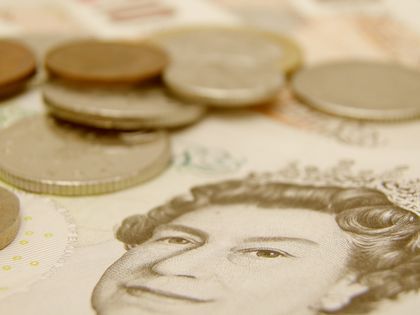 The British pound sterling has traditionally been one of the world's strongest currencies. In fact, the recent increase in value of the pound relative to other currencies such as the yen or the dollar has meant that goods imported are worth less than similar goods manufactured in the United Kingdom. It has also meant that British exports are more expensive than similar goods from other nations. In 1995, 1 U.S. dollar was equal to 0.6335 pounds. By 2000, 1 U.S. dollar was only equal to 0.6092 pounds.

London is one of the world's leading financial centers. The London Stock Exchange is the nation's largest stock exchange. In 1999, there were 1,945 companies listed on British stock markets. Total stock value in 1999 was US$2.93 trillion. While the British market is generally free and open, there are restrictions on foreign stock ownership of companies that the government still partially owns. In the case of state-owned companies, foreign ownership is limited to 49 percent of stock.

In 1997, the government gave the Bank of England independence in currency matters. This means that the bank, not the government, is now responsible for monetary policy in the United Kingdom. The Bank sets the interest rates in the country and controls the amount of currency in circulation. One of the main policy goals of the bank is to keep inflation low, with a target of maintaining inflation at 2.3 percent. The bank has allowed the foreign exchange reserves of the United Kingdom to decline from US$42 billion in 1995 to US$32 billion in 1998 and US$29.8 billion in 1999. The reason for this decline has been the effort of the Bank of England to increase the amount of money in circulation (since 1995, the bank has increased the amount of currency by 7 percent per year). Partially because of these increases, inflation remains low—1.6 percent by government estimates in 2000.