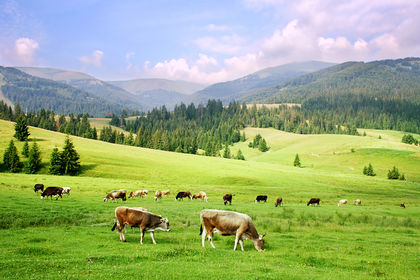 Ukraine is blessed with rich farming and forestry resources. According to the Statistical Year Book of Ukraine (1996), about 71 percent of the country's surface (41 million hectares) was used for agricultural activities.

In recent years, agricultural production has declined drastically because of a decrease in the number of tractors and combine harvesters in working order and to the lack of fertilizers and pesticides. According to official data, between 1991 and 1997, the number of tractors in use decreased from 497,300 to 361,000. (In order to operate efficiently, it is estimated that the country would need 515,000 tractors in use.) Similar shortfalls exist for harvesting combines. Between 1990 and 1997, the consumption of pesticides and fertilizers per hectare declined about 78 percent. From 1995 to 1999, crop production declined by an average of almost 10 percent per year, while livestock production declined by an average of 9 percent per year. These shortfalls in agricultural inputs reflect declining investment in agriculture, and feed directly into declining production.

Under communism, agricultural lands were held by the government and worked by the people, who owned no land. Privatization planned to shift most such land into the hands of individuals and farming collectives (jointly held farming cooperatives). By August 1995, the transfer of lands into private hands had begun. Over 8 million hectares of land had been privatized, with plots averaging 5 hectares. By 1996, most of the agricultural land in Ukraine was in collective and private hands, although 40 percent was still owned by the government. Household plots and private farms accounted for about 15 percent of the Ukrainian territory and they filled an important role in the delivery of products to the marketplace.

Im an Norwegian man who nearly lived permanent in Ukrain the last 2 year. I have find a lot of intresting agroculture produckts with a lot of positive helse efects, as eks Jerusalem artistock. My following question, is it posibel to find some cind of list over this spesifick produsers ?
I hope and look forward for some cind of guide of products.

The big offensive, the attack of the very sharp ended western capitalism towards the whole Ukraine is going on. It is trying to create a full mess is created in the agricultural sector in Ukraine. The foreign big bank-assorted companies are trying to extinguish the local activities and the full rural entrepreneurship. In this ugly "play" the players try to create various kinds of shortages or bottleneck for only for their own advantage. No matter what is the national economy if the turnover does not go directly or indirectly into the pockets of the speculators. And speculators are, in this atmosphere, rather openly invited from all possible directions (but Russia), preferably anywhere in the countries living under NATO-illusionism and of course, from the most potential occupiers, over all the "little state" USA.
3
Kamal Soni

We trade, process and exports Peanuts, Seeds, Raisins, Chickpeas, Spices and Spices Powder, Coconut and Cocoa Powder, Dry fruits and Nuts and other origin products also many other agriculture products.
We also provides market analysis, quality control, shipment control, care after deliver goods to make optimal deal and reach satisfaction level of our customer and it will help us to keep our customer for long term. If our customer trust justified, they will keep buying from us for long time , and all buyer always want one trust-able company.
Our company has already satisfied many customers with our exemplary customer services.