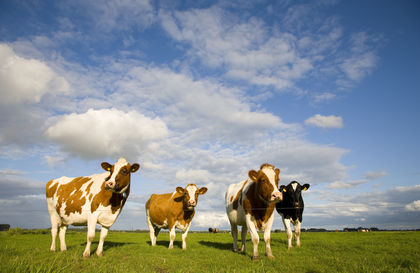 In 1998, agriculture accounted for 3.5 percent of the kingdom's GDP. Employment in agriculture has actually been increasing slightly over the past decade. In 1995, there were 109,000 people employed in the sector, but by 1999 that number had grown to 116,000. Much of this increase has been the result of growth in the dairy and horticulture segments of agriculture. As in many other countries, Dutch agriculture has been marked by the decline of the small, family-owned farm and the rise of large corporations that specialize in agriculture. Many Dutch agricultural firms have also become increasingly international and do a significant amount of their business overseas or in other European nations.

Dutch agriculture is divided into 3 broad areas: crop production, dairy and livestock production, and horticulture. The nation's agricultural land is also divided into 3 broad types: grasslands, farmlands, and horticultural lands. The nation's extensive waterways and network of dams and dikes allow for easy irrigation and have produced very fertile soils. On the other hand, the increased use of chemicals in agriculture has created environmental pressures and led to new ecological policies that are designed to reduce damage to the kingdom's environment. Partially because of pollution concerns and partially because of health considerations, the consumption of organic foods (crops and livestock that are raised without chemical fertilizers or pesticides) has increased. While these foods now account for 2 percent of total production, by 2010 they are expected to comprise 5-10 percent of total production.

The main food crops are barley, corn, potatoes, sugar beets, and wheat. Potatoes are the main crop by volume, and in 1999 Dutch farmers produced 8.2 million metric tons of the crop. That same year, the Dutch harvested 5.5 million metric tons of sugar beets, 1 million metric tons of wheat, 240,000 metric tons of barley, and 58,000 metric tons of corn. Despite its wheat and barley production, the nation is a major importer of wheat for animal fodder and cereal production. After suffering a significant drop in production in 1998 because of flooding and bad weather, agricultural harvests were up 23.9 percent in 1999. In 1998, the value of exports was US$18.7 billion, while in 1999 it was US$31.7 billion. The major agricultural processed product was cigarettes. The Netherlands is one of the least forested countries in the world. Over 90 percent of its forest products have to be imported.

Dairy and livestock production is highly specialized and technologically sophisticated. Extensive grasslands provide grazing for dairy cows and beef. Dutch farmers have some of the highest yields of beef and milk in the world (behind only the United States and Great Britain). The nation is self-sufficient in dairy production and most dairy goods are exported. The main dairy exports include butter, cheese, and condensed milk. The number of dairy cows has remained relatively constant in the kingdom. In 1994, there were 1.69 million dairy cows and in 1998 there were 1.61 million. In 1997, the nation produced 11 billion kiloliters of milk, about half of which was used to produce cheese.

Many of the small, independent Dutch dairy farms have been bought by large corporations. One of the largest dairy corporations in the Netherlands is Campina Melkunie. In 1999 this large, multinational company did only 36 percent of its US$5 billion business in the Netherlands, with the rest centered in various EU nations. The Dutch food and beverage company Unilever is one of the world's largest corporations. The Dutch also have a large brewing industry. Firms such as Heineken and Grolsch export beer around the world and have operations in 170 nations.

Besides dairy cows, the other main types of livestock are beef and veal, chicken, duck, lamb, pork, and turkey. Eggs and beef are the main livestock exports. Total livestock numbers have declined slightly over the past few years. For instance, in 1994 there were 7.7 million head of cattle, but by 1998 that number had declined to 4.3 million. Likewise, there has been a similar decline in the number of pigs. In 1994 there were 14.56 million pigs; however, by 1998 that number had fallen to 13.45 million.

Seafood consumption has risen substantially in the Netherlands over the past 2 decades. Dutch fishermen harvest some 407,000 metric tons of seafood each year. About half of this is consumed locally and the rest exported. The Dutch also import significant amounts of seafood, including squid, prawns, shrimp, and crab.

Horticulture, especially the growing of ornamental plants and flowers, is a major factor in Dutch agriculture. The Dutch export significant amounts of cut flowers and bulbs, and the nation is world-renowned for its tulips. About 75 percent of flowers are exported, and there has been dramatic growth in exports to the United Kingdom, Italy, and Russia. This amounts to some 9 billion flowers per year. Horticulture is conducted in both open fields and through the use of glass greenhouses. The Netherlands now contains over half of all of the greenhouses in Europe, and there is a total of 44,000 acres of flowers under cultivation. Over 3,000 companies are engaged in horticulture in the kingdom.

this aricle helped me out a lot with my shcool project. thanks
2
Delaney

thanks for the article, this helped me with my report.
3
TOME TIMOV

This article helped me with my Powerpoint that helped me graduate early. Thanks God. I hated that school. So I graduated early with Highschool credits... No one knew Junior highs gave out Sophomore classes..
5
Daisy

this article is great Ii finally get my history and a great mark on my project!
6
Shankar MK

Stavya Eco is a startup company in India being promoted my professionals with wide experience. Our core values are â€“ Innovation, Accountability, Long relationships and Mutual trust. The company has a portfolio of products in sustainable energy and advanced agriculture/horticulture. One of our focus areas is Bioponic growing media. Our growing media range includes Coco Peat and other innovative natural fibre based media. We will also be producing blended media with Coco Peat, Bio-Char, Vermi compost and other high nitrogen fixation slow release fibres.
We are looking for buyers/partners from across the globe who would be interested in having a long term relationship with us for mutual benefit. We are open to long term price contracts. This is an unique opportunity for buyers to be associated at an early stage with a startup company to get long term price benefits. If interested please contact
Shankar MK
Email : Stavyaeco@gmail.com
Phone: +91 9945650128
7
monicah naisola

this article will help me with my case study.thanks
8
Mahrukh

WOW...that's all i'll say. This was the only website which actully helped me :) ty
9
secondplanet

A lot of good info, thanks! I was looking for an article like this.
10
Monty

i learned so much about the holland information.i can find every thing from this article like agricultural practices, economy, bordering countries,etc
12
namugera francis

I have learned much about the Dutch farming, its so fantastic in fact this article will help when i am making my references in my lessons
13
Alex

Helped me with a school project, had the info I needed and much more! very detailed and great info in general
14
Armando

thank you so much! a lot of good information and made my paper a hundred times better
16
Clement Iddagoda

I am Agriculturist and i like Netherlands agricultural news.
17
BYENKYA SAMUEL

I need information on how to improve my dairy production to manufacturing level in Uganda . Thanx