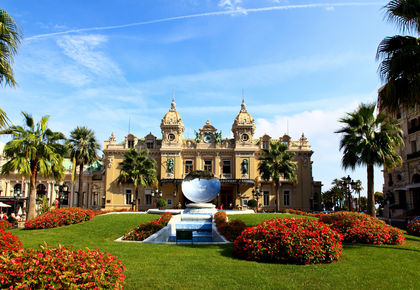 Monaco, a small independent hereditary principality in Western Europe, is located on the Mediterranean Sea along the southern coast of France, which is also known as the French Riviera or Côte d'Azur. Monaco is 18 kilometers (11 miles) east of the French city of Nice, near the border with Italy. The second smallest independent state in the world (after Vatican City), and almost entirely urban, it forms an enclave in southeastern France, surrounded on the north, east, and west by the French département (administrative division, or region) of Alpes-Maritimes. The country is only 1.95 square kilometers (0.75 square miles) in area, or about 3 times the size of the Mall in Washington, D.C. The terrain is hilly, rugged, and rocky, but very highly urbanized. The principality, a famous maritime resort, is composed of 4 quartiers (quarters): Monaco-Ville, the capital (an ancient fortified town located on a rocky promontory extending into the Mediterranean); La Condamine (the section along the port); Monte Carlo (the principal residential and resort area); and Fontvieille (a newly constructed industrial park reclaimed from the sea). The name "Monaco," derived from the ancient Greek Monoikos (meaning "of the old town"), is usually associated with the mythical hero, Hercules.

Monegasques represented a mere 16 percent of the population in 2000. Other ethnic groups include the French (47 percent), Italian (16 percent), and other nationalities (21 percent). French is the official language; English, Italian, and Monegasque (a blend of French and Italian) are also widely spoken. The traditional Monegasque language is used by the older people and is taught in the schools. The economy of Monaco offers more than

30,000 jobs. Immigrant labor, especially from France and Italy, is heavily relied upon because the number of jobs available outnumbers the number of citizens in the labor force . Many affluent Americans, as well as French, Britons, Swiss, Belgians, and other Europeans, live in the principality. The prevailing religion is Roman Catholicism, accounting for 95 percent of the population. Roman Catholicism also is the official religion, though freedom of religion is guaranteed by the constitution. Education is free and compulsory for children ages 6 to 16.

There are no arable lands or other agriculturally suited areas in the principality; virtually 100 percent of the Monaco territory is heavily urbanized. Accordingly, there is no commercial agriculture in the country. All foods are imported and some of them are further processed and exported.

Monaco is a popular world luxury resort, attracting affluent tourists to its casino, rich cultural schedule, and pleasant climate. Situated in the heart of the Riviera—the narrow coastal strip extending along the Mediterranean from Hyeres, France, to La Spezia, Italy— it benefits from the proximity of the renowned French resorts of Saint Tropez, Antibes, Cannes, Nice, and Menton. The latter 2 cities are connected by 3 scenic highways, which run through or near the Monaco territory and its chief tourist quarter of Monte Carlo along the sheer cliffs of the Maritime Alps. Both private and business tourism are thriving in the principality, and there are about 2,500 hotel rooms, most of which are in the 4-star category or higher. In 1993, 601,111 rooms were occupied overnight, resulting in an average annual occupation rate of 48.3 percent. For several years, the government has been making considerable efforts to attract more business tourists in order to increase hotel occupation, since occupation by the private clientele is essentially seasonal. Among the points of interest in Monaco are a cathedral, a palace in the medieval and Renaissance styles, and a world-renowned oceanographic museum established in 1910. A major source of revenue is the famous gambling casino. The Monte Carlo Opera and Philharmonic Orchestra offer ballet and music events, and the museums, spas, beaches, flower gardens, marinas, fine dining spots, luxury boutiques, and vistas all contribute to the attractions of the principality. The Monaco Grand Prix and the Rally Monte Carlo are popular annual automobile-racing events. The Societe des Bains de Mer, a company partly owned by the government, operates the casino and most of the hotels, clubs, beaches, and other places of entertainment. There are also notable foreign direct investments in the Monaco tourist industry.

Monaco is a hub of international commerce, importing and exporting products and services from all over the world. It is in full customs integration with France, which collects and rebates Monegasque trade duties . Monaco participates in the EU market system through France. No recent trade statistics for the principality have been made available.

Economic prosperity and the proportionally large number of jobs available, along with the government's sensitivity to safety and environmental protection, create favorable working conditions in the principality. The unemployment rate, compared to French and EU standards, is very low at 3.1 percent in 1998. No major labor unrest has been reported recently.

Monaco has no territories or colonies.

Yt looks and sounds amazing. I have never been out of South Africa and after watching the wedding I wish my wife was not scared of flying as I would make a point of visiting Monaco.
God bless.
2
Azhar Yousaf

Do i need visa for visiting Monaco on Canadian Passport.your country's embassey is available in canada.

On pakistani passport we need to have vise before visiting Monaco.How to get vis,Do your country has embassey in pakistan.

Your reply is awaited.