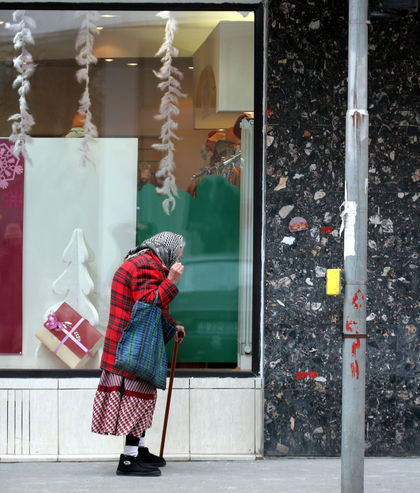 Under communism, Romania was a comparatively egalitarian society, and this has remained the case. Nevertheless, inequality has increased in the past 10 years. In 1989, the top 10 percent of the population earned around 2.1 times more than the bottom 10 percent. By 1998, the ratio was 3.0, around Western European levels.

At the same time, the rapid rise of inflation during the 1990s and the collapsing power of the Romanian currency have left many in poverty. Cornelia Tesliuc, in a study for the World Bank, estimates that poverty has risen

six-fold since 1989. That has left some two-thirds of the population (14.7 million people) living on the international equivalent of less than US$4 a day. Yet nearly all these people can still afford a basic food basket, and malnutrition is still rare.

Poverty is far greater in rural areas than in the towns. The northeastern regions, near the border with Moldova, have suffered most, thanks to the collapse of badly located industrial plants placed in these regions in the 1970s. Southern regions, near the Bulgarian border, are also poor. Meanwhile, the wealthiest regions are around Bucharest and in the western regions around Timisoara. But even in wealthier regions, pockets of poverty remain.

One major reason was the break-up and restitution of agricultural land, which left many people living on small subsistence farms. Unemployment has risen to over 10 percent from zero in communist times, thanks to struggling industry. A comprehensive government safety net is in place, providing a wide range of payments to pensioners, the unemployed, and large families. But strained government finances means the social payments have become tiny in real terms. Meanwhile, the average gross salary was just US$136.60 a month in January 2001.

As yet, the growing inequality has not had a noticeable effect on education levels. As in other ex-communist countries, Romania's literacy rate is relatively high, at 97 percent for women and 98 percent for men. The governent

maccepts that it is vital to maintain these standards if Romania is to overcome poverty in the future. Unemployment is already affecting the less well-educated disproportionately. And there are worrying, if unsubstantiated, reports that school attendance is falling rapidly in some of the poorest rural areas and particularly among the Roma minority.

Maintaining health standards is also important. Romania's health-care system provides for universal access to care, funded from a state insurance fund. But it has proved difficult to maintain standards in the face of rising health-care costs. Many patients report that they have to make unofficial payments to doctors and nurses in order to get treatment, which makes access difficult for the poor. Health-care workers argue that low wages force them to accept such tips.

One of the key problems facing Romania is its orphanages. Abortion and contraception were made illegal in 1966, in an attempt to build up a communist work-force. The result was thousands of unwanted births. Some 150,000 children now live in orphanages, and though Westerners' attempts to adopt some of these children or donate money have helped, they have also brought new problems. A system of illegal adoption agencies has

grown up around the orphanages, and the foreign aid has encouraged corruption. In 1999, the European Union told Romania that it would have to stamp out this corruption and improve conditions in the orphanages before it could be admitted to EU membership.

A poor family in Romania is likely to be one with 6 or more members, including 4 or more children. It will probably be headed by a woman (particularly an elderly woman), with only primary education. The head of the household will be either unemployed, self-employed, or a subsistence farmer with less than 2 hectares of land. The family is also likely to be a Roma family—Roma are 3.5 times more likely to be poor than other Romanians.

A wealthy family in Romania is likely to be an urban couple with no children and high education. They are likely to be young and employed in a high-paying sector such as financial services.

Dear sir
I am a south african who was married to a romanian.My ex wifes parents reside in south africa and are romanian citizens,her father was a fighter pilot in the communist regime and mother was a school teacher My ex pleads poverty for her parents all the time saying they do not get a pension from Romania,it has come to light they do receive a pension.
Would her father be receiving what is called a preferential pension and how much could that be in dollars what other beefits would he be receiving?
Would her mother also be receiving a pension?
Thankyou Shaun Hoffman