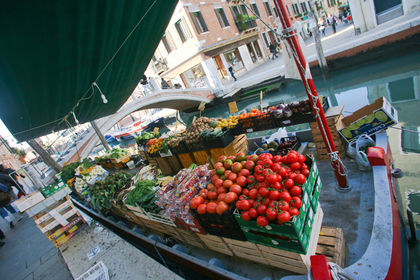 Italy recorded a trade deficit for several decades, largely due to the fact that the country lacked energy resources and was entirely dependent on imports for its supply. However, the 1990s brought a change of fortune, beginning with the devaluation of the lira in 1992 which allowed many businesses to compete in overseas export markets, particularly in Asia markets and the United States. The reduction of oil and gas prices in the

mid-1990s gave a further boost to small and medium-size companies, as did their aggressive promotion of their products, which enabled them to penetrate foreign markets. Today, "Made in Italy" is in many countries a well-regarded indication of quality. In 1998, Italy recorded a trade surplus, with imports totaling US$215.887 billion against exports worth US$242.332 billion. That surplus has since been trimmed, with export of US$241.1 billion in 2000 against imports of US$231.4 billion.

Italy benefits from the EU free market, which is not subject to any trade barriers or tariffs , and 56.8 percent of Italian exports went to other EU countries in 1999. Italy's main export destinations within Europe are Germany (16.4 percent), France (12.9 percent), the United Kingdom (7.1 percent), Spain (6.3 percent), and the Netherlands (2.9 percent). The country's biggest commercial partner outside Europe is the United States, which takes 9.5 percent of Italy's export goods. Recently, a number of Asian countries have become important buyers of Italian products, and exports, particularly of clothes and shoes, to Japan, South Korea, and China are increasing. Italy's major exports are transport equipment, electrical machinery, textiles and clothing, chemicals, and food and beverages. The single largest export is transport equipment, with FIAT the main supplier. FIAT not only exports the motor cars (including Ferraris) for which it is known worldwide, but also a number of other vehicles ranging from train carriages and metro cars to trucks and motorcycles.

The products of its EU partners also dominate Italy's imports. In 1990, over 61 percent of total imports came from EU countries: Germany (19.3 percent), France (12.6 percent), the Netherlands (6.3 percent), and Spain (4.4 percent). Outside the EU, the United States contributes 5 percent of imports. The composition of imported goods is evidence of the lack of energy resources and raw materials from which the country suffers. Thus, metal represents 9.9 percent of total imports, and petroleum represents 4.5 percent. Transport equipment also figures prominently, as do chemicals and food. All of the most important multinational businesses, across all sectors, operate in Italy, either directly or through subsidiaries. A number of them invested quite heavily in the country, particularly after the liberalization of the European market in 1987, under the auspices of the EU.

Good information. It found evrything I needed for an assignement I had. :]
2
sasha

What trade barriers exists in the us, italy, and switzerland?
3
Laxmi