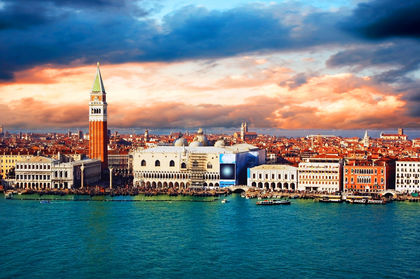 Italy has an efficient and modern infrastructure, even though it performs poorly compared to other Western European countries of comparable size. The whole peninsula is well connected through an extensive system of railways, expressways, national roads, airports and seaports. Most of the infrastructure was rebuilt after the ravages of World War II and is subject to constant improvement and upkeep. However, many important projects have failed to materialize, among them the subway system in Naples, and more railways in the south and east to facilitate the movement of goods. At the same time, funds were given to many useless projects, built solely to line the pockets of those whose political or economic support could thus be counted upon.

Italy has a number of important international airports and the national carrier, Alitalia, has a fleet of 166 planes which transport 25 million passengers annually and connect Italy to 60 other countries. Overall, Italy has 136 airports, the most important being Fiumicino (Rome), Malpensa and Linate (both serving Milan), Ronchi dei Legionari (Trieste), Caselle (Turin), and Marco Polo (Venice). Seaports used to be a key element of the Italian transport system; they handle a substantial percentage of cargo until the mid-1970s. Due to the development of alternative means of transportation and competition from neighboring ports, however, their traffic has declined somewhat. The ports of Trieste, Genoa, Naples, Taranto, Augusta, Gioia Tauro, and Livorno are economically important to their respective regions. Italy is a major power in container shipping in the Mediterranean. The Italian merchant fleet consists of over 2,000 ships, 1,331 of which are over 100 tons. The country also has 1,500 miles of waterways that are used for commercial purposes, but this system is relatively undeveloped.

Since most goods in Italy are transported by road, the system is constantly upgraded and improved. It provides a highly developed and efficient network of interconnected highways and lesser roads, particularly in northern regions. The main routes at the hub of the road system are Turin-Milan-Venice-Trieste, Milan-Bologna-Florence-Rome, Milan-Genoa, and Rome-Naples. There are 6,460 kilometers (4,014 miles) of expressway, mostly in the northern and central regions, and the system overall is comprised of 654,676 kilometers (406,815 miles) of paved roads. Links to the rest of Europe are excellent. However, even Italy's extensive and sophisticated road network is now barely able to cope with the steadily increasing traffic.

The country's rail system is also highly developed and traverses a distance of 19,394 kilometers (12,051 miles). Italian passenger trains are generally punctual, comfortable, and cheap compared to the rest of Europe. They are the preferred means of travel for many commuters as well as tourists, who can thus avoid congested roads and urban areas. In order to improve the system, the state-owned rail company, Ferrovie dello Stato (FS), is currently developing a project to introduce high-speed trains like the French TGV.

Infrastructure is not the same quality throughout the country. While the road and rail networks are intricate and plentiful in the north and center of the country, the southern infrastructure is poor. Northern Italy's impressive economic growth and geographical proximity to the heart of Europe made it a key commercial area, and the

infrastructure developed accordingly. By contrast, the geographical isolation and poor economic development of Southern Italy meant that infrastructure was never a priority except for seaports.

Italy has very few natural resources and must import most of them from neighboring countries. Crude oil comes mainly from Libya, Algeria, and countries in the Arab peninsula. Petroleum represents 4.5 percent of all Italian imports. Gas comes from Algeria, Tunisia and Russia through a number of pipelines. Furthermore, unlike Germany and France, Italy has no nuclear power capability and is completely dependent on imported energy. For this reason, Italy is one of the few Western European countries to enjoy very good relations with a number of Arab states. In 1998 and 1999, Italian prime ministers were the first Western leaders to visit countries such as Iran and Libya after many years of diplomatic isolation. In 1998, Italy consumed 266.705 billion kilowatt hours (kWh) of electricity, provided mainly by the formerly state-owned company ENEL, which was privatized in 1999. The generally reliable 220-volt power system covers the whole country.

Until recently, the state-owned company Telecom Italia provided telecommunications services in Italy, but the market recently opened to competition, thanks in part to the privatization of Telecom Italia in 1997, which remains the principal provider. There were 25 million main telephone lines in use in 1999. Like many other Western European countries, Italy is experiencing the Internet revolution, and in 1999 there were 68 Internet hosts per 10,000 people. More recent, but unconfirmed, figures claim that 10 million Italians surf the net. What distinguishes Italians from their neighbors in Western Europe is the quantity of mobile phones in circulation. They have proved particularly popular in Italy, and by 1998 there were 355 mobile phones per 1,000 people. This figure has certainly increased dramatically since then and recent figures record that 48 million cell phones have been sold in Italy since 1995.

thanks. this was great@! i did my project well cuz of this.
3
Lisa Hamlet

This is a great website and has great information. Thank you so much for your help with my project.