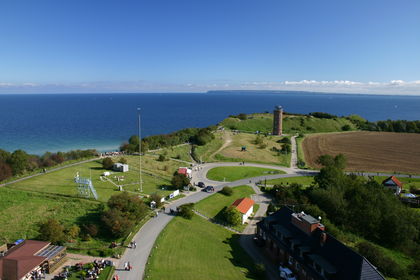 Agriculture is important for the country's food security and also a provider of jobs. It produces about DM84 billion worth of goods annually and purchases goods for around DM52 billion. Over 80 percent of Germany's land is used for agriculture and forestry. Like other sectors of the economy, it has undergone profound structural changes in the second half of the 20th century. In the western states, the number of farms decreased dramatically between 1949 and 1997 as machines gradually replaced human workers, and productivity increased. In 1950 1 farm worker produced food for 10 people; by 1996 1 farm worker produced food for 108 people. Attracted by a better income, many farmers left agriculture for the industrial and service sectors. Family farms predominate in Germany's old western states, and in 1997, 87 percent of all farmers in western Germany worked on fewer than 124 acres. Individual farm enterprises have also gained ground in the east: in 1997 they accounted for 80 percent of agricultural output from the eastern states, while working on only slightly more than 20 percent of the agricultural land available in the east.

Chief agricultural products include milk, pork, beef, poultry, cereals, potatoes, wheat, barley, cabbages, and sugar beets. In some regions wine, fruits, and vegetables, and other horticultural products play an important role. Agricultural products vary from region to region. In the flat terrain of northern Germany and especially in the eastern portions, cereals and sugar beets are grown. Elsewhere, on more hilly terrain, and even on mountainous land, farmers produce vegetables, milk, pork, or beef. Fruit orchards and vegetable farms surround almost all large cities. River valleys in southern and western Germany along the Rhine and the Main, are covered with vineyards. German beer is world-renowned and is produced mainly, but not exclusively, in Bavaria. Germany has a high level of exports of farm products: in 1997, its exports had a total worth of DM42 billion. Agricultural imports amounted to DM72 billion, making Germany the world's largest importer of farm products.

Important areas of German agricultural policy have transferred to the European Union, particularly in market and price policy, foreign trade policy, and structural policy. EU agricultural reforms in 1992 cut market price supports, replacing artificial prices with government subsidies, and put stricter controls on output volume. Through the reduction of price supports and through additional measures, the reforms promoted more effective farming methods and more ecologically safe agricultural production. The federal and state governments, in their turn, provided financial assistance for agricultural development, land consolidation, village renewal, and construction of country roads. Special funds were available for disadvantaged areas where agriculture was an important economic and social factor. The government's requirements of good agricultural practice required that fertilization and plant protection did not exceed an established maximum, and farmers who used environmentally friendly farming methods received financial compensation in recognition of their environmental policy.

I want to know how do you manage your land and farm. How dou you Identified many problem in a feasibility study
3
.......

Im Seaching This for a grade 7 history project and it was Hard to understand Please make it more breif Incase Other People Need it in the Present Thanks,

Put up some pictures to show what you are talking about.
6
sam

What does Canada give to Germany in exchange for these products?
7
Daniel

I am also doing this for a 7th grade report :D Thanks you guys :)
-Claire
10
Ibeawuchi emmanuella

Do u farm outside germany.? I am a female Nigerian farmer looking for seedlings with enhancement
11
bam bam

im doing germany for a grade five 25 research report. this is one of my topics :) :)

this website is hard to understand. there are to many big words for a middle schooler doing a report on germany agriculture
13
JAI SINGH

I AM INDIAN FARMER.I WANT TO GET SOME SAMPLE OF WHEAT SEEDS.
ANY ONE CAN DO THIS.
14
poopaa

thank you, you helped me on my social studies project :)
16
Lize Dippenaar

My husband is a farmer in South Africa. We are going on a tour via Mannheim, Munich, Innsbruke and want to meet and visit some other farmers. What is your agricultural shops or business name where I can contact somebody who can help me.
17
birkle martin

To Nr. 16
Im a German Farmer, settled in Canada since January 2012, coming from Germany, Bavaria close to
Munich and I have still many friends there, farming all kinds of farming.
If you want informations, please contact us.

Thankyou for the information you really saved my germany group.
P.S. it wasn't in the book
19
zoecat

does anybody knowwho germany imports and exports to???
20
mandy

thanks for the best agricultural products.i too hope to change the agriculture setting of Uganda.
22
Jeffrey VanNortwick

I am seeking historical agriculture information when German Emperors ruled during the Holy Roman Empire of German Nation.
Specifically wine districts that belonged to the Emperor.
23
Ganesh Acharya

Hi i am from nepal.i Am plannig to do some new method of farming on my country can you please give me some idea
24
jack

Hi I am from Paynesville, Minnesota in the United states of America, in North America. I need help learning about Germany for my school project.
25
Govinda Pandey

In the present situation, how many percent of Germany land is used in Agriculture?
26
R,dousti

Hi, im an agricultueral engineer and i want travel to germany for work and a new life, can you help me?
27
Dakoda

I am a Namibian looking for a training about agricultural bases in Germany.I have my own land were I can start-up farming
29
Omoha Martha

Hi I m Omoha Martha from Nigeria and will like to travel to Germany to learn more on agriculture. Am an agricultural economics student rounding up from the University this year,and will like to further for more knowledge
30
Michelle

Hi am doing a country report on Germany and I find that this site is very helpful because on one of our slides it has to be on natural resources and agriculture. I will probably do well on it because of this site. My last conclusion is that everyone should you this site at least once.
31
Jifin George

How can a foreigner start farming in Germany ? Is there any special visa for that?
32
Ayana Rogers

Does Germany have a commercial or subsistence agriculture?
33
Daria :)

Which fertilizer is more effective ? The organic or inorganic.
35
Alex Muwaya

I am a Ugandan farmer seeking farms that can donate old tractor(s) or other equipment to our farming community in Belongs Sub County Luuka district to improve our Livelihoods.
Any help, please contact me