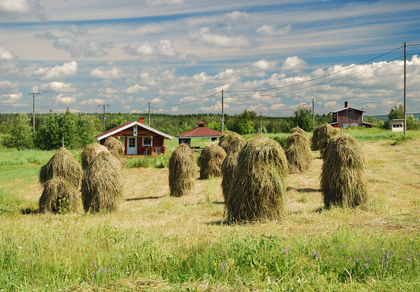 Finland's severe winters; short, frost-interrupted growing seasons; and relatively scarce and acidic arable land has made agriculture a continually tough endeavor. Before the end of the 19th century, Finland was so isolated from the rest of the world that its farmers focused on grains to feed the local population. In the 1880s and 1890s, cheap grain from Russia and the Americas began to flood the market, while simultaneously, dairy products began to be in more demand domestically and abroad. Finnish farmers began to use the imported grain to feed dairy cattle and other livestock, a pattern that has persisted to the present. Arable land is nearly always combined with forests, which cover approximately 70 percent of Finland. Most farms have survived by a combination of farming and forestry. Farms in the more arable south and west focus less on forests than those in the more wooded north and east.

Productivity has increased and the number of farms has decreased since the 1960s. This is partly due to advances in agricultural technology, which required fewer people on the land, and partly to the expansion of the industry and services sectors, which have attracted people towards factories and the city. The traditional Nordic emphasis on family farming has meant that the image of the family farmer is a culturally heroic figure, which may have helped farmers resist the urge to set up huge impersonal agribusinesses . In 1999, average farm size in Finland was only 25 hectares (62 acres). The Finnish tradition of cooperative organization has meant that small farms coordinate marketing, transportation, and processing of agricultural and forestry products. Finland's desire for self-sufficiency in basic foodstuffs supported a system of subsidies for the remaining farmers, until the 1995 accession to the EU forced price equalization. Equalization meant a 50 percent or larger reduction in many producer prices. The price of a kilogram of eggs, for example, fell by over 75 percent in 1995. Finland's own budget had to try to cushion the blow, but during the first 3 years of EU membership over 10 percent of Finnish farmers gave up farming. Currently only 4 percent of the population engage in farming. Of the agricultural products exported, dairy products topped the list in 1998. Finland is a net importer of agricultural products, with a total value of agricultural exports of US$1.31 billion and imports worth US$2.3 billion in 1998.

Since the decline of other agricultural production in the past decades, forestry is now the most significant contributor to agricultural production, with a turnover in 2001 of around FMk10 billion. Due to improvements in management and harvest techniques, Finland's timber reserves have increased by over 25 percent since the 1970s. Much of its forest production goes to its industrial sector to make paper products, while a significant percentage goes to create wood products like furniture as well. Finland produces 5 percent of global forestry goods, and its printing and writing paper exports are 25 percent of world production.

Finland's fur industry dominates the world market for farm-raised foxes, accounting for over half of global fox pelt production in 1997 with revenues of US$2.55 million. Finnish mink furs also have a high reputation on international markets. Commercial fishing, once quite important to the economy, has gradually become less significant, currently accounting for only 0.1 percent of the GDP. The decline can be attributed to river pollution and dams built for hydroelectric works, which have adversely affected natural spawning habits.

I like the article. The Ugandan agriculture is still struggling and many times yields fall below our food security requirements. We would want to enjoy your experience on cooperatives and agricultural mechanisation.

hello,
Im from sri lanka, it is great article. im interested it. i love Europe people and it's society. my hobbies are planting fruits vegys, flowers and photography of nature and people. i have special skills of making cakes, also had skill certificates of bakery. im interesting to work to finish people free. meaning without any salary. i love to work with finland farmers for couple of months. i have my own family business in sri lanka. i love to help finish people. if u contact any farming gentlemen or gentlewomen tell them my msg to them.
thank u again for this article.
3
Francis Antony Stanley

I really enjoyed reading the article as it has been quite informative and educational. It's my pleasure to jot down a few words about the efforts of the farmers to keep the arable land productive. It is good to know that most farms have survived by a combination of farming and forestry. I would be pleased to make a visit provided opportunity opened the door. May this country prosper and be able to serve many in the coming days.
4
Craig H.

I hope Finland's agriculture becomes much stronger. It is vital that all European countries become more independant and free themselves from the globalist slavery agenda.