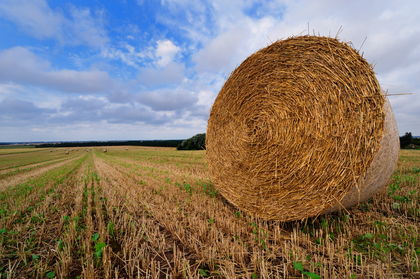 Denmark is the only country in the Baltic region with a net export of agricultural products, producing 3 times the amount of food it needs for itself. A good percentage of arable land and moderate climate has been conducive to agriculture, but the sector's extremely advanced technology and infrastructure are what have made it so productive in recent years. Although agriculture's role in the Danish economy has steadily decreased as industrialization and economic development has progressed, it is still essential as a source of foreign currency, a direct and indirect source of jobs, and as a supply of everyday foodstuffs.

The increasing mechanization of agriculture, combined with changes in farm management and organization, plus the draw of industrial employment in the cities, has meant fewer people are required to farm ever-increasing quantities of land. Farm sizes have increased, and the number of individual farms has dropped dramatically since the 1950s. From the 1970s into the 1990s, 2,600 individual holdings disappeared every year, absorbed into larger farms. In the first half of the 20th century Denmark had around 200,000 individual farms, averaging 16 hectares in size; by 1997, there were about 60,900 farms averaging 43.6 hectares. Family-run farms are still dominant in Denmark, where even in 1997, some 91 percent of farms were family-owned and run, 7 percent company-owned, and the rest owned by the state, local authorities, and foundations. Along with increasing farm size, the typical farmer has to an increasing extent concentrated on one sole branch of farming, and specialization in animal production has led to fewer types, but larger numbers, of livestock.

In 1996, primary forestry occupied approximately 3,000 employees, while forestry formed the basis for most of the work for around 34,000 employees in the wood manufacturing industry. Denmark is Europe's primary supplier of Christmas trees. Profits from forestry have historically been invested both in modernization of the industry and in investment in other industries. The state is the largest owner of forests, with one-third of forested land under its control. The rest is owned by a multitude of private companies, individuals, and institutions.

In the early 1990s, Denmark was among the top 10 to 15 fishing nations in the world, catching 1.6 million tons in 1993. Industrial fishing (catching fish for industrial use, i.e. producing fish meal and fish oil) has been the most important branch of fishing with a total catch in 1993 of 1.2 million tons. In 1993, the export value of the fishing industry was around DKr10 billion, corresponding to some 4 to 5 percent of Denmark's total exports.

Environmental legislation has been on the increase in the past decade, some of which has directly affected productivity. For example, the greater emphasis on forests and parks has meant that some land had to be turned away from farming use. New restrictions on waste disposal and contamination have also forced some farmers to limit or end production.

hi
i am glad to find a page as usefull as your page on tne net
i wanna ask do u cultivate pumpkin in denmark or how
much people consume every year?
i can tell u about my idea later on if u give me the statstics please!
2
SURAJ LAMA

I am visiting Denmark in July, 2011. I am looking for information in Farms and Agriculture Products in Denmark. I would appreciate if anybody could provide me with any information that I could use while I am in Denmark.

Very interesting article.
You mentioned that 7% of farms are company owned.
Could you tell me where can I find a list of these companies to get in contact with?

On the other side, for the rest (91%) family owned, how do they finance their acquisiton of technology? Credits or gathering in farmers organizations? I would appreciate the information.

Thank you very much in advance
4
Twalugembe

What an intersting article. Am an aspiring farmer and I am interested in knowing more about modern ways of farming

I do farming i want to expand my to European countries hence Denmark.
What should l grow at my and that should have market in your country?.
How should l do it?
8
Jossy Farms

Do you organise seminal,training and seminer for the local farmer?If there is any could you pls update me with the date and how to apply for the coming one.Thanks.
9
zifac

how do you treat this farmer when they are been affected, and what chemical are advice to be use so as to improve this crop
10
anon

Stupid article. It was so misinformative and gay. trololol
11
chabota mwiinga

I would like to study agriculture from Denmark.someone please help me with a university or college that offers agriculture related courses.will realy appreciate.

What is the percentage of farmers in Denmark? I can't find it anywhere.Please answer as soon as possible.
13
fahime helali

Very interesting article.
could you tell me where can I find a list of companies about agriculture for business works .
I am Phd student of agronomy - physiology in IRAN .
thanks
14
Irfan Mushtaq

Helpful information. We are doing Agri business in UAE. Regarding fodder, can somebody help me by sending contact details of farms/producers.
I know quality is there. I want to know about feasibility of importing Agri products in UAE.
Regards
15
Beltus nyambi mofor

I am a cameroonian living in the northwest region . I am a farmer with abt 50hectres of land. I am in need of farming partners
16
Joy evans

I am from Nepal. I have agriculture and livestock farm in Nepal. I want to change agriculture patten of my country. Do you have some training or seminar for modern agriculture style. Please inform me, its would be great please for my country.
18
NYASHA MACHINGURA

I am from Zimbabwe.I do Farming here,i also have a Diploma in Commercial Farming and I am looking forward to change ways of doing farming to venture into new technologies that are good.Do you have some free training that you offer for individuals like me.It is my heart burning desire to visit Denmark for a free short training,please help if they are any.