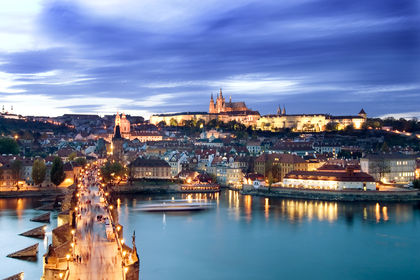 The Czech Republic is located in Central Europe. It is surrounded by Germany to the northwest, Poland to the northeast, Slovakia to the southeast, and Austria to the south. The total area is 78,866 square kilometers (49,007 square miles). The terrain is generally composed of rolling hills and some mountainous areas. Its 4 borders total 1,881 kilometers (1,159 miles), and it has no coastline. Its size is comparable to Mississippi (48,434 square miles) and Louisiana (51,843 square miles).

Because many of the manufacturing plants that were privatized after communism featured outdated equipment, foreign direct investment has been extremely important in determining which industries survive the transition to a market economy. The primary foreign investments have been in the area of consumer goods and tobacco, transport and communications (including equipment, commerce, and services), petrochemicals, financial and insurance affairs, mineral products, and electricity, gas, and water supply. By 1999 over 800 foreign companies had set up manufacturing subsidiaries, each employing more than 50 persons in the Czech Republic.

With increasing investments in the automotive sector, the Czech Republic is expected to become the third-largest auto manufacturer in Eastern Europe, after Russia and Poland. Other fast-growing sectors are electronics, precision engineering, environmental technologies, and software development. The government offers incentives for investment in high-tech products or machinery, and has begun a program to support the development of industrial zones throughout the republic.

The traditional Czech industries of glassmaking and beer brewing survived the economic transition in the form of the glassmaking company Bohemia Glass and the brewing companies Pilsner Urquell and Budvar/Budweiser. Companies producing transport equipment, such as Tatra Trucks, Zetor tractors, and Škoda cars, also remain visible in the current Czech economy. Other products that continued to be manufactured after communism include trams, planes, motorcycles, buses, and machines.

The most important products mined in the Czech Republic are coal and uranium. The coal is primarily used for heating purposes, while the uranium is used for the production of weapons, and a significant amount of uranium is exported. While uranium was exported almost exclusively to Soviet bloc countries before 1989, it is now exported more widely.

In the second half of the 1990s prices for commercial construction increased for small and medium enterprises, as well as for domestic non-financial corporations. The largest price increases for commercial construction were from firms employing more than 300 persons (especially for those employing more than 500), and for foreign non-financial corporations. Price increases for these types of structures indicated a higher level of demand relative to supply.

Czech Republic has no territories or colonies.

Doing Business in the Czech Republic: Whatever You Need to Know. <http://www.doingbusiness.cz> . Accessed January 2001.