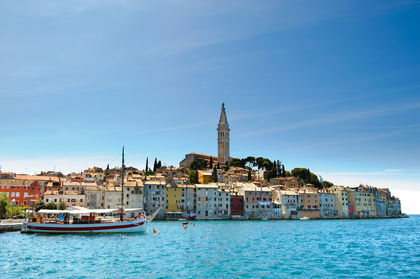 The Republic of Croatia is located in southeastern Europe, with a long coastline on the Adriatic Sea to the south, and borders with Slovenia and Hungary to the north, and Yugoslavia and Bosnia and Herzegovina to the east. It has an area of 56,538 square kilometers (21,829 square miles), approximately the size of West Virginia. The country's coastline stretches for 5,790 kilometers (3,598 miles), and consists of 1,778 kilometers (1,104 miles) of mainland coastline and 4,012 kilometers (2,493 miles) of island coastline. The capital, Zagreb, is located in the northwestern corner of the country. Other major cities include Osijek, Pula, Rijeka, Zadar, Split, and Dubrovnik.

With 76.5 percent of its inhabitants Roman Catholics, Croatia is predominantly a Roman Catholic country. Although the majority of the population is Croatian, other ethnic groups include Serbs, Bosnian Muslims, Hungarians, Slovenians, and Czechs. Approximately 18 percent of the population is under 15, about 67 percent is aged between 15 and 64, and the remaining 18 percent is over the age of 65. According to 1997 figures, the majority of people (56.5 percent) reside in urban areas, showing a significant increase from the 1975 figure of 45.1 percent. By the year 2015, urban dwellers are expected to number 64.4 percent of the population. Although population density is only 83.5 people per square kilometer (216 per square mile), the population is not evenly dispersed. Almost a quarter of Croatians reside in the capital city of Zagreb and its suburbs, while many of the country's islands and rural areas are very sparsely populated by mostly elderly inhabitants.

Like several other European countries, Croatia is experiencing the problem of very slow population growth. The government recognizes the problem but has done very little to address it.

The exploitation and management of forests in Croatia is carried out by a public company. Since one-third of the country is covered by forests, this industry is very important for the economy. In 1996 Croatia received a loan from the World Bank for replanting and protecting forests along the coast in order to stimulate tourism.

In the early 1990s total industrial output declined, partly due to the war but also because of the collapse in trade among Eastern European countries. During this time, Croatia lost a large share of its Yugoslav markets when the Yugoslav federation fell apart. After the war, industrial output began to recover, but major restructuring of industry and more investment is still necessary in order to increase efficiency. Due to a high unemployment rate of over 20 percent, the government is reluctant to worsen the situation by laying off industry workers.

Key industries in Croatia include textiles, chemicals, pharmaceuticals, and petrochemicals. The textile industry is especially well-developed and includes over 400 enterprises, the majority of which are engaged in cooperative activities with foreign manufacturers. In 1998, all of the key industries combined employed over 400,000 people and earned more than US$3 billion from exports. In the same year, the total export revenue across all sectors was approximately US$4.5 billion.

Two important heavy industries are ship building and metal products. Both were subsidized by the government during the war because of their strategic importance, but it remains unclear as to whether this subsidy continues. Growth of the construction sector has seen substantial expansion with the need for mass building and reconstruction caused by the war, and the government has been leading the building program and looking for international aid. The value of construction projects rose from almost US$1 billion in 1995 to over US$1.4 billion in 1997. During the same period, the number of employees in the sector rose from 23,600 to 29,500. This sector has drawn interest from international investors, such as the United Kingdom's RMC International Cement, which bought a majority stake in Croatia's largest cement producer, Dalmacijacement.

Production in this sector has been increasing but is not able to keep up with the country's increasing demand. Currently, between 10 and 20 percent of the demand is satisfied by imports, but plans by the Croatian Electricity Board (HEP) are under way to build additional plants and renovate existing ones. The electricity sector, together with oil, gas, and water supply, employs almost 26,000 people, accounting for 2 percent of the total workforce .

This sector has experienced substantial difficulties, both because of the war and the slowness in privatizing Croatia's only energy company, INA. By 1995 the production of oil and natural gas fell to 73 percent of pre-war levels. In 1999, Croatia extracted over 1.2 million metric tons of oil and over 1.5 million cubic meters of natural gas, representing a decrease in production over previous years. The country's oil and gas reserves are located southeast of Zagreb, along the border with Hungary and along the Adriatic coast. As of December 1998, Croatia's oil and natural gas reserves were estimated at 15 million metric tons and 35 million cubic meters respectively. The country's demand for extra gas supply is satisfied by imports from Russia, but projects have begun with foreign investors to develop new gas fields. These are expected to produce enough to export gas to other countries in Eastern Europe.

Tourism is of major importance in a services sector that accounts for over 70 percent of the GDP. Croatia is not only rich in natural beauty and history but enjoys a very low crime rate and a reputation as a safe destination. These factors have made it a favorite vacation spot for many Europeans and Americans, but tourism was heavily affected by the war, and the revenue it currently generates has not yet regained pre-war levels. A year after the war started, this sector earned only half a billion U.S. dollars. As the stability returned to the region, earnings from tourism gradually increased, reaching US$3.5 billion in 2000. During the 1990s, the country not only suffered from war devastation, but little was done to develop and restructure the tourism sector. This work started in 2000 when privatization of hotels and businesses was speeded up and tourism expenditure increased.

The improvement in political stability towards the end of the 1990s brought an increase in the number of tourists visiting the country. In 1998, the Croatian Bureau of Statistics recorded over 31 million overnight stays, which was 3 times as much as the 1992 figure. This number, however, still does not compare to the pre-war years, such as 1989 when more than 61 million overnight stays were registered.

Currently, Croatia has a total capacity of 725,000 beds, almost 95 percent of which are located in the coastal region. It also has 43 marinas, 17 of which are open year-round, but many of these are in dire need of reconstruction and better management.

Croatia is situated along major routes linking South Central Europe with the world, and its transport services are of major importance to the country's well-being. During the war, one-third of the country was occupied by enemy forces, causing disruption to main traffic links between different areas and a substantial increase in transportation costs. Since the war, greater regional stability has improved the situation, and the construction of a highway that will connect the country's southern region with its northern areas and the rest of Europe will greatly contribute to expansion and further improvement of service. According to the Croatian Bureau of Statistics, transport, storage, and communication employed over 83,000 people in 1999 and earned more than US$1.6 billion in the same year.

Croatia has no territories or colonies.

Useful information, i am doing a project and this article was very helpfull
2
Carolyn

our article is so helpful. It makes me want to learn more about your beautiful country and someday come for a visit.