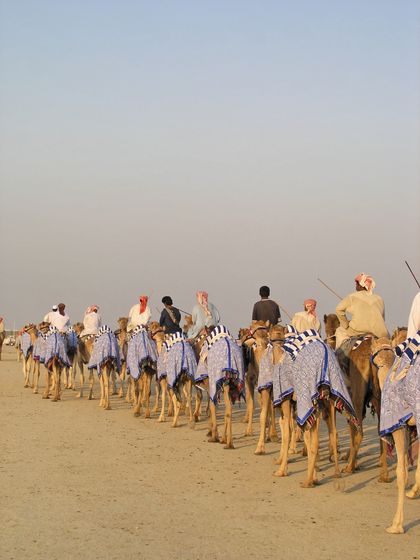 The United Arab Emirates (UAE) controls the southeastern portion of the Arabian peninsula south of the states of Bahrain and Qatar. The federation covers 82,820 square kilometers (31,976 square miles) and is bordered on the north by the Persian Gulf and Iran, on the east by Oman, and on the south and west by Saudi Arabia. The UAE separates Oman from the Musandam peninsula and extends 90 kilometers (145 miles) along the Gulf of Oman, an area known as the al-Batinah coast. The UAE is slightly smaller than the U.S. state of Maine.

The principal causes of this rapid population growth are the federation's booming economy and the govern-ment's encouragement of UAE nationals to have large families. The UAE government provides substantial financial incentives for UAE nationals to marry each other and to raise large families. The UAE government hopes that this would help to balance the federation's population, which is overwhelmingly composed of expatriates.

Oil is the foundation of the UAE's economy and will be so for many years to come. Current estimates suggest that the federation has more than a century of oil supplies. Oil production represented more than a third of GDP in 1999 and virtually all of the government's revenues. These revenues are also important to government spending, on which most non-oil UAE industries are dependent. Abu Dhabi, Dubai, Sharjah, and Ras al-Khaimah all have some level of oil production, but Abu Dhabi dominates both the UAE's production and reserves. According to the U.S. Energy Information Agency (EIA), Abu Dhabi has crude reserves of 92.2 billion barrels, or slightly less than 10 percent of the world's total, and 92 percent of UAE reserves. The EIA also reported that total UAE oil production for 2000 reached 2.29 million barrels of oil a day but that Abu Dhabi's recent investments could push production closer to 2.7 to 2.9 million barrels. Generally Abu Dhabi has reduced its production to ensure that the UAE stays within OPEC (Organization of the Petroleum Exporting Countries) production guidelines.

The UAE is also blessed with the fourth largest gas reserves in the world: 212 trillion cubic feet, which is about 4 percent of the world's total. These reserves are expected to last for about 150 to 170 years. Abu Dhabi controls 92 percent of the UAE total, while Dubai, Sharjah, and Ras al-Khaimah control the rest. The UAE has soaring domestic demands for gas production. Abu Dhabi has initiated a multi-billion-dollar program to address this need. The most ambitious part is the Dolphin gas project, which proposes to ship gas from Qatar's North Field to the UAE (principally Abu Dhabi and Dubai), Oman, and eventually to Pakistan. Significant funding is still needed for the project, but the Economist expected managers will be able to find the necessary funding because the project involves 4 national governments.

Finally, there is copper in Fujairah and Ras al-Khaimah, talc in Fujairah, and manganese in all of the northern emirates. It not clear whether there is enough of any of these minerals to justify commercial mining.

The Economist estimated that the UAE has invested $6.8 billion in industrial development over the last 30 years, spurring the creation of 1,000 factories with more than US$20 billion in direct investment. The dominant industries have been chemicals and plastics (closely connected to UAE crude oil supplies) along with aluminum. Dubai Aluminum is a leading supplier of aluminum to the GCC states and accounts for 60 percent of Dubai's non-oil exports. The UAE government also has made significant investments in petrochemicals and other "downstream" hydrocarbon industries— "downstream" meaning those that involve refining petroleum. In addition, the government is encouraging local-foreign ventures to invest in manufacturing and offering low-interest loans through the Emirates Industrial Bank to private financiers willing to invest in manufacturing in the UAE. Fifty percent of all manufacturing centers are in Abu Dhabi, while Abu Dhabi, Dubai, and Sharjah collectively controlled 93 percent of the UAE's industrial production in 1998.

A key source of local-foreign investment in manufacturing is the "offsets" program, launched in 1991. It requires arms manufacturing and military aerospace firms to invest 60 percent of the value of their sales to the UAE in non-oil UAE industries. It is designed to take advantage of the current glut on the world arms market and to escape the traditional dilemma of choosing between spending on guns or food. By law, a UAE citizen must retain 51 percent of the capital in the partnership. Virtually all offset projects must be completed within 7 years. If the obligations are not met by the target dates, the company is penalized 8.5 percent of the unfulfilled portion of the obligation.

Another key contributor to UAE industry has been free trade zones. The most important free trade zone is Jebel Ali Free Trade Zone in Dubai. Jebel Ali in 1999 boasted 1,600 corporations and nearly $2.5 billion in investments. The zone's principal advantage was that it allowed companies investing more than Dh1 million (US$272,479) to be 100 percent foreign owned. It also boasts some of the best transportation facilities in the world and has become a regional transportation center, servicing the U.S. Navy, among others. Since the founding of Jebel Ali in 1985, the other UAE emirates established their own free trade zones, which have sought to replicate Jebel Ali's success.

The UAE has a thriving tourist industry centered in Dubai, which has 70 percent of the country's hotels. Dubai features horse races, desert safaris, golf courses, and a number of five-and four-star hotels. The emirate also has shopping festivals, such as the Dubai Shopping Festival, where goods are heavily discounted. The purpose of these festivals is to attract visitors. According to the festivals' organizers, nearly 2.5 million people vacationed in the emirates in 2000: they came mostly from Britain, from surrounding states, and from the states of the former Soviet Union. Fujairah, which faces the Indian Ocean, has witnessed a considerable upsurge in vacationers in recent years. Retail has generally benefited from this upsurge except when a strong yen increases the price of imported Japanese consumer goods .

For much of the 1980s and 1990s, the UAE underwent a building boom with new office buildings rising daily in the UAE's major cities, particularly Dubai and Abu Dhabi. In recent years, there have been reports that the boom is slowing, that UAE developers are taking a more reasoned/scientific approach to building, and that there is even a sign of a glut of office space in Dubai. Still, Dubai continues to build new hotels. The Saadiyat project in Abu Dhabi promises 28,000 new homes, a bridge valued at US$220 million, and a new trade center valued at US$95 million.

Finally, a rapidly emerging sector in the UAE economy is re-export, whose value, according to UAE government statistics, almost doubled between 1990 and 1998. At that time, foreign trade hit US$10.6 billion. The center of UAE re-export trade is Dubai, which accounted for 40 percent of the federation's re-export trade in the late 1990s. Among the most important markets for Dubai's re-export trade are Iran and the southern countries of the former Soviet Union. Reportedly Dubai also served as an entryway for smugglers attempting to circumvent U.S. sanctions against Iran imposed in the mid-1990s.

United Arab Emirates has no territories or colonies.

hello
I appreciate your article . I have just one question: What time this article has written? is it update?
Thanks very much.
Majid Hojjati
Tehran, Iran
3
nirav