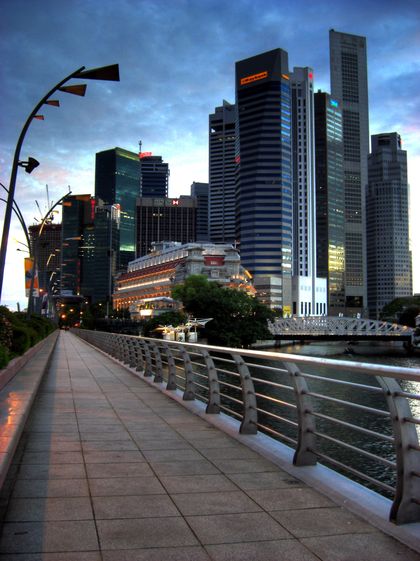 Singapore is a city-state in Southeast Asia, located about 137 kilometers (85 miles) north of the Equator. It consists of 1 major island and 59 small islands. Singapore lies at the center of a major sea route connecting the Far East to Asia, Europe, and the Middle East, which gives the country its strategic importance. It is separated from Malaysia to the north by the narrow Johore Strait and from Indonesia to the south by the wider Singapore Strait. The country has a land area of 637.5 square kilometers (247 square miles), but no land boundaries, and its total coastline is 193 kilometers (120 miles). The territory of Singapore covers a slightly smaller area than that of New York City.

The population of Singapore, which is entirely urban, was estimated at 4,151,264 in July 2000. In 2000, the birth rate stood at 12.79 per 1000 people, a low level attributed to urbanization and birth control policies, and the death rate stood at 4.21 per 1000. The estimated population growth rate is 3.54 percent. Such a high rate is due to the high net immigration rate, which stood at 26.8 immigrants per 1000 people. These immigrants form a large community of foreign temporary workers estimated at about 10 percent of the total population. Singapore has one of the highest population densities in the world, with about 6,500 people per square kilometer (or 16,800 per square mile).

the age of 14, and just 7 percent is older than 65. The current ethnic distribution was formed in the 19th century when the British administration encouraged people to migrate to Singapore from neighboring Malacca, the Indonesian islands, India and especially China.

In 1957, Singapore's population was approximately 1.45 million, and there was a relatively high birth rate. Aware of the country's extremely limited natural resources and small territory, the government introduced birth control policies in the late 1960s. In the late 1990s, the population was aging, with fewer people entering the labor market and a shortage of skilled workers. In a dramatic reversal of policy, the Singapore government now plans to introduce a "baby bonus" scheme in 2001 that will encourage couples to have more children.

Singapore wants to limit the inflow of illegal immigrants. The effect of drugs and drug trafficking is another important issue, since Singapore lies near the "Golden Triangle," an area between Burma, Laos, and Thailand that is the world's largest producer of illicit drugs such as opium. Singapore is among the few countries in the world to have adopted the death penalty for possession and sale of drugs. New chronic diseases like AIDS are also of great concern to the Singaporean government, since the country is a busy tourist destination.

Singapore belongs to the "New Industrialized States" (NIS), the countries that underwent rapid industrialization from the 1960s to the 1980s. During these 2 decades, Singapore managed to attract technology transfers from the developed world as well as sizable foreign direct investment (FDI). The island has a small mining industry that is of no importance in the national economy.

Singapore has a diverse, well-established, and economically important manufacturing sector, which contributed 28 percent to GDP and provided employment for 417,300 people, or 21.6 percent of the workforce, in 1999. Since the early 1990s, the manufacturing sector's share in GDP has been slowly declining due to the steady rise in competition from neighboring countries and the expansion of its own service sector. The United States remains the single largest investor in Singapore's economy. In 1999, about 57 percent of FDI commitments came from the United States.

Singapore began its industrial sector in the 1960s, using its superior location and well-trained and educated labor force. The industrial sector initially consisted of electrical assembly, oil refining, and shipping facilities. The electronic sector became the country's most important manufacturing element. This sector underwent a rapid expansion in the late 1960s when Texas Instruments and other multinational corporations established assembly plants in Singapore.

In the 1990s, there was further growth in the manufacturing of different electronic products and computer components. In the late 1990s, Singapore became the world's largest producer of computer disk drives. In 1999, electronics accounted for 43.4 percent of value-added manufacturing in the country, making Singapore vulnerable to downturns in the international market. Most of these goods are produced in foreign-owned plants for export to the United States, Europe, and East Asia. Electronics manufacture was affected by the 1997 Asian financial crisis, although the Singaporean government supported the sector by tax breaks and other initiatives. After 1997, several multinational corporations such as Seagate, Western Digital of the United States, and others laid off staff and began restructuring their production capacity. Some considered moving their manufacturing operations to neighboring countries such as Malaysia, Indonesia, and the Philippines, where wages are lower than in Singapore.

Tourism is an important sector of Singapore's economy, providing employment for 118,900 people. Although Singapore was long known as a tourist destination for sailors, business people, and adventurers, mass tourism began in earnest in the 1970s and 1980s with the increase in international air travel. The number of tourists visiting the country rose steadily throughout the 1980s and 1990s, reaching 7.29 million in 1996. There was a decline of about 1.3 percent in 1997 and 13.3 percent in 1998, due to economic turmoil in the region. In response to this decline, the Singapore Tourism Board started "Tourism Unlimited," a program promoting regional tourism and developing tourist projects near Singapore. In 1999, about 6.96 million tourists visited the country, contributing S$11.2 billion dollars to the national economy.

Singapore promotes itself as a "dream destination," offering excellent service, a multicultural environment, local hospitality, exotic festivals, and tax-free shopping. To boost its competitiveness it has also signed visa-free agreements with most countries in Asia, Europe, and the Americas. According to the national authorities, in 1998 Singapore had 108 hotels with total room capacity of 32,000. Most visitors come from the ASEAN countries, Japan, Taiwan, Australia, the United Kingdom, and the United States. In the 1990s, Singapore reinvented itself as Asia's convention city. In 1996, the capital hosted 4,795 international and regional conventions with 426,000 foreign participants. According to the Union des Associations Internationales, Singapore ranks seventh among the world's major convention cities.

The financial and business services sector is one of the most important sectors to the Singapore economy and provides employment for 266,000 people. Finance rests on the traditional foundations of the banking system, investments, insurance, and foreign exchange. There were 154 commercial banks in 1997, although banking was dominated by the "Big Four": the DBS Bank, the United Overseas Bank (UOB), the Overseas Union Bank (OUB), and the Overseas-Chinese Banking Corporation (OCBS). According to the IMF, Singapore is the world's fourth-largest global exchange center. The financial sector, particularly its banking component, has been tightly regulated by the Monetary Authority of Singapore (MAS), prompting sharp criticism from the United States and the World Trade Organization (WTO).

Although the 1997 Asian financial crisis affected the financial sector, there were no major bank collapses or bankruptcies. In 1997, Singapore's benchmark Strait Times Industrial Index (STII) fell 30 percent, leading to the STII being replaced by the simplified Straits Times Index (STI) in August of 1997. In 1999, the STI experienced some recovery due to an upturn in the manufacturing sector. The MAS reinforced its strict policy against internationalizing the Singapore dollar by limiting overseas lending and borrowing by non-residents. This policy restricts use of the currency outside the country for activities unrelated to the domestic economic development. However, economic recovery has improved the Singapore government's fiscal position, and it intends to deregulate and gradually liberalize the financial sector.

The business services sector (including property services, accountancy, and information technology), the fourth-most important economic sector in 1999, experienced difficult times in the late 1990s. During this period, economic recession and declining investments in neighboring countries led to less demand for financial and business services and brought a sharp decline in spending in the property market.

Singapore's well-developed retail sector provides excellent service to the local population and to foreign tourists. Large, state-of-the-art supermarkets are complemented by thousands of small retail shops where tourists and local consumers can buy different products. Singapore has long been recognized as a major tourist shopping destination offering, among other things, the latest electronic products free of tax. In 1998, there were 281,200 people employed in the wholesale and retail trades. After the decline of 1997 and 1998 this sector recovered, with the value of retail sales up by 12.1 percent and their volume up by 14.1 percent.

Singapore has no territories or colonies.

Machinery and equipment (including electronics), chemicals, and mineral fuels.

Singapore is an excellent country. I visited first and then thought of taking my family to show a country of just 637.5 sq.km can do wonders. Night safari and other places are too good. A great memory for me.
2
ypril rose anne malana

why is it that the Singapore is called the computer country ?
3
D

The statistics kept referring to the last century, hence a seems outdated. It should also include more current data and statistics to reflect current reality. Singapore's population and economic strength has grown much bigger and stronger from 2 decades ago. It's has also evolved to be one of the world's and definitely Asia's key financial centre as well as Asia's top Fintech and Technology Hub. I believe these points are worth a mention to properly portray the current Singapore.