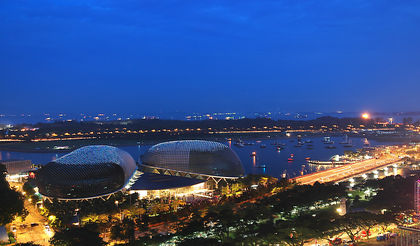 Singapore inherited from the colonial era a superior infrastructure and well-developed transport network. After independence, the Singaporean government made many efforts and sizable investments to improve these even further. This small city-state is served by a network of 3,122 kilometers (1,940 miles) of highways, 99 percent of which are paved. In the 1970s and 1980s, there was a steep increase in private car ownership, which led to traffic congestion and rising air pollution. The government reacted swiftly, investing significant sums in public transport, especially the mass transit system. It also restricted private car usage on Singaporean roads, using different measures, including taxes and Certificates of Entitlement. By the 1990s, 83 kilometers (51 miles)

of mass rapid transit system, and 11 kilometers (6 miles) of light rapid transit system had been built, and the country could boast of an excellent public transport system, praised for its safety, quality of service, and punctuality. In 1998, the government launched a S$1.7 billion project to build a new transit line. There were at that time 681,924 registered motor vehicles, including 378,090 cars, 11,410 buses, 133,382 motorcycles and scooters, and other vehicles.

Throughout the colonial era, the port of Singapore was an important military base and commercial seaport. After gaining independence, Singapore maintained its status as an important regional transport hub. Its seaport is believed to be one of the world's busiest ports in tonnage terms, with 140,922 vessels making up a shipping weight of 858 gross tons calling at the port and total container traffic of 15.14 million 20-foot equivalent units. It also has one of the largest commercial shipping registers in the world. Its merchant marine included 891 ships (1,000 gross registered tonnage and over) in 1998. Singapore also houses the third-largest oil refinery in the world with a capacity of 1 million barrels a day (1998). Major petroleum companies, including Shell, ESSO, Caltex, British Petroleum, and Mobil, operate there.

The government has invested heavily in the development of aviation, signing air service agreements with 90 countries, including "open skies" agreements with the United States, New Zealand, and Brunei Darussalam. The Civil Aviation Authority of Singapore (CAAS) oversees and regulates development in this sector. There were 9 airports in Singapore in 1999. The largest is Changi airport (a subsidiary of CAAS), which hosted 61 airlines and handled 23.8 million passengers in 1998 alone, making Singapore one of the major airports in the region. The 47-hectare (116-acre) Changi Airfreight Center handled 1.43 million tons of air freight movement in 1998. The government planned to invest a further S$1.5 billion in upgrading the airport facilities in the first decade of the 21st century. Singapore Airline (SIA) was created in 1972 after the split of Malaysia-Singapore Airline. SIA and its subsidiary, SilkAir, operated 87 aircraft, employed 18,800 people, and carried 12 million passengers a year in 1998. In 1998, SIA was ranked fourth in terms of international freight measured in ton-kilometers, and eighth in international passenger-kilometers.

Singapore is fully reliant on imports of mineral fuel for domestic consumption, and these imports accounted for 9.3 percent of merchandise imports in 1996. This makes the country vulnerable to unfavorable fluctuations in world oil prices. Electric power is produced from fossil fuel at 3 power stations. Electricity production was recorded at 28.586 billion kilowatt-hours (kWh) in 1998.

Telecommunication services in Singapore remain under state control. Telephone service is provided by the state-controlled Singapore Telecom (ST). The country had 54.6 million telephone lines and 1.02 million mobile cellular telephones in 1998. The government has attempted to end ST's monopoly . In 1993, it sold about 7 percent of its share to private companies and, in 1997, ST's monopoly on mobile and pager services came to an end. In 1998, there were 8 Internet service providers in the country and 458.4 computers per 1,000 people, which is more than in the United States. In 2000, the Singapore government announced a S$1.5 billion investment over 3 years into the e-Government Action Plan, which should enable Singaporeans to access a wide range of online services.