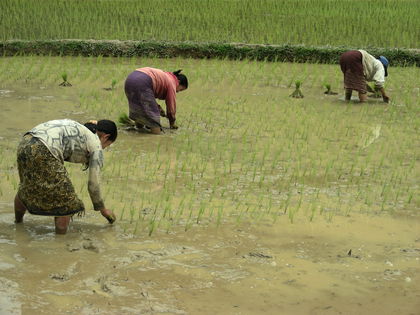 The Lao PDR is primarily an agricultural economy, with this sector contributing 51 percent of the GDP. Approximately 1,880,000 individuals are involved in agricultural work. Recently the Lao PDR conducted a major agricultural census which provides an excellent overview of the basic nature of Laos' agricultural system. The results of this survey indicate that 79.7 percent of the total population is engaged in farming. The average land holding is 1.62 hectares with 27 percent of households having 2 hectares or more and 36 percent having less than 1 hectare. An impressive 97 percent of farmers own their own land. About 93 percent of the area devoted to rice production is for the production of sticky rice, a subsistence crop used primarily for home consumption. Tree farming is another important part of Lao agricultural life. About 23 percent of such farms have mango trees, 17 percent coconut trees, 17 percent banana trees, 11 percent jackfruit trees, and 11 percent tamarind trees. Also 8 percent of farmers are engaged in aquaculture, and 71 percent do other fishing. Roughly 31 percent of farmers have cattle, 48 percent water buffaloes, 49 percent pigs (73 percent in the case of Hmong people), and 73 percent chickens.

Only 6 percent of farmers sell their total output, while 35 percent sell some of their farm output. This means that the majority of farmers (59 percent) are engaged solely in subsistence agriculture. The basic staple of such farmers is the production of sticky rice for local consumption. Unlike its neighbors Thailand and Vietnam, the Lao PDR is not a rice exporting country. Their goal is simply to attain self-sufficiency in rice production, which is possible in good weather years. The production of sticky rice may be supplemented by vegetable gardens; animal raising (goats, chickens, ducks, turkeys, pigs); and mango, coconut, or banana trees. Some maize is also grown. In the tropical forests of Laos, there are also many edible wild plants and foods that are gathered, primarily by women. Hunting and fishing also supplement the subsistence diet and provide valuable protein. Lao greatly enjoy fishing.

In terms of tons of agricultural production, the top 5 crops in Laos in order of importance are rice, vegetables and beans, sugarcane, starchy roots, and tobacco. Since 1990, among these 5 leading crops, production of vegetables and beans has grown the fastest in percentage terms, followed by sugarcane. In the decade since 1990 rice production has increased 47.9 percent. Among agricultural products often produced as cash crops are mung-beans, soybeans, peanuts, tobacco, cotton, sugarcane, coffee, and tea.

Given its subsistence nature, Lao agriculture has not played a major role in the country's foreign trade. The major export products from Laos' agricultural sector are timber, lumber, plywood, and coffee. The major agricultural imports are sugar, condensed milk, and long-grain rice.

Numerous city dwellers have rural roots and the Lao love gardening. Thus, some urban dwellers supplement limited cash incomes by having gardens, small fish ponds, or raising animals. They also may engage in fishing in the Mekong River, hunting, and the gathering wild foods. Some urban dwellers in the capital of Vientiane cultivate gardens along the Mekong River during the dry season.

Thank you for this information that I was looking for regarding the agriculture. This information will help me greatly with a project I am working on.

Your information is great; however, it would be really important that you indicate what year it is from, especially in regard to stats and numbers.
5
Ninja

what are the main types of farming in laos. for example shifting agr. truck farming etc.
6
anousone

that so great information for investment or promote agriculture in laos. but i would like to know when this information had survey?

How can you compute the percentages of the crops production? can you divide that percentages to get a 100% total?
8
Monica White

I appreciate the information provided.
I've gained a better understanding of the Hmong American Farmers Associatikooon of farmers that are located in both Minnesota/California in the US.
Thank you!