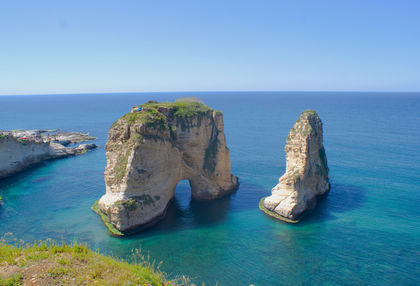 Situated in the Middle East, Lebanon is a small country on the eastern shore of the Mediterranean Sea. Lebanon has a narrow coastal plain along the Mediterranean Sea, which is 225 kilometers (139.8 miles) long and is bordered by Syria on the north and east and by Israel on the south. A small country, Lebanon's total area is only 10,400 square kilometers (4,014 square miles), roughly two-thirds the size of the state of Connecticut in the United States. Beirut, the capital, is located in the center and overlooks the Mediterranean Sea. Other major cities include Tripoli in the north and Sidon in the south.

Lebanon's population is highly divided along both religious and confessional lines (the presence of groups of different faiths within the same religion). Muslims in 2001 were believed to have accounted for 60 percent of the population. Christians form the second largest group in the country. Lebanon is also home to some 200,000 Palestinian refugees, mostly Sunni Muslims, many of whom have lived in refugee camps since arriving in the country in 1948. For political reasons, no official census has been conducted since 1932. Muslim and Christian factions in Lebanon were engaged in a devastating civil war that began in 1975 and ended in 1990, when stability was restored to the country.

As in many developing countries, a majority of Lebanese (around 90 percent) live in urban areas. The population is unevenly distributed, with the vast majority of the population concentrated in the coastal cities of Beirut, Sidon, and Tyre, while other parts of the country, namely the Bekáa Valley, remain sparsely populated. The uneven population distribution has given rise to regional disparities. The coastal cities continue to receive much government attention, while the rest of the country has remained largely neglected. The population of urban areas has grown significantly since the 1960s, mostly because the cities have received more government funding and attention. In 2000, the capital Beirut and its suburbs was home to 1.3 million people. The northern city of Tripoli is the second largest in the country, with an estimated population of 450,000.

developed in the region. As a result, Lebanon also has one of the highest average life expectancies in the region, at 68.5 years. Infant mortality in Lebanon is also low by regional standards.

Historically, and unlike neighboring Arab countries, Lebanon has never gone through a state-led industrial growth phase, and the governments have generally adopted an open policy that has encouraged free competition in the sector without government interference. Lebanon's industrial base is by all means modest, mostly comprised of family-based small firms. Most finished and semi-finished goods are imported. Much of Lebanon's local manufacturing consists of producing goods for local consumption—mainly food, furniture, and clothing manufacturing. The most important industrial activity is focused on food, beverages, and chemical products, which receive the highest level of investment. Manufacturing activity is concentrated in the population centers of Beirut and Mount Lebanon, where an estimated 60 percent of the firms are located. Some 19 percent of manufacturing firms are located in the north.

Since the end of the civil war in 1991, the manufacturing sector has had to struggle to regain its pre-war competitiveness and invest heavily in new equipment. During the war, several factories were forced to close as a result of the armed hostilities, declining consumer spending, and lack of funding. Major barriers facing the sector in 2001 are rising customs duties and political instability, 2 difficulties which have prevented many multinational companies from establishing subsidiaries in Lebanon. The U.S. State Department stated that "the sector's outlook remains bleak, as high operating costs, low productivity, obsolete equipment and limited access to medium and long term credit impede the performance of the sector."

With no commercially exploitable mineral deposits, Lebanon has no significant mining base. Quarrying for marble, sand, and limestone for cement production, however, has accelerated in recent years. The output is mostly consumed locally for construction, and only a tiny fraction is now being exported.

Tourism was once a very important contributor to Lebanon's economy, accounting for almost 20 percent of the GDP in the 2 decades before the start of the civil war. Since the end of the war, the sector has managed to revive somewhat, but tourism has yet to return to its pre-war levels. Tourism in 1999 accounted for 9 percent of the GDP. In 2001, the tourism sector was one of the fastest growing sectors of the economy, with the number of tourists visiting Lebanon between 1996 and 2000 growing at the rate of 14 percent annually. Lebanon's rich archeological and cultural heritage, coupled with a mild climate and diverse terrain, has been a major attraction to tourists.

Successive governments have invested heavily in the sector, and there has been substantial investment in building luxury hotels and upscale restaurants, in response to the return of tourists (mainly Gulf Arabs) to Lebanon, especially in summer. It is estimated that there are 12,000 hotel beds, with 90 percent located in Beirut and Mount Lebanon. Some 860 additional hotel rooms will be built in 2001 and another 1,200 will be added in 2002. Despite continued political instability, growth in the tourism sector is expected to pick up in the coming years, especially after the Israeli withdrawal from south Lebanon in May 2000.

The most important sector of Lebanon's service industry is the financial services industry. The sector lost most of its importance during the civil war with the flight of the majority of foreign firms, but there has been a concerted effort to renew the sector since 1991. As a result, the sector grew rapidly in the 1990s, mostly the result of investment in government debt and reconstruction and reported double-digit growth throughout the 1990s.

Financial services continue to undergo expansion and consolidation, especially of small family-owned banks. Several international banks now have offices in Beirut. In an effort to present Lebanon as an international financial center, the government announced in 1995 a series of financial laws aimed at preventing money laundering . In particular, one of the passed laws gives international investigators access to the accounts of Lebanese banks.

Banking, by far the most profitable sector, employs some 15,000 people. Before the civil war, Lebanon was the banking center of the Middle East, owing to its liberal banking regime, one of the most liberal in the Arab world. Several Arab and foreign banks pulled out of Lebanon during the war, but by 2001 several of these banks had returned. However, most of them have only small branches in Beirut, and the pre-war interest in Lebanon's banking sector is yet to return.

There are some 67 active commercial banks in the country, in addition to small family-owned enterprises. Most of these banks are up to international standards, largely due to concerted government efforts to tighten regulations and increase capital adequacy requirements.

The Beirut Stock Exchange, closed in 1975 with the outbreak of the civil war, re-opened in 1995. Trading, which began in January 1996, has been thin, and the number of listed companies has been relatively small. There is a total of 12 listed companies, including 4 financial institutions, 1 car retailer, and a supermarket chain. Weekly trading in 2000 rarely exceeded US$2 million.

The construction sector grew at a very fast pace between 1991 and 1996, contributing to an average of 6.5 percent growth in the GDP. The sector's growth was in response to the influx of huge sums of private investments, mostly from Lebanese expatriates and Gulf Arabs who were devoted to the reconstruction of residential and commercial buildings destroyed during the war. These investments were coupled with large-scale government projects to rebuild the country's infrastructure, including the US$400 million project to rebuild Beirut International Airport and the complete renovation of downtown Beirut by the quasi-government company, Solidere.

Since 1996, the sector's contribution to GDP has dropped, as private investments and government spending began to dwindle. The slowdown was partly brought about by the oversupply in some areas of the construction market, especially in housing. International and domestic confidence in Lebanon's stability also dropped significantly in the aftermath of Israel's military operations in Lebanon in the summer of 1996.

Lacking many large commercial centers other than Beirut and its suburbs, Lebanon has a poorly-developed retail sector. While Beirut is home to a variety of retail stores, including fast food franchises such as McDonald's, Burger King, and Starbuck's, the majority of towns in the interior of the country have small family-owned shops, farmers' markets, and temporary roadside stands.

Lebanon has a booming advertising industry that ranks second in the region in terms of size and profitability after Dubai. Some 150 national and international advertising agencies are based in Lebanon, employing some 8,000 people. In the absence of reliable statistics, the sector's revenue is believed to be in the range of US$150 million annually. The largely unregulated sector is dominated by the country's 4 television stations and the print media, which account for 55 percent and 34 percent of the sector's revenue, respectively.

Lebanon has no territories or colonies.

There are coins, 250 and 500 being most common, although you may come across 100 lira coins. The smallest note is 1000 lira.
2
Uptown Cheapskate

wow great i have read many articles about this topic and everytime i learn something new i dont think it will ever stop always new info , Thanks for all of your hard work!
3
david shears

I would like to know what is the link between Leanon and Sierra Leone. When did the Lebanese first go to Sierra Leone