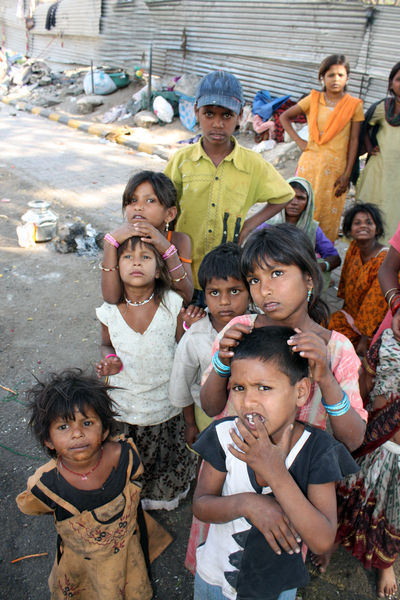 At the time of India's independence famine and severe malnutrition were periodic occurrences, and life expectancy was only about 30 years. Due to improvements in health care and agriculture, by 1970 life expectancy had reached 50 years, and by 1993 it was 61 years. Infant mortality fell from 137 per 1,000 live births in 1970 to 71 in 1993. In agriculture and food production, India has also made great progress. While it was a nation dependent on food imports to feed its population after independence, it is now largely self-sufficient in food production. It has done so, to an extent, by enacting policies that have favored impoverished working-class citizens and farmers.

Despite improvements, by 1994 it was still estimated that 1 in every 3 Indians lived in what could be categorized as absolute poverty—a total of 310 million people. In essence, more Indians were estimated to be poor than the whole of sub-Saharan Africa. Currently, though starvation is something of a distant memory, a large part of the Indian population remains too poor to afford an adequate diet. According to the Indian Institute of Population Sciences, more than half of all children under the age of 4 suffer from different degrees of malnourishment. Diseases such as diarrhea, diphtheria (caused by bacteria leading to inflammation of the heart and nervous system), pertussis (whooping cough), tetanus (also known as lock-

jaw), and measles, long done away with in many countries, can still be found among some poor communities in India. Furthermore, due to iron deficiency, as much as 87 percent of all pregnant women are thought to be anemic.

Inter-and intra-state discrepancies in terms of education and overall well-being also remains large. The poorest quintile (one-fifth or 20 percent) of the population is estimated to have 2.5 times more incidence of infant mortality, double the fertility rate, and a 75 percent higher rate of child malnutrition than the average figures for India. The south and west of India have traditionally been better off relative to the north and east. Furthermore, irrigated plains are richer than primarily rain-fed regions. For a variety of reasons, some states such as Maharashtra, Goa, Delhi, and Gujarat have been able both to provide better infrastructure, such as power supply and telecommunications, to their peoples and likewise attract a significantly higher FDI than other states. Kerala has a high literacy rate and access to health care even though its GDP per capita is less than the Indian average. Kerala's fertility rate dropped to 1.8 children per woman in 1991, which is below the replacement level; in the same year, literacy in Kerala was over 90 percent, compared to India's average of 51 percent. Kerala's infant mortality in 1996 was 13 deaths per 1,000 live births; in all of India the number was 72 per 1,000 births. Schools and health clinics are available throughout the state, and newspapers are also available in most villages. There is also a strong commitment to equal rights for women in Kerala, where women occupy significant government positions. Kerala's elected communist government, together with an emphasis on local control, participation in government, and investment projects are all thought to be important factors for Kerala's better quality of life. Those especially vulnerable throughout India continue to be rural women, the disabled, and people of lower castes.

Poverty in many developing countries is more predominant in rural areas. Though that has also been true in India, the gap between rural and urban India was closing during the 1980s due to the continuing effects of state-sponsored expansion of irrigated agriculture and the green revolution. (This was the substantial increase in the production of food grains—such as rice and wheat—begun in the 1960s as a result of the introduction of improved plant varieties, better farming, and the application of newly-developed pesticides and herbicides.) By the early 1990s, however, India began to show signs of "Malthu-sian overload": Thomas R. Malthus (1766-1834) theorized that population tends to grow faster than its means of subsistence—food and other resources—and unless population growth is checked, it will inevitably lead to widespread poverty. The increases in food production brought about by the green revolution were not able to keep pace with the rate of population growth. This discrepancy was especially evident in the rural areas, where the majority of the people are farmers living off the land. The gap between rural and urban India since the early 1990s, therefore, began to widen again. Poverty, however, is not purely a phenomenon of rural areas. In recent years, for example, as a result of the population increase and the lack of sufficient waste disposal infrastructure, the city of Calcutta has seen an increase in the waterborne and communicable diseases such as tuberculosis, a problem exacerbated during the rainy season.

Illiteracy remains a major problem as well. The number of illiterate Indians actually rose in the 1980s. In the 1990s, successful government programs began once again to reduce illiteracy. Progress has been very slow, though. If India continues to reduce illiteracy by its current rate of approximately 2.8 percent per year, it is estimated that it would still take 16 years for it to reach the literacy rate of 90 percent, a rate which neighboring Sri Lanka currently holds. Even then, there would still remain 120 million illiterate Indians. Likewise, while fertility dropped from 6.0 children per child-bearing woman in the early 1980s to 3.8 in 1992, maternal mortality is a high of 430 per 100,000 live births, 23 percent more than the average of 350 for low and middle income countries.