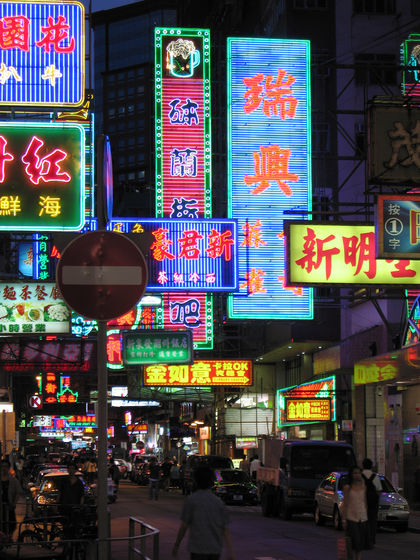 (SAR) of the People's Republic of China

Hong Kong is located in eastern Asia. It borders the South China Sea to the south, west, and east, and shares a land border with mainland China to the north. It consists of 4 main areas: Hong Kong Island, Kowloon, the New Territories, and the Outlying Islands. Kowloon and the New Territories are on a peninsula, accounting for the bulk of Hong Kong's land. The New Territories link Hong Kong to mainland China. The Outlying Islands are made up of 234 islands in the proximity of Hong Kong, excluding Hong Kong Island where the capital city (Hong Kong) is located; the island is in the southern part of the territory. Lantau Island and Hong Kong Island are the largest islands. The entire territory, including its islands, has an area of 1,092 square kilometers (421 square miles), which makes it 6 times larger than Washington, D.C. The length of its land border and coastline are 30 kilometers (18 miles) and 733 kilometers (455 miles), respectively.

The majority of Hong Kong's population is of Chinese ethnicity, but non-Chinese constitute more than 8 percent of the population. Out of 595,000 foreigners residing in Hong Kong in 1999, 274,100 were from Asian countries (Philippines, Indonesia, Thailand, India, Japan, and Nepal) and the rest from Western countries (United States,

Hong Kong is a highly urbanized society. About 95.4 percent of its population lived in urban areas in 1998, an increase of 5.7 percent since 1975. The urban population is estimated to reach 96.7 percent by 2015. The capital city of Hong Kong and the Kowloon peninsula house the majority of the population.

The Hong Kong government imposes tax on salaries, employment-generated incomes, pensions, property incomes, and on revenues of economic establishments. The simple tax system is characterized by low tax rates, varying between 15 and 16 percent. All individuals who receive salaries, wages, or pensions are liable for income taxes , which are not more than 15 percent of their income. As an equity measure provided by law, 61 percent of the workforce does not pay tax on salaries. All corporations or individuals involved in any type of trade, business, or profession are liable for taxes on their profits, excluding those generated from the sale of capital assets. There is a flat rate of 16 percent for the business profit tax.

The Chinese government cannot tax Hong Kong in any manner, as stipulated in the Basic Law and the Sino-British Joint Declaration. The Hong Kong government keeps all revenues, including taxes, for its own use. In February 1998, Hong Kong signed a treaty with China to eliminate double taxation of their respective businesses operating in each other's territory.

The judicial system of Hong Kong plays a major role in the economy. It is an independent body in charge of ensuring the continuation of the rule of law in all fields, including in the economy as set prior to the hand-over of Hong Kong to China and as stipulated by the Basic Law. This is essential for the free enterprise economy of Hong Kong, as it guarantees the right of its people to private property and to engage in legitimate economic activities. It also guarantees the unrestricted economic environment of Hong Kong and prevents government intervention in Hong Kong's economic affairs, which would have a negative impact on the status of the territory as a bastion of free enterprise. This status has been the major factor for the phenomenal economic growth of Hong Kong and its continued attractiveness to local and international investors. Finally, the continuation of rule of law is a guarantee against any attempt on the part of the Chinese government to intervene in the internal affairs of Hong Kong and to impose its laws and regulation on that territory.

The Hong Kong courts are in charge of upholding laws, rights, and freedoms, including respect for private property and all rights and laws necessary for the continuation of economic activities. These courts are independent and exercise jurisdiction over all cases except those falling under the jurisdiction of China's central authority, namely defense and foreign affairs.

Hong Kong has no territories or colonies.

Please make a what kind of large industry there for doing business. Such as for instance, any large corporation such as IBM,etc Ranking to contribution to their economy,etc.