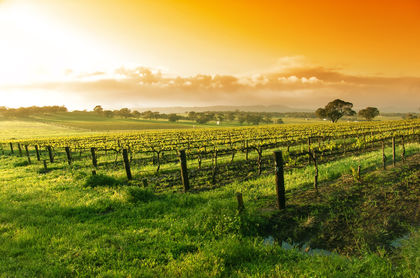 Historically, agriculture has been as important in the development of Australia, as it was in the United States. Australia's traditional dominance in wheat and sheep continues into the 21st century. Recently Australian agriculture has become increasingly diversified. The considerable expanses of arable land have helped Australia to become a leading world exporter of grains, meats, and wool. Both grains (predominantly wheat and barley) and wool markets around the world are dominated by Australian exports. The market for cattle is more regional but is becoming increasingly important globally, given health concerns about European-produced beef. While only about 6 percent of Australia is suitable for crops and pasture, a considerable amount (60 percent) of the land area is suitable for cattle grazing.

Agriculture contributes roughly 3 percent of the GDP and employs about 4 percent of the total workforce directly. While the sector's contribution to the GDP is small, raw and unprocessed agricultural commodities contribute about a quarter of Australia's total export earnings each year. Australia exports a great deal more agricultural produce than it imports. In 1998 agricultural exports from Australia were estimated at US$15.14 billion, in comparison to the US$3.11 billion worth of agricultural imports for the same year. The main agricultural crops grown in Australia are wheat, coarse grains (barley, oats, sorghum, maize, and triticale), rice, oilseeds (canola, sunflowers, soybeans, and peanuts), grain legumes (lupins and chick peas), sugarcane, cotton, fruits, grapes, tobacco, and vegetables. The main livestock production is in sheep (wool and lamb), beef, pork, poultry, and dairy products. Exports account for over 90 percent of wool and cotton production, nearly 80 percent of wheat, over 50 percent of barley and rice, over 40 percent of beef and grain legumes, over 30 percent of dairy products, and nearly 20 percent of fruit production.

A notable characteristic of Australian farming and agricultural production is the extent to which net farm income varies from year to year. Australia's weather is subject to extreme fluctuations, which has an impact on annual production and ultimately on farm income.

Farm sizes range from relatively small part-time farms to operations of more than 5000 hectares. In general, Australian farming is characterized by large scale, highly mechanized and efficient operations, one of the key reasons why only a small percentage of the workforce is employed in this sector. Environmental factors have long been ignored in the production of agricultural commodities due to their importance to the economy. At the beginning of the 21st century, however, Australia is forced to pay more attention to the growing evidence of environmental stress and degradation caused by farming. In the past, the agricultural sector carried considerable political weight, being represented by the Labor and National political parties. Currently, there is increasing political pressure from urban residents to remove most subsidies and other forms of protection given to farmers. Australian farmers already do not receive many of the subsidies given to farmers in the United States and Europe.

I am presently in discussion with agriculture land owner company in Uruguay ; they are a family company with previous agricultural hands on experience as well as post secondary education . The Australian agricultural export to import balance may well provide some room to consider future import / export deals . Even though Australia exports more than it imports ! Given the recent take over by Canadian dairy product corporation of a major Australian company in the same product line , there may well be room to discuss the matter . My interest is investing or supporting investment !
5
Shannaya

We want to have more information about Australia as. It's very less in comparison to other sites
6
nakul patel

i from india i need help for agriculture farming start in australia.
7
Olabode Oludare