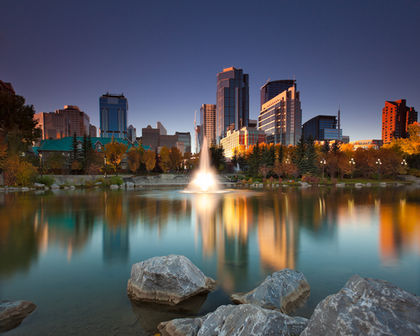 Canada has the seventh-largest economy in the world. Most of the businesses are privately-owned, although the government does play a major role in the health-care system and operates many services including transportation and utility companies. The Canadian economy is diverse and highly developed. It is very similar to the American economy, although smaller in size. In the aftermath of World War II, the nation was transformed from a rural economy, based on agriculture, to one based on industry and mining. The nation's economy has been further transformed since the 1970s and services now provide the main economic output.

The foundation of the Canadian economy is foreign trade and the United States is by far the nation's largest trade partner. Foreign trade is responsible for about 45 percent of the nation's gross domestic product (GDP). Free trade agreements between the 2 nations have increased trade by eliminating tariffs . Each day approximately US$1 billion worth of goods crosses the U.S.-Canadian border. To understand the scale of U.S.-Canadian trade, it is important to point out that the United States sends more products to Canada than it does to all of Latin America.

Despite the small size of its population, the Canadian economy is one of the most prosperous in the world. For instance, its GDP per capita was US$23,300 in 1999, reflecting Canadian workers' high wages compared to many other countries. Prospects for continued positive economic performance are good. Canada has a highly skilled and productive workforce. In 1999, there were 15.9 million people in Canada's workforce, and the nation had an unemployment rate of 7.6 percent, which was almost twice the American rate.

Like Americans, Canadians tend to have high levels of disposable income . This disposable income drives the Canadian economy as consumers spend their excess wages on a variety of products and services. This creates demand for increased production and the development of new products, which also means more and better-paying jobs. Also like the United States, advertising has a major impact on Canadian consumer spending. Television is the number-one form of advertising in Canada.

The nation's infrastructure is excellent and most of its factories and manufacturing plants are modern. In fact, Canada's transportation network is ranked as the best in the world by the World Economic Forum's Global Competitiveness Report. Canada has a variety of natural resources, including petroleum and natural gas, and a variety of metals and minerals. Over the past decade, Canada has also emerged as one of the leading nations in the high-tech and computer industry. Most of this growth has occurred in central Canada, mainly Ontario and Quebec, and is responsible for the increased migration of people to these areas. Much of the economic growth in Canada today is fueled by small-to mediumsized companies. Because Canada has abundant energy resources, the global oil crisis which began in 1999 has helped its energy companies increase their outputs and profits. The nation has abundant natural resources that include iron ore, nickel, copper, zinc, gold, lead, silver, timber, fish, coal, petroleum, natural gas, and hydropower.

Regionally, the Canadian economy varies greatly. In the Eastern provinces, marine industries—including fishing, telecommunications, and energy production—are the main components of the economy. In the French-speaking region of Quebec, the city of Montreal has become one of the nation's centers for high-technology firms. This includes a large number of computer software companies. There is also a large industrial base which includes companies that produce pharmaceuticals, aerospace products, and telecommunications equipment. Ontario is the nation's main industrial center. About half of all Canadian manufactured goods are produced in Ontario. The province is second only to Michigan as the largest producer of automobiles and car parts in North America. Ottawa, the nation's capital, is located in Ontario. Other industries include chemicals, aerospace, steel, and food processing. The plains (or prairie) provinces of Alberta, Manitoba, and Saskatchewan are the home to four-fifths of Canada's agricultural lands. They are also the home to the majority of mining and fuel production. Alberta itself provides 90 percent of the nation's energy exports and is the home of Canada's oil and natural gas industry. British Columbia is in the Pacific Northwest. Forestry and tourism were traditionally the main elements of the region's economy, but financial services, including banking and insurance, have grown dramatically over the past decade. There is also a growing high-tech sector that is bolstered by the province's proximity to American firms such as Microsoft in the state of Washington. The Northern territories of the nation comprise one-third of its total size, but are home to only 100,000 people. These areas are home to Canada's Native American population, many of whom continue to follow traditional lifestyles based on hunting and fishing. Mining is the principal industry and there has been steady growth in diamond mining and finishing. Tourism also provides a substantial part of the region's economy.

Each of the nation's main economic sectors is highly developed. Although the agricultural sector is small, it takes advantage of the nation's generous natural resources. Increasingly, agriculture and fishing are concentrated in certain geographic regions of the country, mainly the west and southeast. The United States is the main market for all Canadian agricultural exports. In addition, the United States is the main destination for most of Canada's timber exports. Canada is also a major supplier of energy resources, including electricity and petroleum, to the United States. While industry has declined since the 1970s, it remains an important component of the country's economy. Automobile products provide one of Canada's principal exports, but the nation also produces a variety of consumer products and machinery. Nonetheless, large companies such as Ford and General Motors provide a significant percentage of the nation's industrial output. Services have seen the most dramatic growth in the Canadian economy over the past 2 decades. In addition to consumer-based businesses such as retail and tourism, financial services and telecommunications firms have grown dramatically. The government has offered significant support to these new technologies. For instance, the government has supported the development and installation of the only fiber-optic network in the world which carries only Internet traffic. The system, CA*Net3, will have 16 times the capacity of the largest U.S. system.

Budget surpluses over the past 3 years have allowed the government to begin paying down Canada's national debt . The debt has been reduced by Can$19 billion, and in 2000 it stood at Can$565 billion. The surpluses have also allowed the government to spend more on federal programs and to reduce some taxes. The nation is a net donor of foreign aid. In 1997, it provided US$2.1 billion in international aid.

There are several potential problems facing the Canadian economy. The most significant is the continuing question over the status of Quebec. Should Quebec become independent, it would significantly disrupt the Canadian economy, and the nation would lose a sizable proportion of its GDP. The second most pressing problem for Canada has been the migration of some of its best educated and trained workers to the United States. This "brain drain" is the result of lower taxes and higher wages in the United States. Finally, Canada's dependence on trade makes it vulnerable to slow downs in the economies of its major trade partners. This is especially true of the United States. In the 20th century, when the United States experienced economic recessions or depressions, Canada soon after suffered similar economic problems.

What happened to the EU's 750 billion bail-out to keep Canada/US in the global economy? Will there be continued bailout bucks for companies of Federal interest/investment and truthfully, how stable are Canada's banks? If Canada's economy follows the USA's and their President's decline in popularity over the economy concern, what are we to expect entering into another winter --- more "Deep Freezes" on R&D, waning healthcare/HMO-takeovers & privatization, "Pulled" social programs, "Less is more" pertaining to more taken away from each University-educated brightest & best future, another recession/depression, more local-provincial-federal taxes, and what about the all-important reliance on pet food...we're all looking forward to this pate in forced early retirement?
2
Andrew

I'm not at all sure what you're on about here. Canadian banks have always been very conservative and well-regulated, and as a consequence are the most stable in the world, certainly far better than the U.S. ones and I understand better than EU banks, at least for the most part. There has been no bailout from the EU to NA - the EU bailout is internal to support the several countries with hopelessly broken economies within the EU.