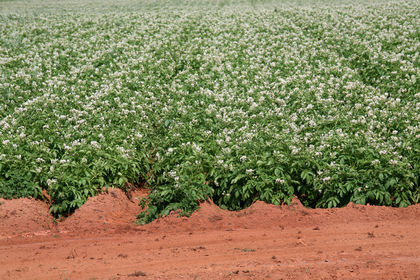 Agriculture in Canada is among the most sophisticated and technologically advanced in the world. Farmers use scientific crop and soil analysis as well as state-of-the-art equipment. By 1996, more than one-quarter of all Canadian farmers used a computer in the management of their crops and livestock. In 2000, there were 7,100 square kilometers (2,741 square miles) of irrigated land. While it produces substantial quantities of food for domestic consumers and for export, Canada also imports a significant amount of agricultural products. Total agricultural imports in 1999 amounted to US$10.8 billion. The United States supplies Canada with roughly two-thirds of its total agricultural imports. Conversely, the United States is Canada's main market for agricultural goods. In 1999, the United States was the destination for one-third of Canada's exports of crops, livestock, and fish.

While the overall number of Canadian farms continues to decline, the decline has slowed in recent years and several provinces are in fact adding or gaining new farms. The decline in farms has slowed to under 1 percent per year, the lowest level of decline since 1941. Since 1991, British Columbia has increased its number of farms by 12.6 percent, Alberta by 3 percent, Nova Scotia by 1 percent, and Newfoundland by 0.8 percent. Ontario continues to have the largest overall number of farms—over 68,000—followed by Alberta with 58,000, and Saskatchewan with 56,000. The total number of farms in Canada is approximately 275,000. The average size of a Canadian farm is 608 acres. Contrary to the trends in the rest of the country, British Columbia has experienced dramatic growth in the number of its small farms. About half of all new farms in the province have gross profits of US$10,000 or less. The number of new small farms in British Columbia has increased by 14.7 percent since 1991.

The nation's main crops are wheat, barley, corn, potatoes, soybeans, rice, and sugar beets. The dominant crop is wheat. In 1998 Canada produced 24,076,300 tons of wheat. However, there is less wheat under cultivation in Canada than at any time in the 20th century. This is the result of increased diversification and low worldwide wheat prices. The number-two crop was barley and the country harvested some 12,708,700 tons of it. Total crop output in 1998 was 53,701,500 tons. The primary livestock products are beef, chicken, duck, turkey, goose, and pork. Beef production is concentrated in the western areas of the nation while poultry production is concentrated in the east. About two-thirds of all poultry farms were in eastern Canada. Most livestock is consumed domestically. For instance, in 2000 beef production was valued at US$1.5 billion. Of this, US$70 million worth of beef was exported while the rest was consumed in Canada. The country also imported US$140 million of beef, almost all of it supplied by the United States. One out of every 4 farms in Canada raised beef.

One of the fastest growing segments of Canadian agriculture is organic products (food grown naturally and without pesticides, and sold without preservatives or additives). The organic food industry has been growing at a rate of 20 percent per year. There are now about 1,500 registered organic food producers in Canada. Organic production is strongest in the western areas of the country. There are also a growing number of specialty farms. For instance, there are now 1,593 farms whose main output is Christmas trees. In addition, the number of bison raised on farms for buffalo meat has tripled since the early 1990s, and the total number of head are around 45,000. There are also a number of exotic species, including llama and elk, being raised for sale in specialty markets. For instance, elk and deer antlers are sold to Asian nations for use in food products and tea. Specialized crop products include various herbs and spices such as garlic, ginseng, and coriander, cut flowers such as roses or lilies, and tobacco.

While fishing remains a prominent part of the economy of some provinces, depletion of fish stocks caused by over-fishing have led to significant declines in fish production. Fishing now accounts for only about 0.1 percent of the nation's GDP or US$3.2 billion per year. Since the early 1990s, fishing's share of the nation's GDP has declined at an average of 2 percent per year.

Environmental problems have created concerns for Canadian agriculture. One of the major problems is that of animal waste and fertilizer runoff contaminating waterways. In 1996, there were 61 million acres that were treated with some form of chemical fertilizer and 57 million acres treated with herbicides. This represents a 15 percent increase in fertilizer use since 1991, and a 7 percent increase in herbicide use. A second major problem is that of soil erosion caused by overproduction.

INTRESTED IN CANADA'S AGRICULTURE I WOULD LIKE TO COME FOR INDUSTRIAL TRAINING HERE IN CANADA. PLS REPLY ME FUR ANY UPDATE
2
gayu

it is very good .it has given me a lot of information .
3
RASAQ ABIOLA

Iam coming for my annual vacation in Canada (Ontario) between july ending August,may i find out if there is any seminar/conference/convention that i can attend on any aspect of agriculture.
4
Patrick

am studying a bout wheat growing in Canada especially in the Prairies! can i get more information from farmers at the farms!
5
neeraj kumar walia

I live in Pakistan. I want to buy some land in Canada and want to immigrate on that basis. I have small Farm of about 16 acres here where i grow wheat, cotton and sugarcane. And a small amount of onions and garlic is also grown by us. What will be the minimum cost of land and how much I will have to purchase and which province will be Suitable. Thanks.
7
jathh

This really helped me out with my research for a geography project.
8
rajneet sharma

this really helped me out with my research for a geography project.
9
Victor

I am looking to venture into Agriculture in Canada, after running same in Nigeria where I cultivate crops like Plantain, Cassava, Pepper, Groundnut, Yam and Vegetables. I equally run poultry and fish farm, please can you provide me with information including cost of acquisition of farmland and other reources including information and training available in Canada, especially in Saskatchewan, British Columbia and Alberta provinces
10
Anar

I am a good agricultural man. I can work hard for Canada. Is it possible?
11
Agnidhar Parajuli

I am from Nepal. May I find out if there is any seminar/conference/convention that i can attend on any aspect of agriculture?
12
farouq

Its the greatest I've ever seen. You know am a passion fruit farmer in Uganda, please how can you help me to improve our farming system
13
Noel Chimwanda

Very informative. I am interested in Canadian cereal production, Irish potato production, beef and dairy management. Also short courses on farm machinery operation and management. I am a farm manager at a Zimbabwean Government institute farm. Please advice me if government to government programmes exist.
14
KIM

I am enquiring about the farming programme available to women. I am a single-parent. What options do you have at the beginning of the year. Three to six months
15
Grace

This was a wonderful website to learn about crops in Canada.
16
esther sale

This report about Canada's agriculture is a great resource if you want to find facts. The facts were reliable and were useful in my project.
18
Tony

I am very interested in farming a coconut plantations, is there any such opportunity in Canada?
19
abul hasem

I am a good agricultural man. I can work hard for Canada. Is it possible?
20
Wakeel Afzal

This is Wakeel Afzal from Pakistan and settled in UAE. Now i want to move to Canada. My field of experience is Agriculture Extension Services and technically i am Agriculture Entomologist. Any one please guide me for next steps i should take for my settlement in Canada. Thanks in anticipation,