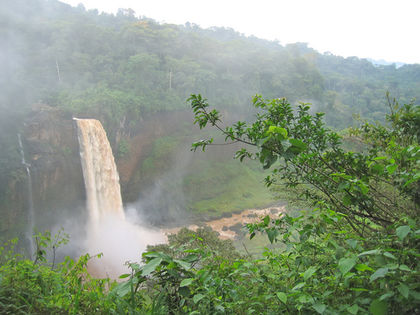 Located on the west coast of Central Africa, Cameroon covers an area of 475,400 square kilometers (183,695 square miles), slightly more than California. Land boundaries extend for a total of 4,591 kilometers (2,853 miles) between Nigeria to the northwest, Chad to the northeast, the Central African Republic (C.A.R.) to the east, and the Republic of the Congo, Gabon, and Equatorial Guinea to the south. The country also has 402 kilometers (249 miles) of coastline on the Bight of Biafra, part of the Atlantic Ocean. The topography of Cameroon is varied, ranging from tropical rain forests in the south to mountainous highlands in some western central regions, and semi-arid savanna in the far north.

The population of Cameroon was estimated at 15,421,937 in July 2000 and is growing at an annual rate of 2.47 percent. The birth rate is estimated at 36.6 births per 1,000 people and the death rate is 11.89 births per 1,000 people. If these trends continue, the population will approach 20 million in 2010. Cameroon has a very young population: 43 percent of its people are younger than 15, while just 3 percent are over 65. Though English and French are the "official" languages, there are 24 major language groups spoken by a diversity of ethnic groups. The CIA's World Factbook lists the religious composition as 40 percent Christian, 20 percent Muslim, and 40 percent indigenous beliefs, but these categories are not so neatly divided, as traditional animist beliefs are often mixed with Muslim or Christian beliefs.

The lumber industry is Cameroon's second largest source of export revenue behind petroleum, employing 25,000 workers and accounting for 7.4 percent of Cameroon's GDP. Cameroon's forest resources are concentrated in its southeastern provinces, near the borders with Congo and C.A.R. Cameroon has recently enacted laws to increase the processing of its forest resources by banning the export of raw lumber. Several foreign companies are competing in this industry and a total of 66 lumber-processing mills have been established. Annual production capacity has increased from 1.2 million cubic meters in 1994 to 2.68 million cubic meters in 1999, but lumber companies have been cutting down trees at an unsustainable rate. If the trend continues, Cameroon's forest resources will be almost exhausted by 2010. The government has enacted laws to improve the management of forest resources, but these laws have been poorly enforced.

An estimated 4 million Cameroonians depend on cocoa and coffee for their livelihood. Both commodities are produced by millions of farmers on small-scale farms. Cameroon is a major cocoa producer and exports approximately 120,000 metric tons of cocoa annually. In the late 1990s, annual coffee production has varied between 60,000 and 100,000 metric tons. Some of these commodities are processed locally, but most are exported to Europe. Coffee and cocoa prices recently fell to their lowest levels in nearly 30 years, thus reducing Cameroon's export earnings. Most of the country's coffee is produced in the western region of Moungo, while cocoa is produced primarily in central southern Cameroon. The coffee and cocoa industries were formerly under government control, but they were privatized beginning in 1995. Several hundred businesses initially jumped into the coffee exporting business, but several foreign firms have come to dominate the trade.

Banana exports have risen dramatically during the past decade, increasing from 80,000 to nearly 250,000 metric tons per year. This increase is due in large part to improved farming methods that have brought greater yields. In addition to these quantities for export, Cameroonian farmers produce another 700,000 metric tons of bananas and 1,300,000 metric tons of plantains for domestic consumption. Plantains are grown by individual small-scale farmers throughout southern and western Cameroon, while banana exports are produced primarily by 2 large companies in the southwestern region, the Marseille Fruit Company, and the Cameroon Development Corporation, which is currently being privatized.

Though productivity has recently increased, Cameroon's bananas are less competitive than Central American bananas. Cameroon is one of the leading suppliers of bananas to Europe, where the European Union has long offered them preferential market access. This has provoked a well-publicized trade dispute with the United States. In 1998, the United States won a decision from the World Trade Organization (WTO) to eliminate preferential access by 2006, putting less competitive Cameroonian producers at risk. Nevertheless, some observers believe that continuing gains in productivity will allow Cameroon's bananas to compete in 2006.

Cotton is produced in Cameroon's far northern provinces where it is the main cash crop . More than 300,000 farmers cultivate 172,000 hectares (424,840 acres) to produce 60-80,000 metric tons of cotton fiber a year. Cotton production is managed by a state enterprise, Sodecoton, that provides training for cotton farmers, supplies fertilizer and insecticides, and buys the crop. Sodecoton is in the midst of a slow privatization process. Cotton earnings have varied significantly according to fluctuations of rainfall in the northern provinces and prices on the international market. Prices have recovered some ground following their plunge in the 1980s and Cameroon's production has grown in recent years, but the cotton sector has not regained the profitability it enjoyed prior to the years of decline.

Rubber is produced primarily in the forested region of Niete, north of Yaoundé, by 3 agro-industrial companies, CDC, Hevecam and Safacam. The rubber yield plummeted from 58,000 metric tons in 1998-1999 to 32,000 metric tons in 1999-2000. The main producer, Hevecam, was purchased in 1996 by the GMG Group based in Singapore. Most of Cameroon's rubber is exported to the European Union. With average annual rubber exports valued at CFA20 billion (US$30 million), this industry provides 2 percent of Cameroon's export revenue.

Cameroonian farmers cultivate a variety of crops for domestic consumption, and increased their production throughout the 1990s. Cameroon has consistently been able to feed itself from subsistence crops that include plantains, corn, sweet potatoes, cassava, and millet. Farmers also grow a variety of vegetables for sale in local markets, while a number of fruits and vegetables are also exported to regional markets. In recent years, Cameroon has tried to decrease its reliance on traditional exports by encouraging the production of pineapples, avocados, plantains, and other foods for export to neighboring CEMAC countries.

Approximately two-thirds of Cameroon's rural population raises animals by traditional methods, keeping cows, goats, sheep, and chickens in their compounds. Farmers raise animals as savings, to earn extra income, and for their own consumption. In rural African culture, chickens and goats are slaughtered as a gesture of hospitality for relatives and important visitors. Some semi-nomadic families raise animals as their principal occupation, particularly in several northern provinces where much of Cameroon's meat is produced. Almost all of these animals are consumed in Cameroon. Overall, animal husbandry contributes an estimated 2.6 percent of the country's GDP.

Cameroon is the fifth-largest oil producer in sub-Saharan Africa and produced 100,000 barrels per day in 1999. Elf, Perenco, and Pecten International (a subsidiary of Shell) have produced crude oil from several different deposits. Petroleum production began in 1977 and reached a peak of 9 million metric tons in 1986, before declining to 6 million metric tons in 1996. Thereafter, production stabilized, and oil revenues in 1999-2000 surged from US$500 million to nearly US$900 million with the doubling of oil prices. In the late 1990s, Cameroon revised its laws to stimulate additional exploration, but has so far had limited success. One area where oil reserves hold promise is the Bakassi Peninsula, a region also claimed by neighboring Nigeria in a dispute that has been referred to the International Court of Justice. A state-owned company, Sonara, refines 1.5 million metric tons of imported crude oil and exports 40 percent of its product. Another state oil company, Société Nationale des Hydrocarbures (SNH), manages Cameroon's interests in the petroleum sector.

One of Cameroon's largest factories is an aluminum smelting plant in Douala, which produces aluminum from imported bauxite. In 1999, aluminum exports reached nearly US$100 million, representing 5 percent of the country's export revenues. Cameroon's cement company, Cimencam, operates a factory in Douala and one in Figuil, on the Chad border. In addition to the domestic market, these factories supply the entire markets of Chad and the C.A.R. Cameroon produces small amounts of gold in the eastern province near the border with C.A.R.

Beer and soft drinks are manufactured for the domestic market and are also exported to several neighboring countries. Two of Cameroon's 5 largest companies (measured in terms of annual profits in 1998-99) are beverage producers: Cameroon Breweries and Guinness. Cameroon Breweries, owned by the French company Castel, controls 70 percent of the beer market and holds licenses to produce several major international brands including Amstel, Mutzig, Castel, and Tuborg. It also produces Tanguy mineral water and Coca-Cola soft drinks. Guinness (based in the United Kingdom) holds 17 percent of the drinks market.

Cameroon has developed a number of small industries for processing its agricultural produce. The recently privatized domestic sugar company, Socucam, produces 100,000 metric tons of sugar for the domestic market. Panzani produces 4,500 metric tons of pasta in a factory in Douala, most of which is exported to regional countries. Cameroon makes Maggi bouillon cubes for cooking, while Chococam processes some of the country's raw cocoa to produce several chocolate products for regional markets. Cameroonians use copious amounts of palm oil in their cooking, and a number of companies produce approximately 100,000 metric tons of palm oil for the local market.

Cameroon has cotton and textile industries based in the northern provinces. Sodecoton gins Cameroon's raw cotton and sells 7 percent of its product to Cicam, a textile company. Cicam employs 1,500 workers at factories in Garoua and Douala, producing fabric sold on regional markets. Cicam is the largest textile producer in the Central African region, but it has experienced difficulties in competing against imports from Nigeria and East Asia. During the late 1990s, increasing imports of cheap used clothing from Europe and the United States reduced Cicam's domestic market.

Cameroon profits from its geographical position by serving as the principal transportation link for Chad, C.A.R., and other neighboring countries. Cameroon's railroad has traditionally transported large volumes of wood from Cameroon and the northern Congo and cotton from Chad and northern Cameroon. Cargo volumes are expected to increase in coming years when rail will be used to transport pipes, fuel, and other materials for the Chad-Cameroon oil production and pipeline project.

In spite of many problems, port services in Douala have thrived along with the transportation sector. Douala handles over 95 percent of imports to Cameroon, Chad, and the C.A.R. Cargo volumes exceeded 5 million metric tons annually in the late 1990s and Douala's capacity is estimated at 7 million metric tons.

A recent surge in telecommunications investment is expected to continue. Since the mid-1990s, 2 companies have begun investing in the provision of cellular services, and in 1998 the government divided the state telephone company into 2 entities, Camtel and Camtel Mobile. Camtel maintained a monopoly over fixed phone services, while Camtel Mobile offered cellular services. A second cellular license was sold to an affiliate of France Telecom, and Camtel Mobile was bought by MTN, a South African cellular phone company. The government is in the process of soliciting and evaluating bids from several foreign companies interested in buying a controlling share of Camtel. When Camtel is finally freed from government management, continuing investment and increasing access to telephone services will assure continuing growth in this sector.

There is a vast array of retail businesses of varying sizes in both rural and urban areas of Cameroon. Weekly rural markets attract farmers who sell their food crops while individual traders peddle a variety of household goods. Most durable goods, such as cars and household appliances, are sold in Yaoundé, Douala, and some provincial capitals. These urban centers also have shops offering a large variety of consumer goods.

Cameroon has no territories or colonies.

This website is definitely very useful and I would recomend it to anyone. Instead of chopping and changing onto different websites you can just stay on this one because it has all the info!
4
SONIA

exactly,nothing for us students who are engaged in research
6
Adem Pupla

This article meets my expectations of research on the country.
Congratulations. It just needs to be updated.

good job. i recommend for research site for student and Cameroonians in need of infos for their country