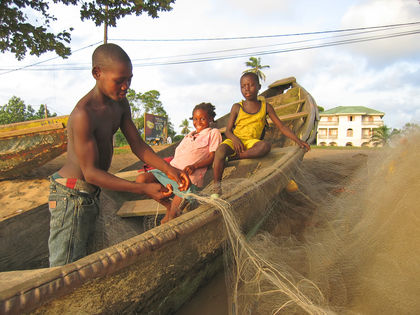 Since gaining its independence in 1960, Cameroon's economy has swung from a long period of prosperity to a decade of recession , followed by a partial recovery. The economy depends on the production of various raw commodities and has therefore been vulnerable to price fluctuations for these commodities. The country remains primarily agricultural, but it has gradually diversified into the production of petroleum and lumber, and the provision of basic industries and services. Its abundant natural resources, favorable geographic position, and relative political stability have allowed Cameroon to build one of the most diverse and prosperous economies in sub-Saharan Africa.

Following independence in 1960, Cameroon enjoyed 25 years of prosperity before falling on hard times in the mid-1980s. During that period, the country developed a prosperous and diverse economy, based on agriculture, petroleum production, and some basic industries. Beginning in 1986, however, the economy shrank dramatically as low prices for oil, coffee, and cocoa reduced Cameroon's export income. Oil production also began a steady decline during the 1980s and fell from 9 million metric tons in 1986 to 5 million metric tons in 1997. Cameroon's GDP declined by 30 percent between 1986

and 1995. In 1993, the government was forced to reduce civil service salaries by 30 to 50 percent in an effort to limit its spending and, throughout this period, it tried with little success to revive the country by making structural adjustments and reforms. Only during the late 1990s did Cameroon begin emerging slowly from the doldrums, averaging annual growth of almost 5 percent from 1997-1999.

Beginning in the early 1980s, petroleum became Cameroon's largest single export commodity, accounting for nearly half of export earnings. Although agriculture continues to occupy most of the country's workforce, petroleum contributes the largest share of its export earnings. Falling prices and decreasing production levels reduced oil revenues to 30 percent of export earnings in the 1990s, but a surge in oil prices doubled Cameroon's oil revenues in 1999-2000. Lumber is Cameroon's second largest export, providing an additional 20 percent of export revenues. Agricultural commodities, especially coffee, cocoa, bananas, and cotton, account for most of the remaining export earnings. Cameroon also produces a number of food crops and light industrial goods that are sold in domestic and regional markets.

Several advantages have enabled Cameroon to prosper more than its neighbors. The country is blessed with a wealth of natural resources, especially its fertile land, petroleum, and lumber. Unlike all of its immediate neighbors, Cameroon has not been damaged by any serious civil conflicts, and enjoys an advantageous geographic position between Nigeria and several central African countries that provide growing markets. Two neighboring countries, Chad and the C.A.R., rely on Cameroon's transportation system and the port city of Douala for links to the outside world.

Cameroon's long economic crisis of the 1980s and 1990s contributed to a rising debt burden estimated at nearly US$7.7 billion, or 84 percent of GDP, in 1999. Debt service payments have reduced the value of export earnings and consumed an excessive portion (33 percent) of government budgets. In late 2000, the International Monetary Fund (IMF) announced that Cameroon would qualify for the Heavily Indebted Poor Countries (HIPC) debt relief initiative, which will provide US$100 million annually to cover debt service payments. Increased oil revenues have also helped to reduce the government's debt burden.

Pervasive corruption and government mismanagement have seriously hindered Cameroon's economy by creating an unfavorable business climate and discouraging investment. Based on a poll of private companies, Transparency International rated Cameroon as the world's most corrupt country for 2 consecutive years in 1998 and 1999. The country's main port, Douala, is particularly notorious for its corruption, inefficiency, and high costs, but corruption exists throughout the government bureaucracy where civil servants routinely obstruct paperwork until they receive their "gumbo," or tip. The government has initiated high-profile attempts to fight corruption, but these practices are not widely accepted and it remains difficult to eliminate. Corruption was aggravated by Cameroon's long period of economic decline, culminating in the government's decision to cut civil service salaries by up to 50 percent in 1993. Though Cameroon fell to 7th in Transparency International's 2000 listing, corruption has continued to have an adverse effect on Cameroon's economic expansion.

Economic figures in the 1990s indicated that Cameroon had made progress in reducing some of these problems. Four years of solid growth during the late 1990s followed a decade of decline and, in 2000, the government began a second 3-year structural adjustment program that aims to continue privatization of state enterprises and improvement of public management. The government has also revised tax laws and undertaken reforms to encourage investment, while several infrastructure projects should also help the business climate. During 2000-2004, the Chad-Cameroon Development project, one of the largest infrastructure projects in Africa, will provide Cameroon with a major economic boost, particularly in the construction and transportation sectors. This project will invest US$3.7 billion to build oil production facilities in southern Chad, a pipeline across Cameroon, and associated infrastructure in both countries.

why is the economy of Cameroon dropping drastically will the generation of tomorrow survive let the government invest more in then agriculture sector in other to make use of it resources and make a better CAMEROON .
2
Wantock

Corruption and embezzlement has leveled our country to mare debris. An overhaul of the old regime has to fished out and the stolen billions recovered beginning from the number one citizen
3
Teke Johnson Takwa

Eventhough the are many reasons why Cameroon has economic problems, bad governance,long duration of some individuals in power and the lack of vision from our leadership are some of the key reasons why our economy will remain sleeping
4
glory munje

from the look of things it shows that a minor change has occur as many project are taken to meet the "millennium development goal".

This changes will only continue if the government put in practice the issue of employing the young in to public service and also the right person for the right job, or else the country will be in a stagnant state.
5
Justice M. Mbuh

CAMEROON: Performance in agriculture is ridiculous, the financial sector is in shams, regardless of praises from even the world bank and corruption is riff. Put simply, it appears there is a disjoint between policy formation,government policy and implementation--all plagued by conflicts of interest and other corruption dimensions. We need beyond intellectual probity, committed leadership and even divine intervention. Otherwise, how do we explain the fact that a country like Egypt, desert-locked with very little rain should produce more than ten times more grain than Cameroon sitting on the equator? Mind boggling!-JMM