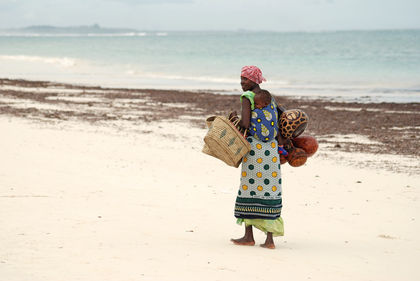 Botswana is a landlocked country in southern Africa, located just north of South Africa. Botswana has a total area of 602,957 square kilometers (232,802 square miles), making it about the same size as the state of Texas. The length of Botswana's border is 4,011 kilometers (2,493 miles), and its neighbors are Namibia to the west, Zimbabwe to the east, and South Africa to the south. The capital, Gaborone, has a population of about 135,000 and is located in the southeast of the country, almost on the border with South Africa.

Botswana is one of the few countries in sub-Saharan Africa with a fairly homogeneous ethnic background. The Batswanans make up 95 percent of the population, of which the Tswana tribes constitute 60 percent. The San people (also known as Basarwa, Khwe, or Bushmen) number 60,000. Population density is low due to the harsh climate of the Kalahari desert, at 2.6 people per square kilometer (6.7 people per square mile). The majority of Botswana's people live in the southeast of the country, where the desert gives way to the more fertile land of the Okavango river delta and swamp, and 50 percent of the total population lives within 100 kilometers (62 miles) of Gaborone. At independence in 1966 only 3 percent of the population lived in urban areas, but by 2000 this figure had risen to over 65 percent.

The rapid spread of AIDS in Botswana is a major reason that population growth is low. It is estimated that 25-36 percent of the population is infected with the virus, reflecting one of the highest rates in the world. This has caused a great number of social problems including labor shortages and a health care crisis. AIDS-related health and safety information is openly available, but cultural practices, social mobility, and the fact that Botswana lies on major trucking routes between South Africa and the north have contributed to the spread of the disease.

Mining provides 86 percent of the country's export earnings, most of this from diamond sales. However, the mining sector employs only about 4.4 percent of the formal labor force. The country has 3 main diamond mines, at Orapa, Lethlakane, and Jwaneng. These are all owned and operated by Debswana, an equal joint venture between the South African diamond mining company De Beers and the Botswana government.

Many of Botswana's mineral resources have not yet been discovered, but are presumed to exist given the country's geology. The area is expected to yield natural gas and crude oil; Central Botswana and the Kalahari Desert are perhaps the most likely sources of new discoveries. Though Botswana has tried to diversify its economy away from mining, the minerals sector continues to dominate the economy. Fortunately, the Botswana government saved and invested a portion of the country's mineral revenues, producing additional income for the country as well as providing investment capital for new industries.

Manufacturing contributes only 5 percent of GDP and employs only 8.5 percent of the country's labor force. Botswana exports most of its natural resources in raw form, with minimum processing. The Botswanan government would like more manufacturing companies to locate in the country, therefore it is focusing on the natural resources that may be used in manufacturing operations. Such resources include soda ash, which is used to produce detergents and fertilizers; and copper and nickel, which are used in electrical components. Other established manufacturing products include cement, food, and beer. In 1997 the Botswana Export Development Investment Authority was established to encourage the export of goods manufactured in Botswana.

Botswana has no territories or colonies.

i liked this article,i realy enjoyed it found it usefull on my market research project
2
paula

A nice article,really a nice country but i hope the percentage of the infected people with the HIV wll reduce or will not be increased.
4
Josalynn

Wonderful article Botswana my home is a great nation.